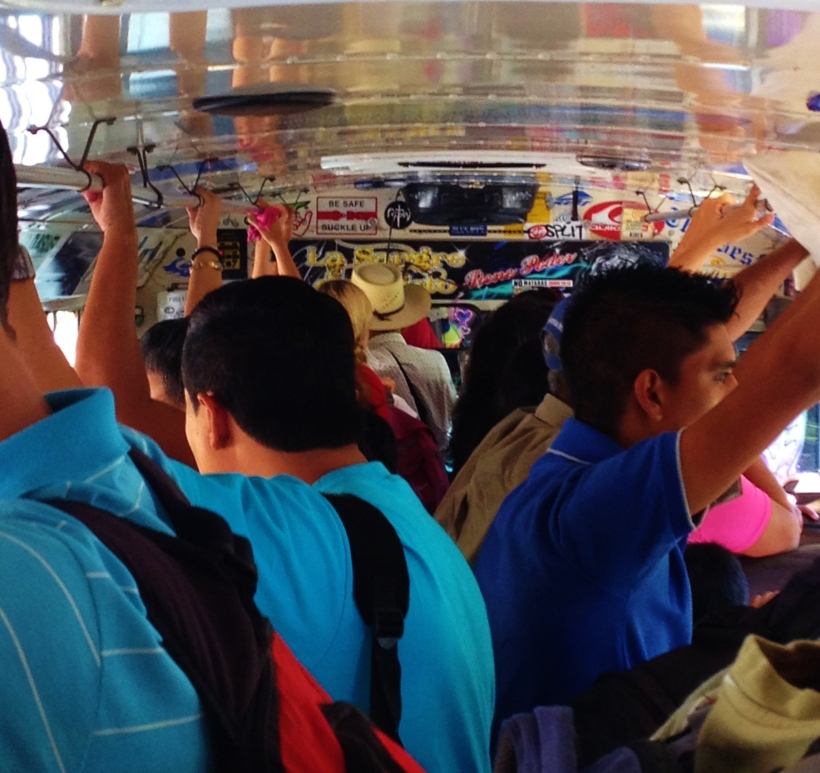 Be safe – Buckle up – A sticker on the front, probably from the days before it trundled along the coast of El Salvador

It’s time to leave the beach.  Not because we want to you understand, but because all good things must come to an end.  Also we have a boat booked to cross the Golfo de Fonseca into Nicaragua the next day with Ruta del Golfo (but it is cheaper to do it through Tortuga Verde in El Cuco if you get there, and probably a much better experience before!).  After some hard farewells, we take a bus back to La Libertad, then back into San Salvador where then get a #304 all the way to La Union.  The Journey takes 7 hours, not tough by any means, but it is sad to see the rest of El Salvador zip past us; through the sun kissed fields of the east along the Pan-American Highway.  Views at all times framed with fierce looking volcanoes, including the recently erupted and still smoking San Miguel. 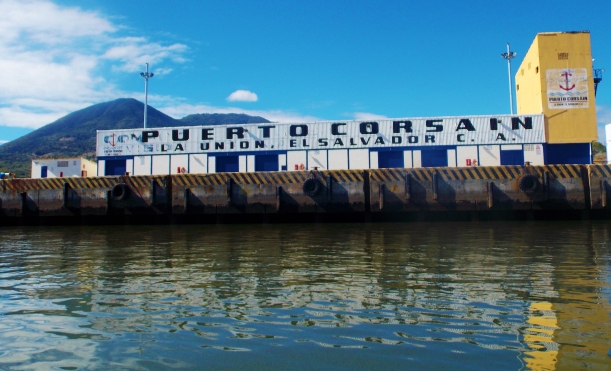 “Business or pleasure sir?”  I am asked this by an undercover store detective (not very undercover with gun and radio) whilst I browse the selection of sun screen at a supermarket in the port town of La Union.  An ominous tone accompanies the irrelevant question asked by this plastic official whose sole purpose was, I assume, to try and intimidate me for no good reason.  He then follows us from a distance and inserts himself into a conversation Ollie and I are having about cheese and ham, whilst his uniformed collegue (also with gun) looms further up the aisle, partially hidden by a stack of Doritos.  Sums up the feeling of suspicion we encountered in this shady/sketchy port town.  We retreat to our ‘hotel’ (that we assume is usually charged by the hour, complete with wipe clean faux-leather mattress and foul smelling bathroom) where we drink our beers and eat cream cheese sandwiches in the driveway, whilst wishing the night away.  La Union does not have the charm of the rest of El Salvador, but we were determined not to let that be our last memory of this enchanting little country. 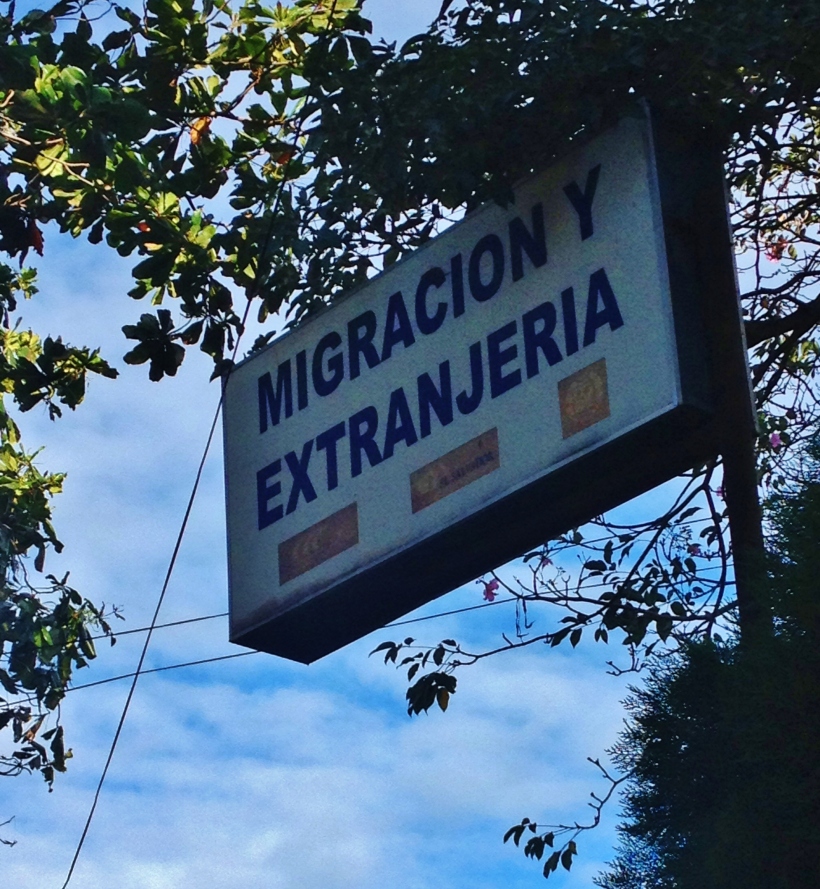 Bright and early we find the migration office at the port attached to the police station (the local ‘bobby’ we asked didn’t know it existed by the way) where we met our man Mario, who got us stamped out of El Salvador and then led us to the ‘waters-edge’.  There was no water…the tide was out, but as we pondered the fate of our footwear, a huge man showed up pulling a cart and instructed us all to climb aboard so he could pull us through the sludge-filled water towards our boat.  My aversion to being carted around like a prince was put to one side as I realised that this was how this guy makes his living, so we obliged…weird!

Being carted to the lancha through the shallows – Odd

The Golfo de Fonseca is a body of water that is partially claimed by El Salvador, Honduras and Nicaragua, which has been responsible for many disagreements between these friendly neighbours in the past.  The gulf is dotted with a variety of volcanic islands, some larger than others, but all captivatingly beautiful.  One of the islands is rumoured to be where Sir Frances Drake buried some gold and another (I am told) has locals with blonde hair and blue eyes who are descendants of pirates who used to sail these waters. We zip through these waters for 2 hours and before we know it, we are wading through the shallows onto Nicaraguan soil.

We get stamped into the country in a small dirty building just up from the shore and then we pile into the back of a Jeep bound for León along with  passengers from another boat who came via Tortuga Verde.  I mention this place again, in the hope that it comes up in a google search about Ruta del Golfo.  We paid $100 each for the same service that cost a total of $55 for other passengers who were offered our same transport ride at a cut down price.  We also didn’t get our stop on an island as we paid for!  Pissed off, does not begin to describe it!

The bumpy road takes us back into civilization and into León in around 2.5 hours where we find lodgings at the tranquil Colibri Hostal.   To our surprise we find Will, Sarah and Holly from the beach staying there as well, so we head out with some others to some live salsa and several mojitos in at the Via Via which is filled with locals and backpackers alike.

Another country, another colonial city.  León is a fully functioning colonial city; much Like Santa Ana in El Salvador, except this has a larger expat community and more appealing vibe in general.  A history of rebellion runs through Nicaragua so we dive straight into the city to see what we can learn about the Sandinista (FSLN) movement at the Heroes and Martyrs gallery.  A small room, partially used as a diabetes clinic, houses boards filled with pictures of rebels who lost their lives for León during the fighting, many of which have the stories of how they gave their lives.

Mural for the 4 students who lost their lives in 1959 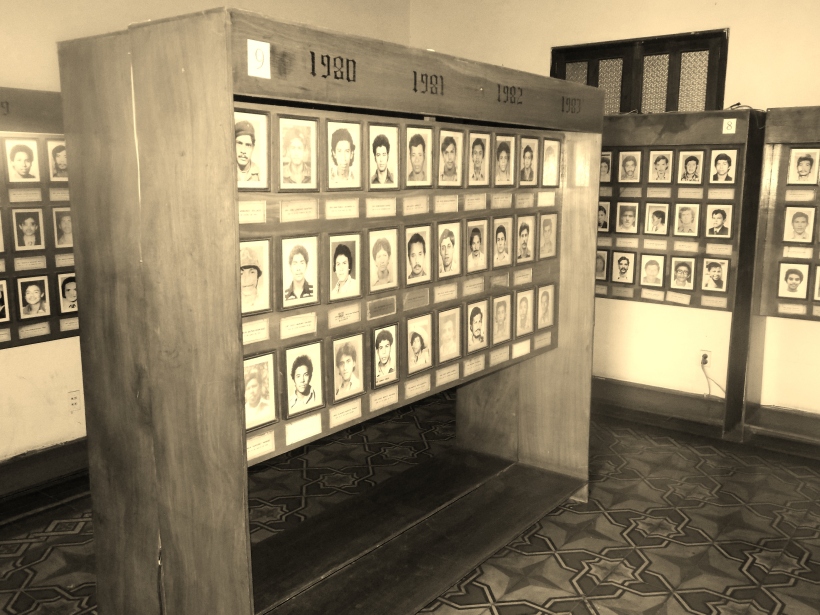 Gallery of Heroes and Martyrs

We then move onto the Parque Central and the UNESCO site of ‘Real e Insigne Basilica’ Cathedral which is the largest in Central America.  Its enormous dirty white façade casts a shadow in which locals sit and chat next to a memorial for the heroes and martyrs.  After this we decided we needed more culture so headed to Museo de Arte Fundación Ortiz-Guardián.  The cool air con and peaceful setting was just a cheeky bonus and sweet relief from the oppressive heat of the city streets.  The collection ranged from modern installations, religious portraits, a couple of Picasso sketches and a huge collection of modern Latin American paintings.  A belly full of culture was all we had digested so we sought out a French bakery for some sustenance. 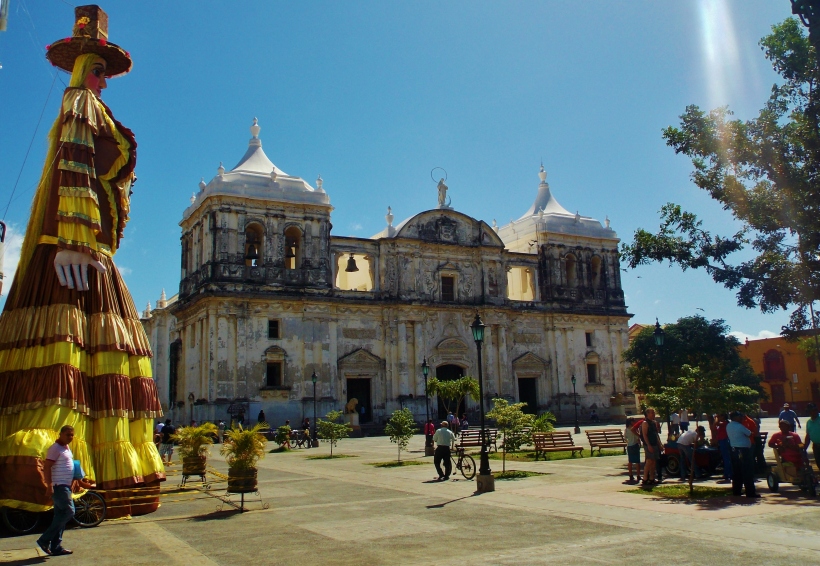 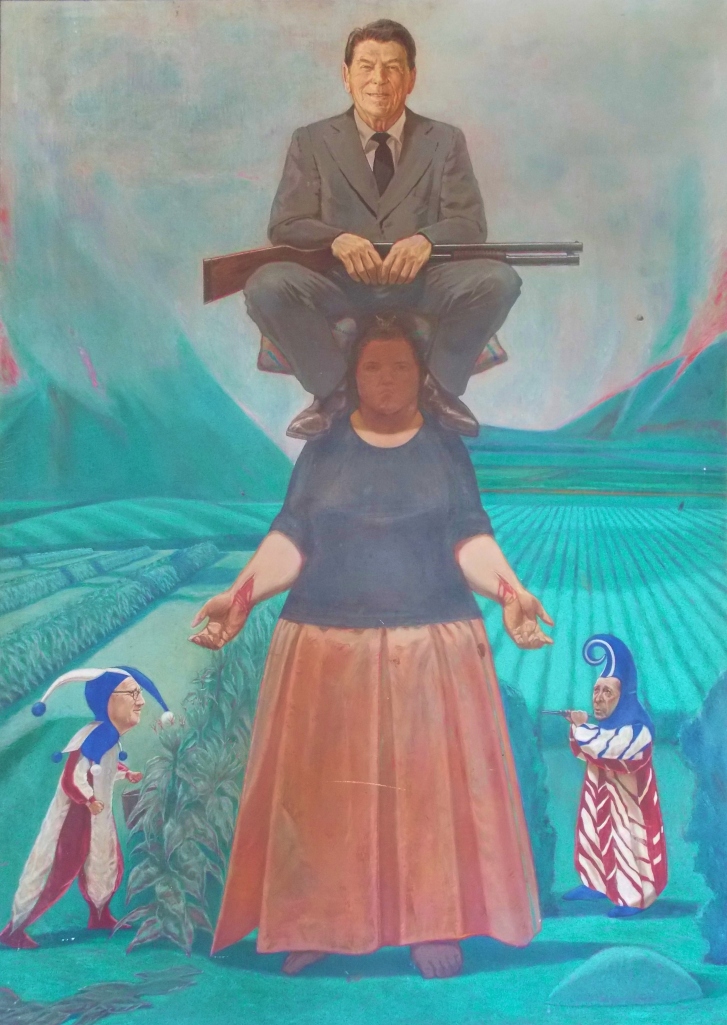 Titled ‘The Burden’ – 10 points to anyone who can tell us who the two jokers are. We all know whos getting a piggy back – Found in a little lace called ‘casa de culture’ 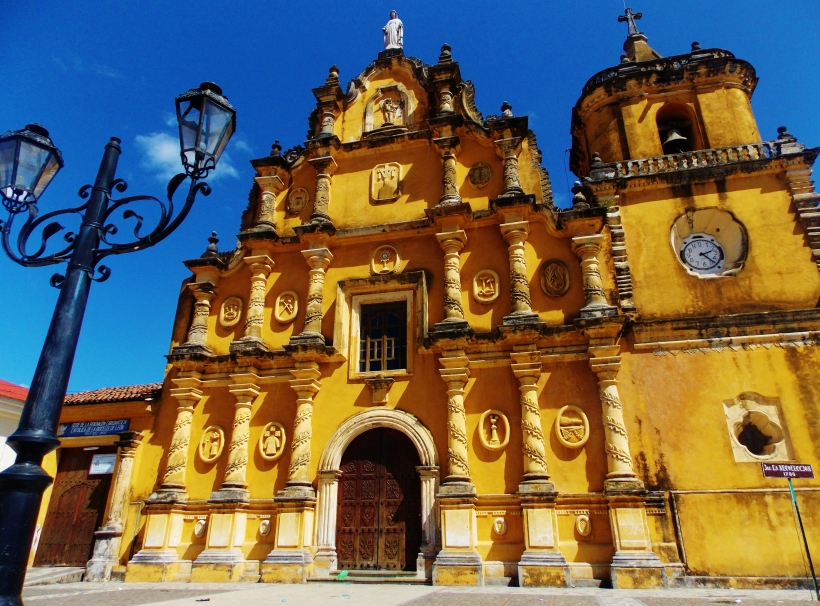 Some people don’t get on with this city, but I, someone who dislikes cities in general, found it homely.  I enjoy the juxtaposition of modern day life working around crumbling old churches that peek out above the cobbled red-roofed colouful buildings.  The local ways of life do not seem to have altered too much too accommodate tourism.  It’s a bit grubby, a bit hectic, but it feels safe.  I like it there! 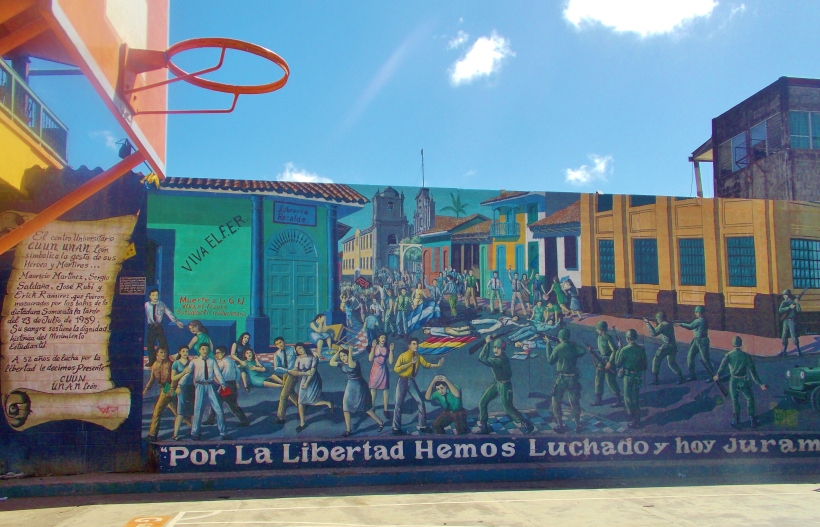 The next day, we head for the irritable little Volcano of Cerro Negro with the intention of chucking ourselves down it on speed on a piece of wood.  The volcano is the youngest in Central America, very active and is way overdue an eruption.    The sport of Volcano Boarding was invented by an Australian who tried to snowboard down it, but ended up melting his board. It is a dark, hot and steamy bastard.  A slow hike to the top took an hour when carrying large wooden boards and jumpsuits, but was relatively easy.  Going down takes about 45 seconds.  The record being 92kph, Ollie trounced us by getting 62 kph, with me falling behind at 53kph and Will with a gentleman’s 23kph.  I did fall off mine at the end and manage to fill my eyes with grit and smash my camera.  It hurt.  But only for a short while.  There were a few backpackers walking around town with very visible injuries that I assume are from activities on volcanoes.  An interesting day, topped off with our introduction to American Football and us losing $5 on the Superbowl.  Damn Seahawks! 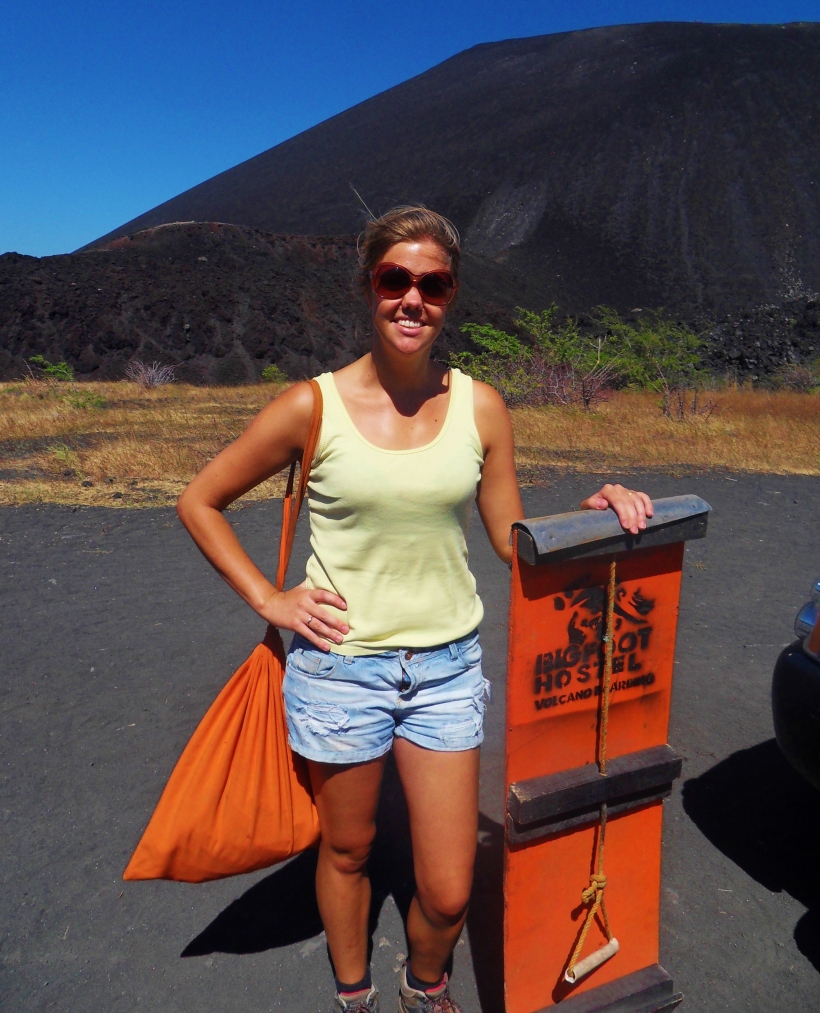 In case of eruption…erm, this way! 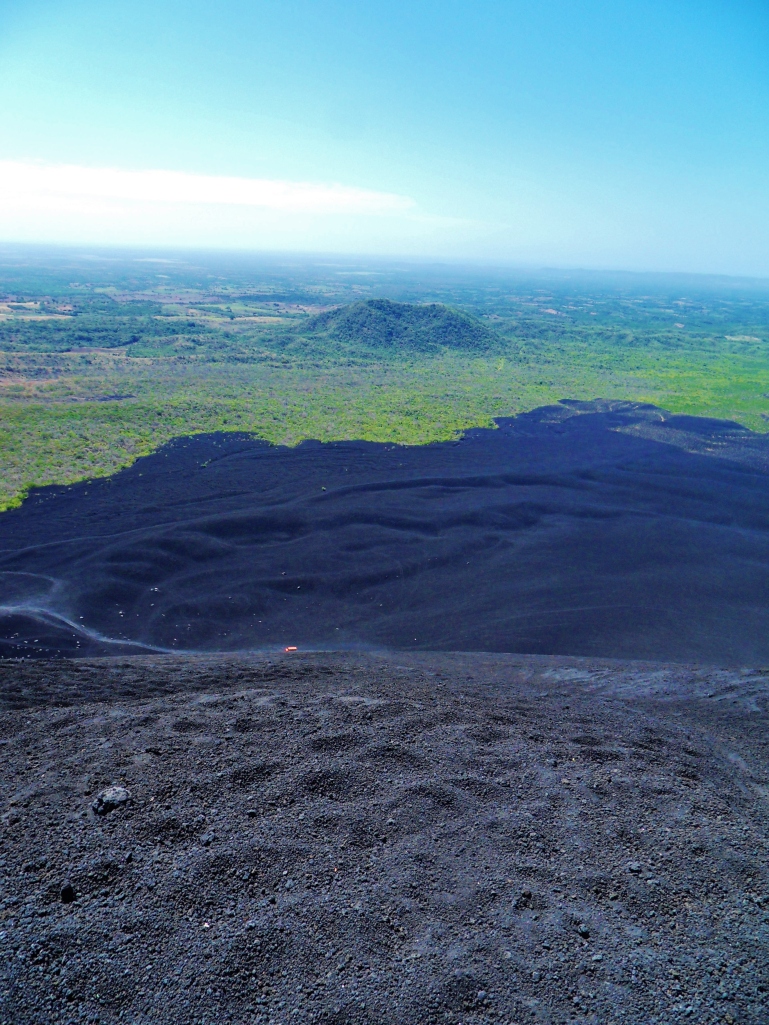 For some perspective as to how steep that is, the little orange dot at the bottom is the truck 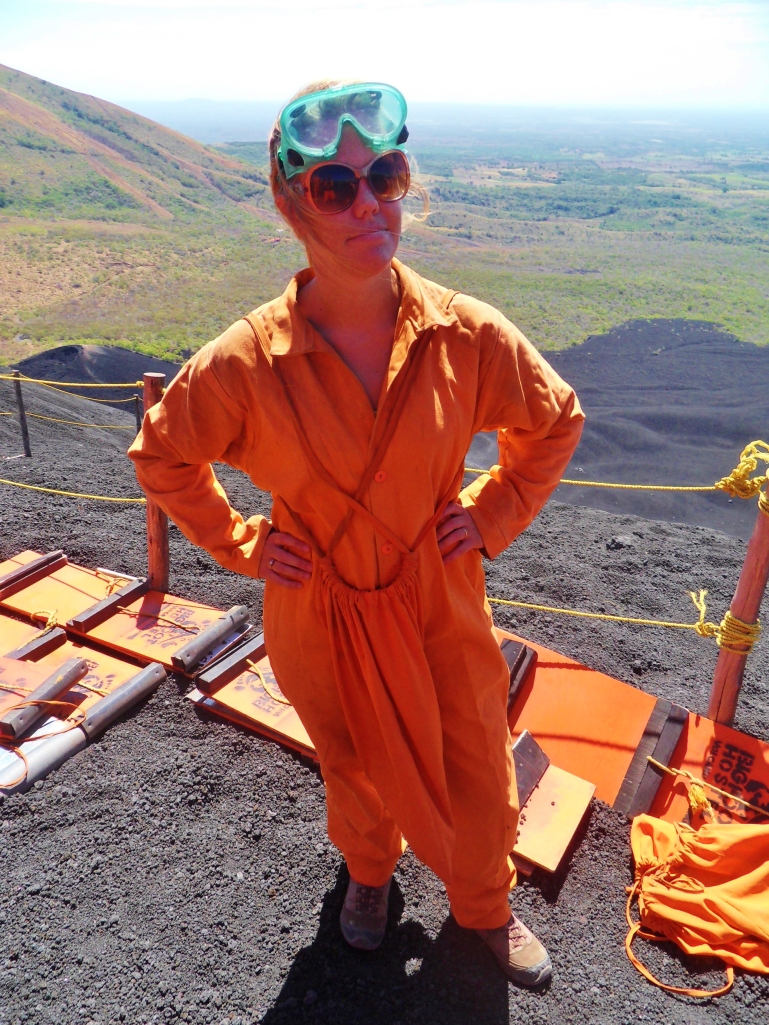 No pictures of our own as I smashed my camera. This one if from the bigfoot guide from that day. Borrowed from the FB page. Nice shot though!

It was time to make a move to Granada and see what all the fuss was about!  We were aware that it is the main tourism hub for Nicaragua, and being the oldest colonial city in the Americas dating back to 1524, would offer much in the way of architecture.   Two buses, changing at Managua, took us into the market area around the main Parque Central on a blazing hot afternoon. 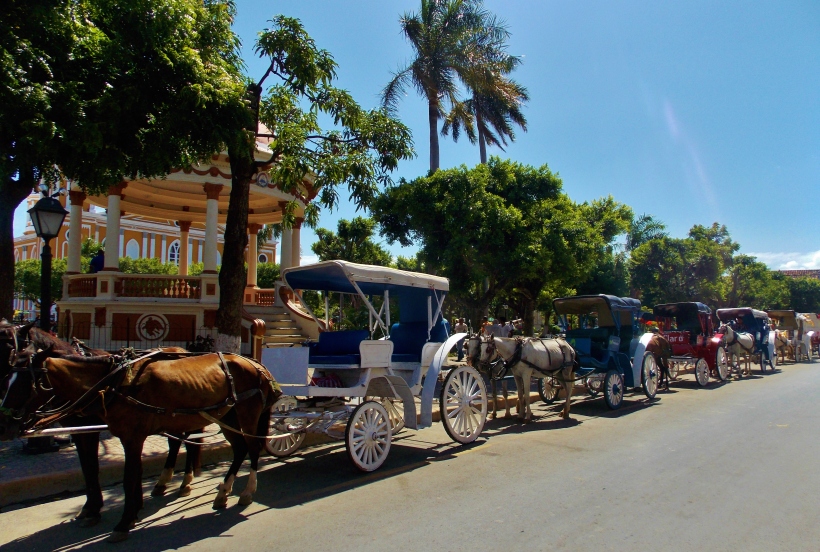 My personal opinion on Granada is that I don’t like it.  I just don’t, sorry.  It is indeed one of the more picturesque colonial cities.  Its buildings are magnificently restored around the Parque Central, leading to Calle la Calzada (gringo street), with its endless supply of expensive (for gypsies like us) restaurants leading past the TWO Irish bars down to the shores of Lake Nicaragua.  Milling around are hundreds of tourists, all snapping away at the fronts of the handsomely restored expensive restaurants and privately owned holiday homes.  It is just not my thing.  It’s pretty yes, but it’s too busy and too plastic.  Take it for what it is and you will enjoy it.  Come expecting a snap of rustic colonial charm, you won’t find much.  The local market two blocks from the square was a swift remedy for the hordes of tourists swarming through the main square.  But, like I have said, it was pretty, so here are some pretty pictures of it.

A goat, a bike, and a Canadian

Rubén Darío – And some other moody peops

Cordoba – The citys founder and the currencys namesake

Ok, it is actually quite nice

For all its faults, we met some great people there and had a couple of nice meals (yes we went to the Irish bars, you can’t really avoid it, but I did have fish and chips!).   One of the days we spent at Lake Apoyo which is a pretty crater lake near to the city, but again, this is set up for tourism where we found ourselves shuttled to a lake side hostel, and then shuttled back.  Pretty scenery, but not much wiggle room to explore in the time given.

Feeling the need to escape, we decided to head over Lake Nicaragua to the shores of Isla de Ometepe in search of a quiet spot.

Thanks for reading if you have managed to wade through it!  If you ant the full photo gallery, click here

2 thoughts on “Crossing through the Golfo de Fonseca to Nicaragua, the gritty beauty of Leon and the tiresome gringo streets of Granada.”