“I’m pretty sure all we need is a couple of days there, you know, just to say that we have seen the legendary coast of El Salvador.  Honestly, I don’t think it can be that great, I mean, we don’t even surf right?  That is roughly what I said to Ols when we decided to head for Playa El Zonte on the western shores of El Salvador.

We left Juayua early and took part in a bus epic through the capital city of San Salvador, not surprisingly, the journey was long and there were four buses. I’m not going to talk about it.   For anyone who wants to bus from Juayua to the coast, it can be done very easily by taking the #249 to Sonsonate and another bus (I forget the number, but your hostal can tell you) direct to Zonte, all the way along to La Libertad. Note, the bus only goes once a day at around 3pm from Sonsonate.  We chose the hard way as we had a tedious errand to run.

Finally we got dropped off to at the side of a random road, and walked down a dirt track without signs in the faith that it was in the direction of the sea.  Soon, we were on one of the most impressive stretches of beach I have ever seen.  To our left lay a lagoon framed with palm trees and rickety looking shacks and to our right an expansive windswept beach that was pretty much empty.  We had obviously come the wrong way, but we were on a beach, so we kept walking, the wrong way, with packs, along the sea front until we find out we have to cross the lagoon to get to our desired lodgings.  We wade through and find ‘the town’ and the hostal of Esencia Nativa, along with a couple of well-earned and frosty cold Pilsners.

Arriving at the beach…boots n’ all

“I know a great place for sunset, follow me!” An invitation from another guest that we decline by telling her we want to check out ‘the town’.  She knowingly smirked and tottered off along down the beach.  After 2 minutes, we had seen the town of El Zonte, which consists of three small comedors, two shops well stocked in crisps, smokes and water, and a couple of hostals.  We decided to find the sunset straight away at Olas Permanentes along the front.  Wow… 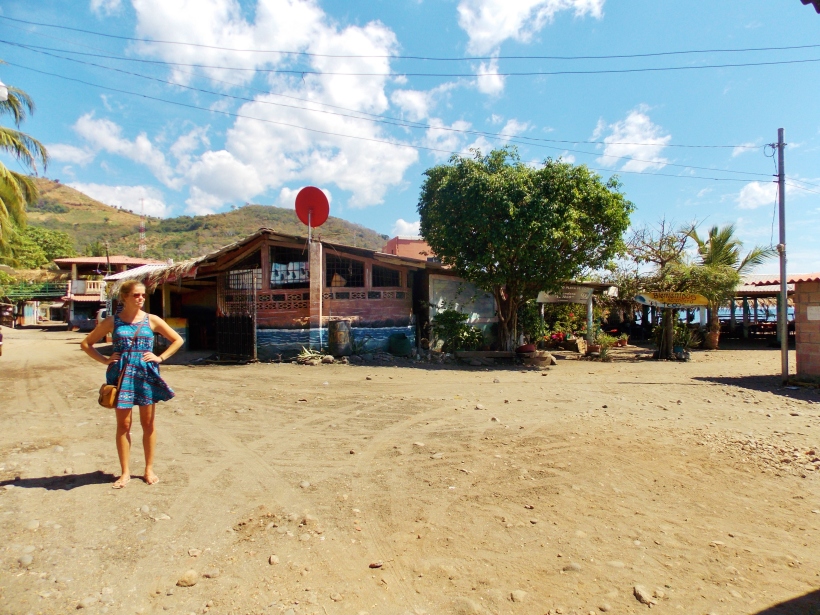 Checking out the town 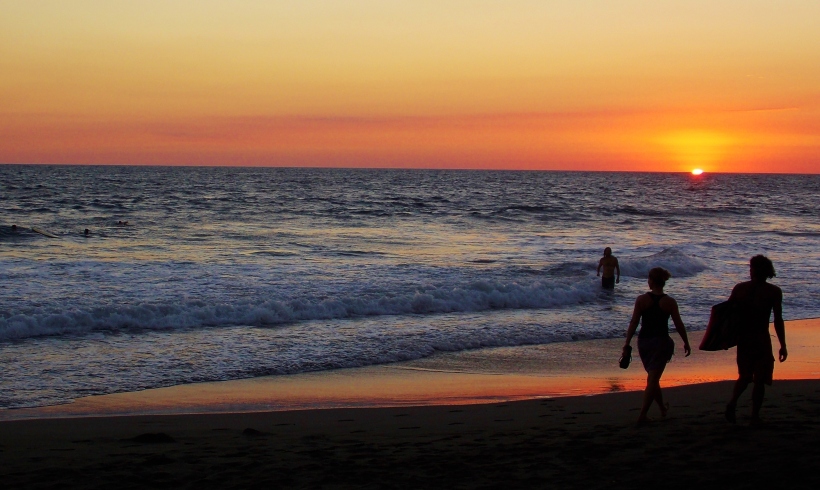 We returned in the dark, to find Rob and Will who we met briefly in Tacuba, who had also just arrived.  After a few beers and some damn fine pizza at the hostal we made a plan to go and surf in the morning.  They had surfed more than I had.  I have never surfed.  They had a couple of experiences between them, and some confidence everything will be ok.  Teco, the local longboard legend rented us some boards the next morning and we headed into the surf.  Let’s just say I have a new found respect for surfers. I was awful and came away with many cuts and scrapes from stupidly spending most of my time in the rocky area.  Board rash is an evil thing!   Ollie gave it a good go in the evening, but had a similar experience to me.  Good fun, and we did the same the day after, but we conceded our surfing careers would end there for a while. Like looking at volcanos rather than summiting them, watching surfers is much more entertaining than giving it a go yourself. 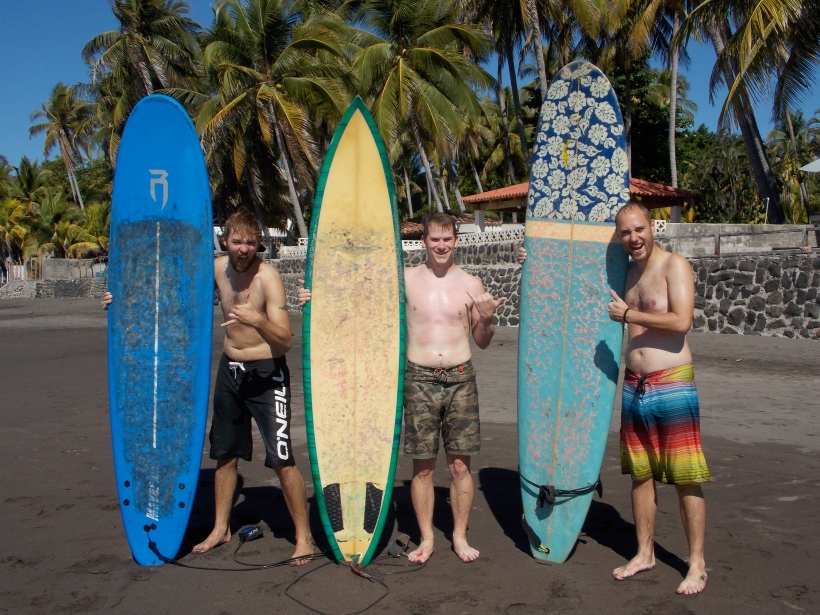 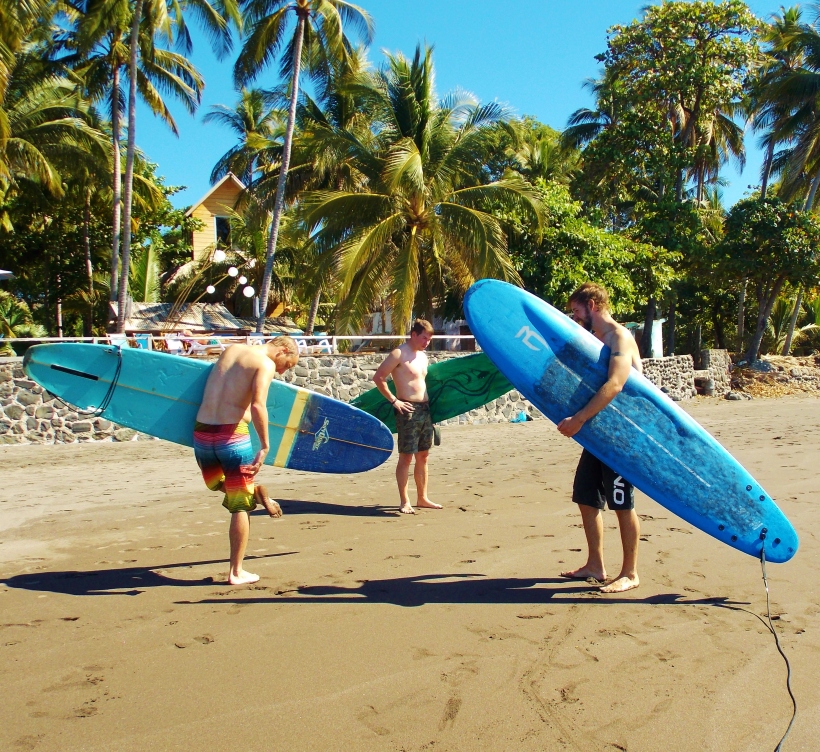 Checking out the damage 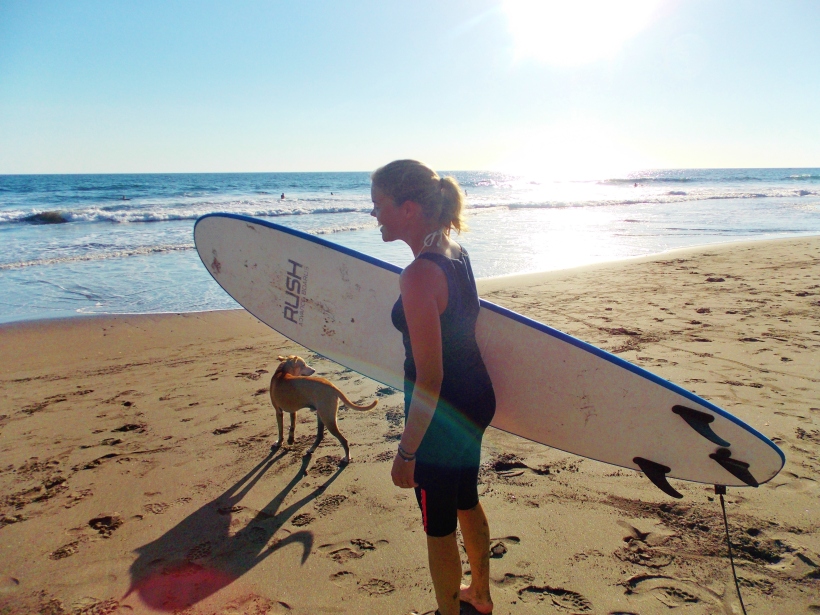 Ollie showing us how its not done

Two days effortlessly turned into five and then melted away to ten.  The guys are good people (even though Rob is from Sidcup) and we spent plenty of time collectively doing not much apart from ping-pong, cards, frisbee and drinking.  Serious surfers Josh and Michelle joined us when they were not ripping it up out in the surf.  It became an easy routine.  Breakfast at Teco’s for $3 each while we watched the surfers was almost compulsory on a daily basis.  Beers at the sunset bar was a given.  Bottles of Flor de Caña rum were imbibed alarmingly rapidly between us over pizza some nights that resulted in ill-advised acrobatics and questionable dance moves.  Joined by some more fellow Brits, Sarah and Glen, we had some great nights.

This is what rum makes you do 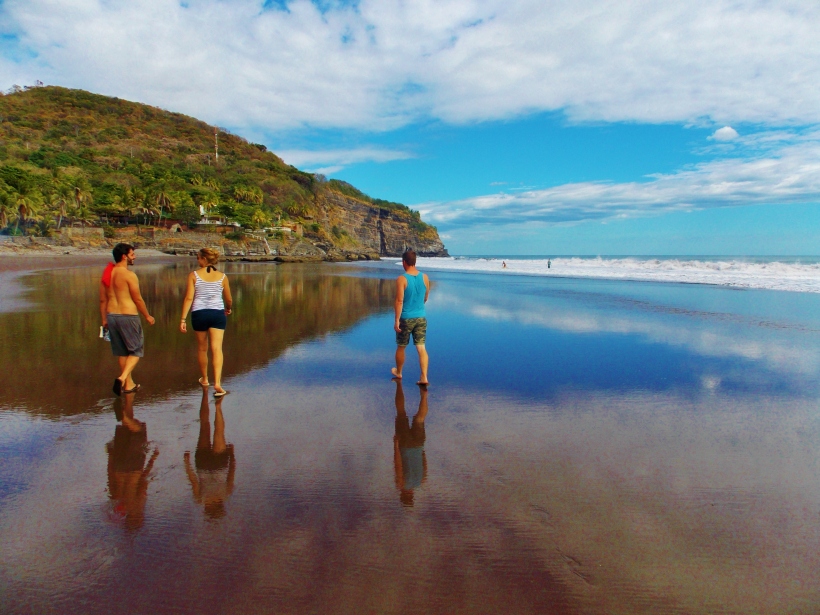 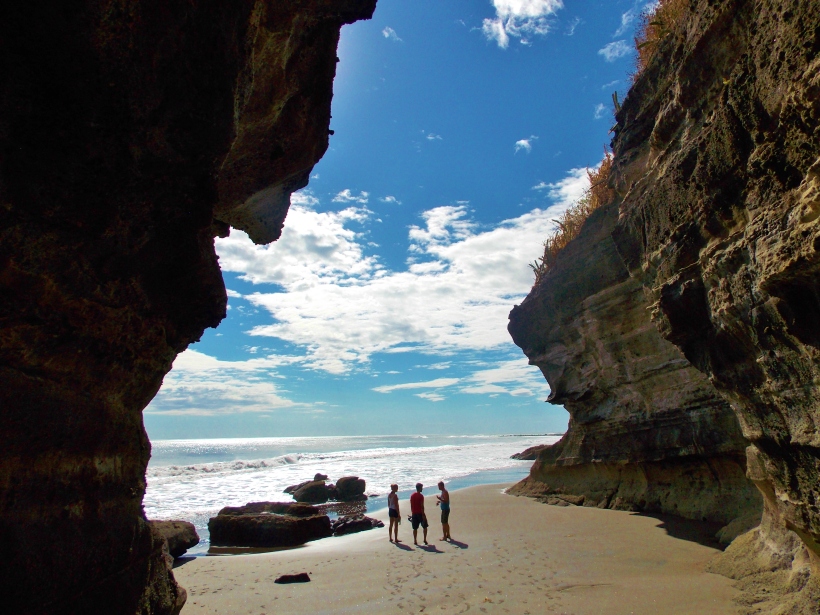 Looking out from the cave 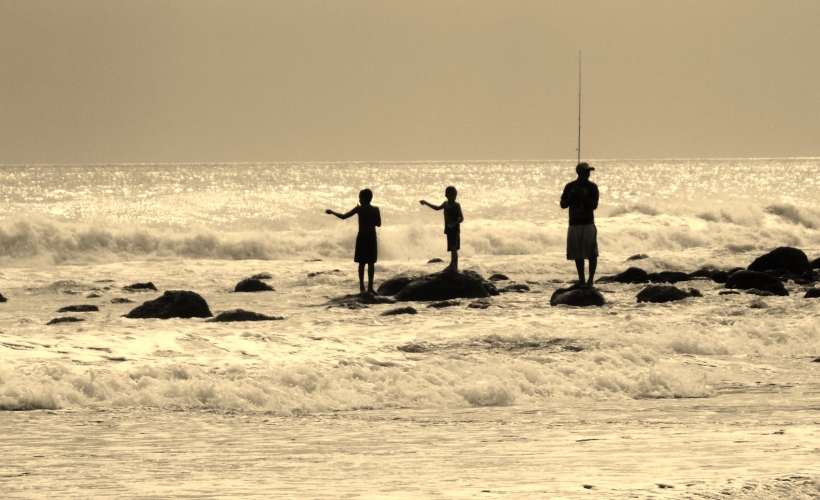 The need for cash took us to the ‘party town’ of El Tunco one day, where many travelers stay a while and learn to surf in the day and drink hard by night.  We had to leave by 6pm (which was unfortunately when the craft beer house opened its doors) as the last bus back along the front ran at that time.  Chicken buses are named so because people pack onto them like battery farm chickens.  There is also a strong possibility that you will be taking your journey along with some actual chickens (twice so far for us).  This bus offered both, and we had to squeeze on at the front, where some were hanging out the door and I nearly in the drivers lap. 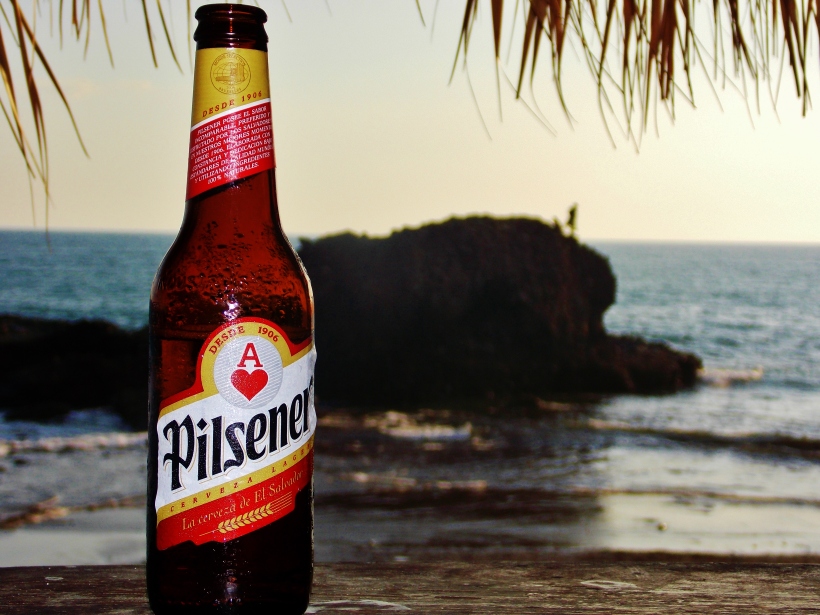 The Tunco rock…could be a beer advert really!

On recommendation we headed west to the end of the beach and up a dark pathway then onto the coastal road for five minutes until we came found a great little restaurant run by Aldo and his wife.  There is no name yet, but ‘Cuidemos El Agua’ is painted on the front.  Lobster was on offer at $10 a throw as well as the fishy option of ‘Sopa de Mariscada’ which had so much fishy goodness in it, it was overflowing.  Aldo has only just opened and they serve up some fine cuisine (the same fare as where his wife works at a fancy hotel up the road, but for cut down prices) along with welcoming service.  Not having a name for the place yet, he is debating whether to call it ‘Carisa Café’ after his daughter or ‘Tube Café’ after his love for surfing.  Aldo is soon to be offering accommodation and also runs some tours.  He is top bloke and passionate about his business.  On our second visit and last meal in Zonte he arranged for a cake to be taxied in from La Libertad for the birthday girl at Will’s request.  Support this guy’s business if you go there.  Make the effort.  It’s worth it just for the nighttime walk along the beach back to your lodgings while you dodge crabs and waves under the stars. 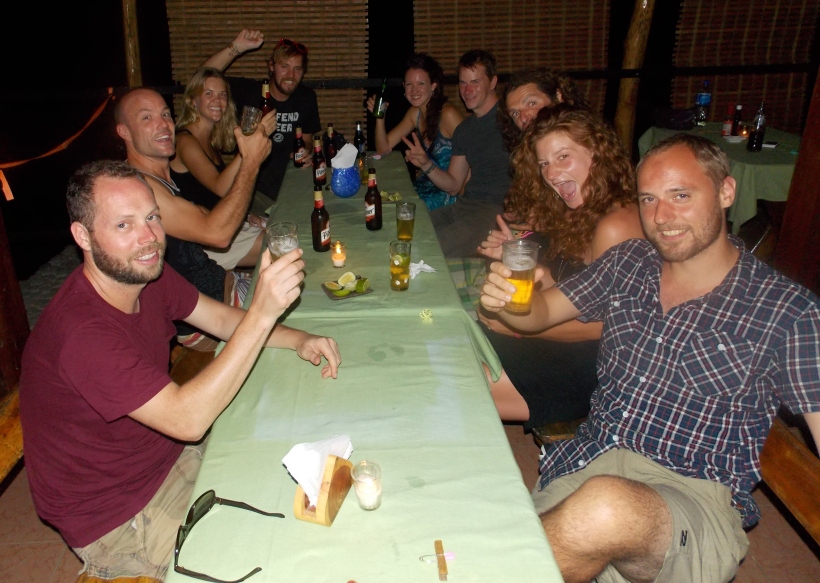 We are not ‘beach people’, but we found it hard to leave.  You could spend months along this stretch of coastline and not get a lot else done.  Ollie partook in the surfer geared yoga some days while I got to know some hammocks better.  One day, spotting whales breaching the surface just past the surf was a special moment that I won’t forget soon. 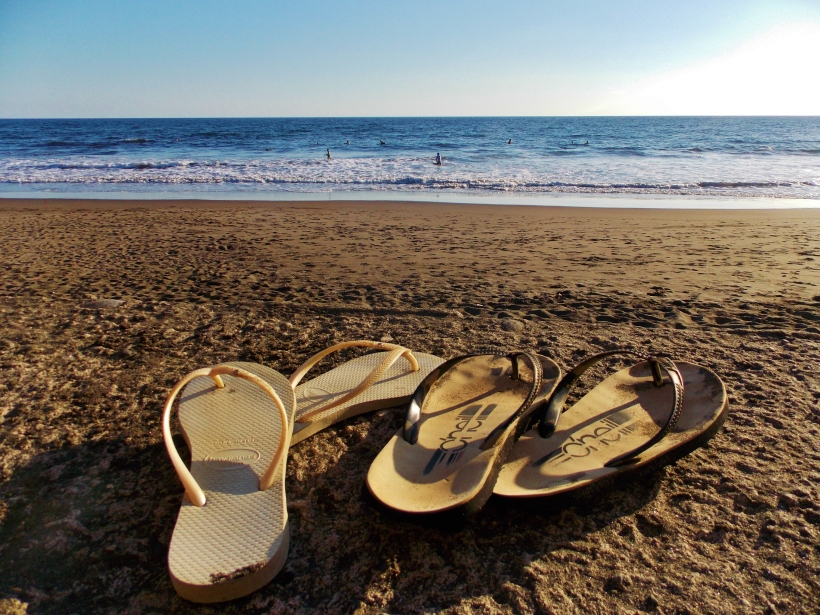 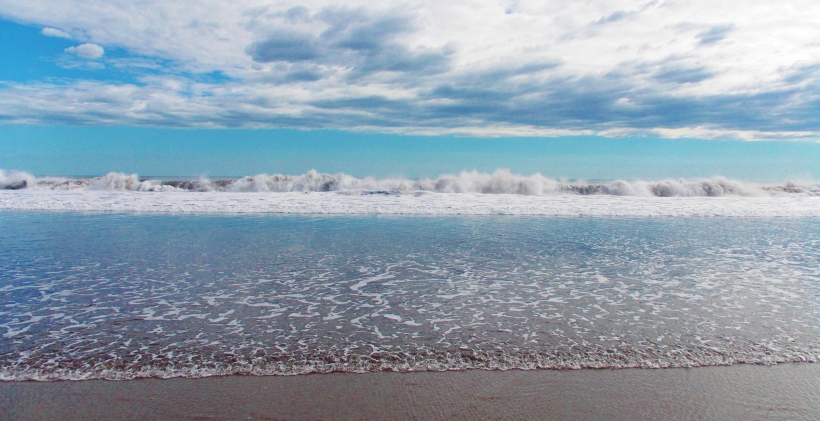 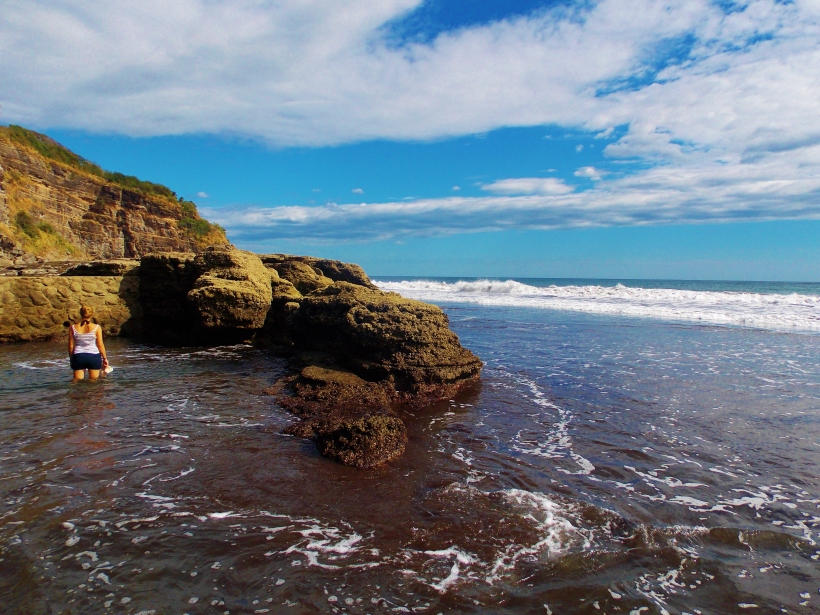 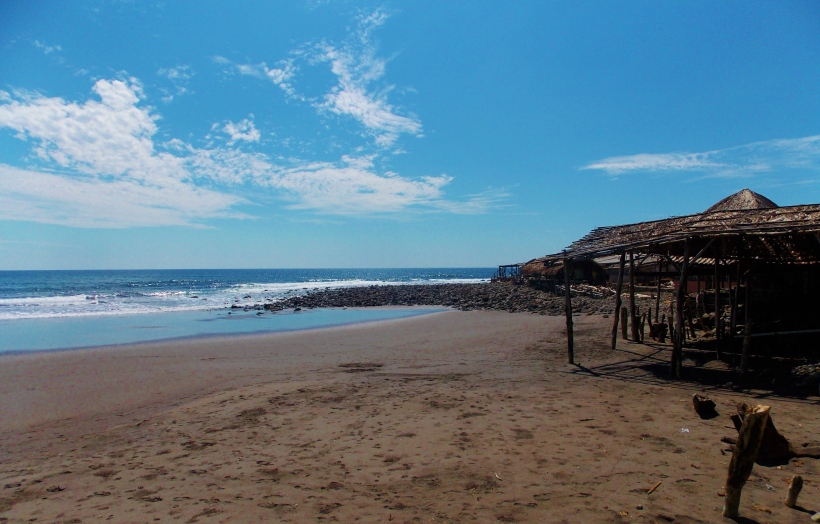 So, take heed of this warning.  El Zonte is not conducive to a productive travel experience!  Luckily (or unluckily as we felt) we had a boat booked to Nicaragua, so had to leave….

Thanks for reading.For the full photo gallery, click here

70 thoughts on “Playa El Zonte – A warning to all travellers!”