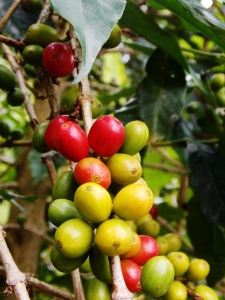 If you don’t know already, Colombia has two main exports. Two plants. One has a notorious history, resulting in incredible wealth, murders, combat, foreign intervention, worldwide drug dependency of epic proportions and general cartel activities famous the world over. The other is just famous for giving everyone that much needed kick start in the morning. I’m gonna talk about the latter one as of course Salento is in Colombia’s Zona Cafetera. I would like to start by saying that this is not the first blog to be written about Salento and certainly will not be the last. In fact, I have seen more blog posts about this area than any other on our travels, so it will be a brief one, mainly with some picture galleries.

Colombia is currently (at the time of writing) the world’s fourth largest coffee producer and exporter. Salento is in the heart of this area and has become popular with foreign and Colombian tourists alike. Before arriving in Salento, I was worried about two things. Firstly that it wouldn’t be as beautiful as everyone says, and secondly that it would be packed full of tourists and ‘gap year students’. Turns out I was right to worry about one and not the other.

Still travelling with Paul and Catrin we arrived in Salento in the evening and wandered up to the doors of Plantation House, where we found lodgings for $25 a night for private room. A really nice little spot, recommended.  We then went out for a bite to eat and discovered just how touristy this town is. Put it this way, I had a chicken madras curry, which I haven’t seen anywhere since leaving the UK. It was good as well, even had naan bread. They were not the only restaurant serving it either. This may help me explain just how touristy this town is.

So it turns out my second worry was founded, but my first was not. It really is as beautiful as people say, but you just have to put up with young Jemima and Tarquin banging on about Machu Picchu whilst listening to Manu Chao or Bob Marley on repeat. (Breathe Rich, breathe!) The town itself is a pretty little brightly-coloured drop in the sea of green that surrounds it. Each house and shop is painted a different colour to its neighbor, sprawling out from a main square and church in the centre of town. There are three main things we enjoyed whilst there (four if you count drinking rum) which were: hiking around the giant wax palms of the Valle de Cocora, touring a local coffee finca and throwing metal at gunpowder whilst drinking beer in the name of entertainment – the Colombian game of tejo. 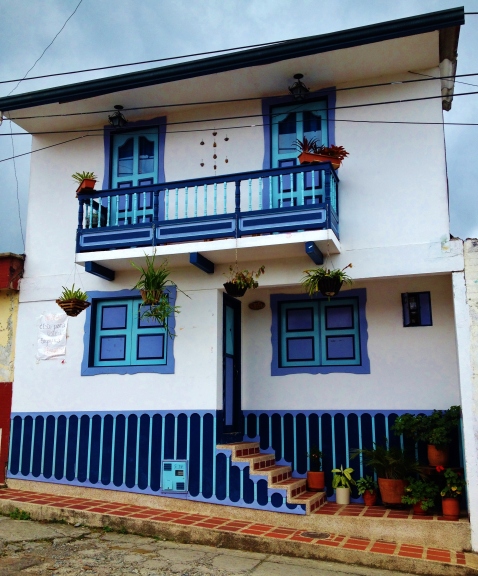 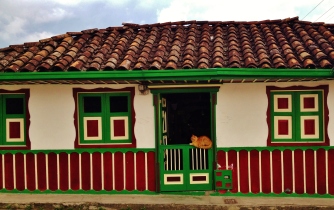 A ginger tom eyes up the passing gringo’s

Even street furniture is fun here

The main touristy street in Salento

Steps to the lookout point, in Salento

A frosty bottle of BBC 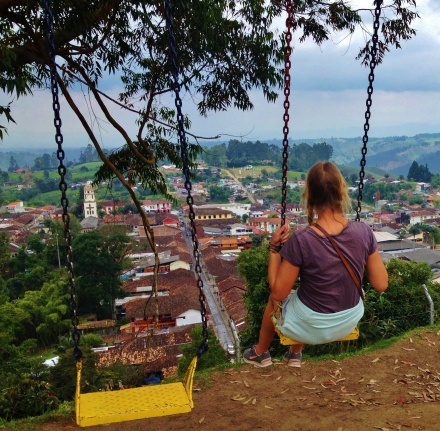 Firstly, the Valle de Cocora, was one of those things that I really wanted to do when planning this trip. On bad days at work saving for this trip I used to send Ollie pictures of sights we would be hoping to see and when I stumbled upon the Valle de Cocora, I knew we had to get there at some point. So, I was pretty excited when we hopped on board the back of one of the brightly painted 1950’s USA Willys jeeps that drove us the 14km to the entrance to the park.

The hike takes you through the bottom of the valley where you see the tops of the hills dotted with the giant Quindio wax palms (Colombia’s national tree and one of the tallest trees in the world), then the track leads through a lush sub-tropical forest with a selection of fun and rickety bridges before entering the upper part of the trail, through a clouded pine forest to a small farm at about 2800m. The route then leads downhill, back towards the valley where you climb down through the thick clouds (very thick, far too thick for my liking on that particular day) and to the valley floor, where we marveled at these amazing trees. I could use some kind of tortured metaphor to describe them, but I will just hope you can be happy with my description of ‘really really really tall palm trees that look like they shouldn’t be there in a hauntingly beautiful way.’ I found it a wonderful place to sit and let my mind wander. 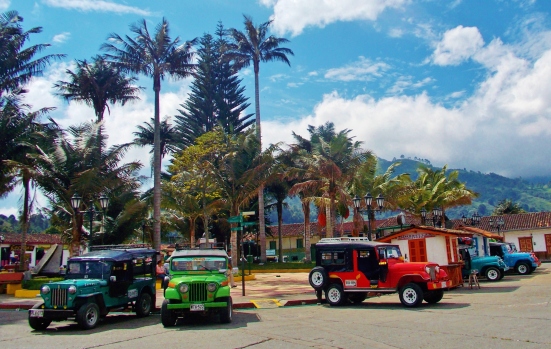 Willy’s jeeps – Transport from the main square to Cocora 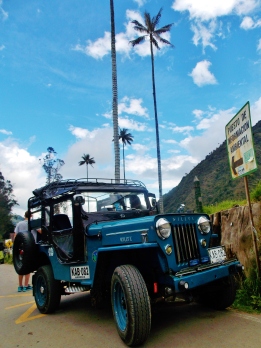 A Jeep at the park 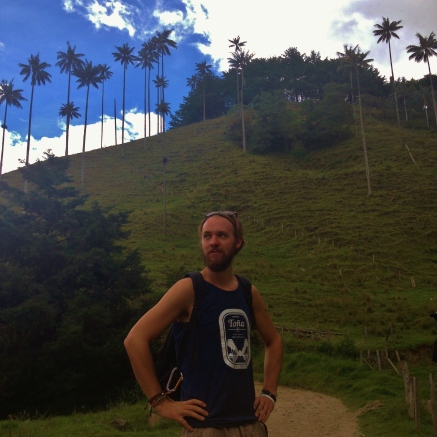 This wasn’t a pose – I promise

Cloudy day for it 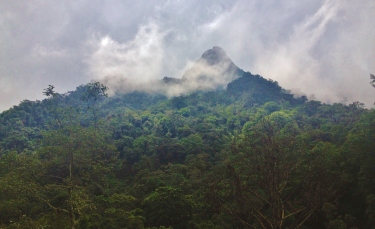 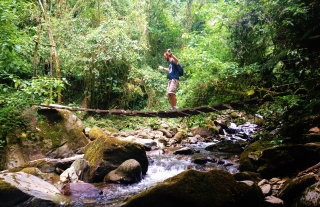 Always fun when there is a treacherous bridge involved

Top of the Hike – Easy stuff! 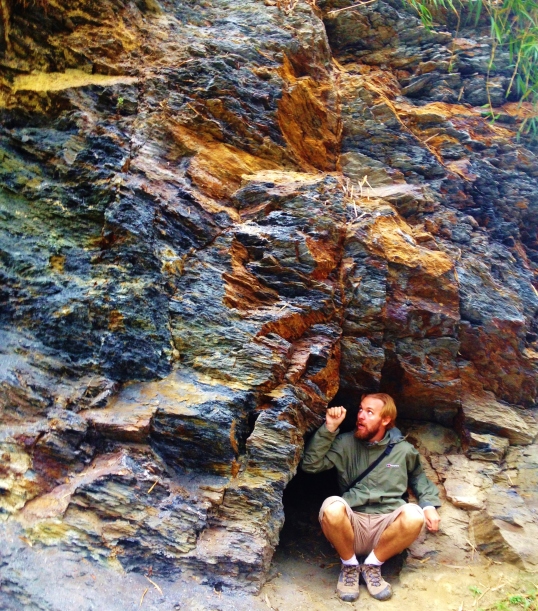 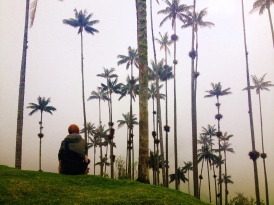 Again, didn’t pose for this one!

A bit of perspective – That’s me on the bottom left

Then there is the coffee. We stayed at Plantation House as previously mentioned and they have their very own coffee farm next door, with a free tour offered to guests who stay for four nights like we did. I have previously written about coffee in great detail when we visited Juayua in El Salvador, but this was a great opportunity to find out about production on a smaller and more rustic scale. Don Eduardo (AKA Tim) took us on a guided tour of his finca, from its acquisition, composition of different types of coffee plant on the site, history of Colombian coffee in general , his ongoing dispute with the neighbor and his plans for future domination of the Colombian coffee market. 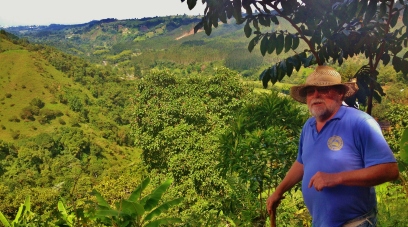 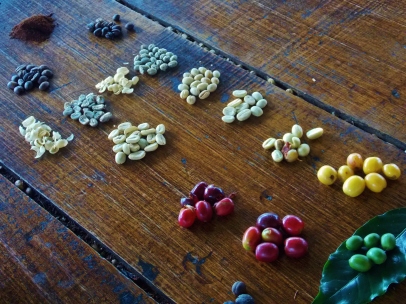 Short hike around the Finca

Very interesting facts learned. Did you know that only 14kg of sellable coffee comes out of 100kg of freshly picked beans after washing and drying? Think about the fact that each bean is handpicked and about the size of a garden pea, that is how hard these guys work. This man is a wealth of knowledge and passionate about his coffee. He’s also got a pretty nice slice of land there with a small bamboo forest you can walk through in amongst the coffee plants.  The tour also includes the chance to watch some coffee being roasted and then drink as much as you can.

Drying the beans in the sun

Roasting the beans on a stove

Enjoying a fine cup with a pooch

Then there is ‘tejo’ (pronounced teh-ho), which is the second most popular game in the country (I was surprised to find out). Explained in a nutshell, you throw a metal disk onto a packet of gunpower that rests on a ring of metal, in a bed of clay in the hope of a direct hit and explosion. You get more points for accuracy and explosions. The first team to 27 wins. It is traditionally drunk with copious amounts of beer and there are a couple of places in Salento that cater for the Gringos to have a punt. Not wanting to break from tradition we managed to see of a fair few cervezas and managed a few explosions to boot. When you’re not playing tejo in Salento, the sounds of exploding gunpowder and drunken cheering can be heard across the evening sky. Los Amigos bar gives you the opportunity to play in real rustic surroundings, and well as the opportunity to play another local game called ‘sapo’, which is similar, except you throw small metal disks into holes and aim to hit small packets of gunpowder on the mouths of metal frogs. I’m not making this up. It’s true. I wasn’t that drunk. 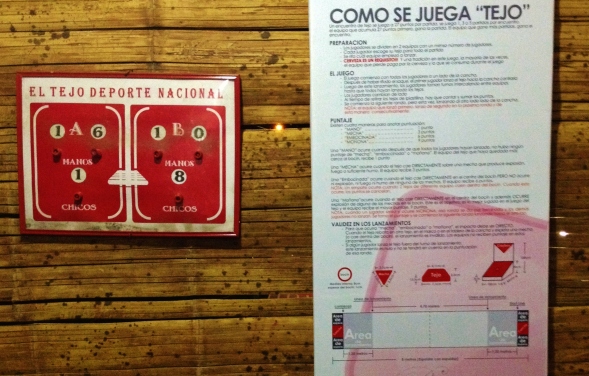 The rules of Tejo – blow shit up!! 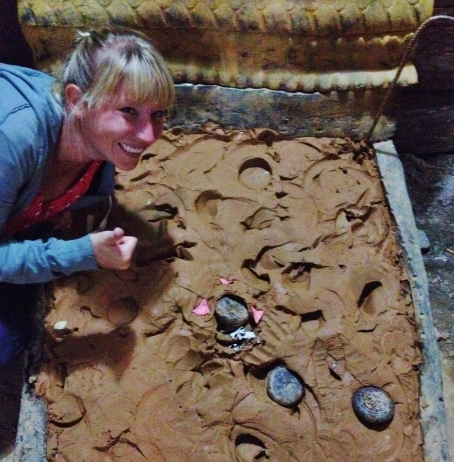 Catrin smacking it with a Monono – or an explosive bulls-eye. 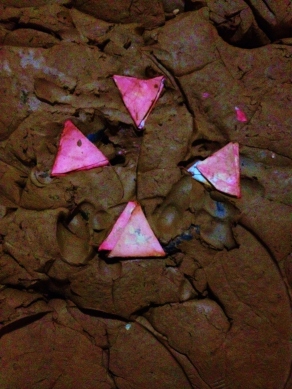 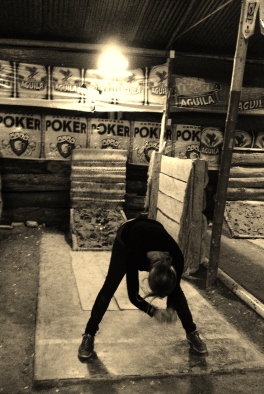 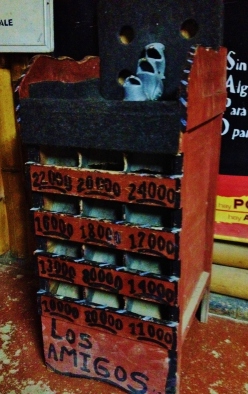 Sapo -Chuck the rings at the explosive stuff on the frogs mouths – See i wasn’t making it up.

So Salento is indeed a wonderful place and as such is a big stop on the gringo trail of Colombia. It will only grow in popularity over the coming years and become less special. Also, apparently, the current way the giant wax palms grow is unsustainable as the cattle that graze there eat all of the saplings, so you had better get there quick if you want see those really really really tall trees! You won’t regret it.

4 thoughts on “Salento – Welcome to the land of coffee, giant palm trees and Tejo”