After our whistlestop tour of Bogota it was time for our tenth and final country in the Americas…. Brazil! We’d initially had grand plans to sail down the Amazon and travel down the Atlantic coastline before realizing that: A) After two months of slacking in Colombia time was running out, and B) Brazil is big. Seriously big. So as our flight back to Europe was out of Salvador da Bahia we decided to focus the 11 nights remaining on seeing the city and finding a fairly local beach to sample some of Brazil’s (justifiably) renowned beach life. 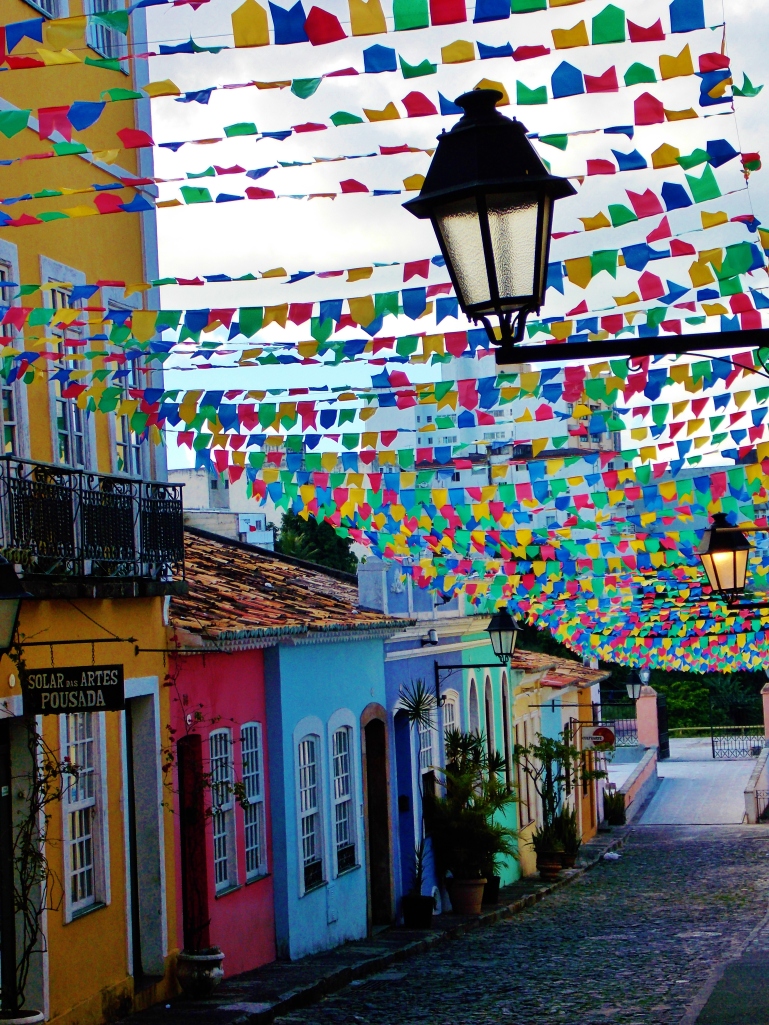 Colourful streets of the Pelourinho

We eventually landed in Salvador on a Tuesday morning after a lousy overnight flight from Bogota with a stressful connection in São Paolo. The first main challenge was trying to adjust my sleep-deprived brain from the Spanish to which it had become accustomed, and was reasonably competent in, to Brazilian Portuguese. This did not go as well as I had hoped – after enquiring as to the price of a taxi into the old town, and hearing a very reasonable “18 reais”, we arrived at our destination and found out that it was actually “118 reais” A minor linguistic difference but a fairly hefty one on the wallet. I was so tired I almost cried but decided to write it off as a sharp lesson in not being afraid to ask someone to repeat something! Speaking of the language, despite studying a little Portuguese (although not the Brazilian variety) 8 years before and being able to decipher most things in writing, understanding conversation is another matter. Rich’s assertion that it “sounds like Dothraki” wasn’t too far from the truth to our untrained ears. In fairness it has more beauty than that comment would imply but it’s certainly worth learning some before you go – English is rarely spoken and Spanish in a Dutch accent doesn’t really cut the mustard… 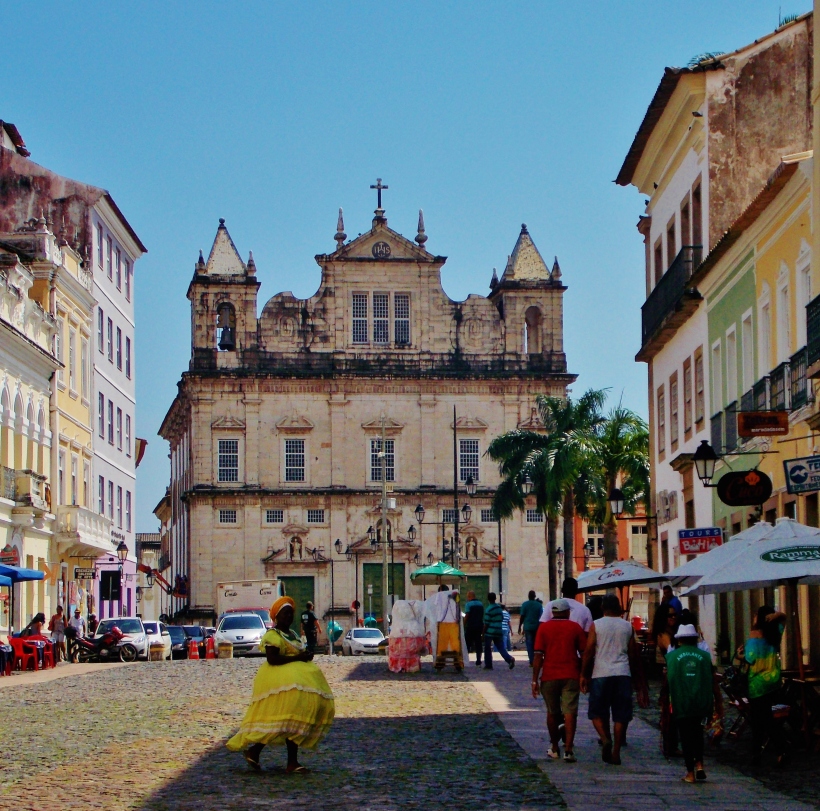 Driving into the city we sped past the recently renovated Arena de Fonte Nova, all shiny and ready for the World Cup (which is well underway as I post this blog but was a couple of weeks away while we were there). The city has a number of other ongoing construction projects (in varying states of readiness!) but we did get the impression that a lot of money has been put in by the government which, ready in time or not, should benefit Brazilians and ongoing tourism in general.

Arriving in the old colonial district of Salvador, known as the Pelorinho, is certainly an assault on the senses. Visually it’s stunning. Colourful and utterly beautiful. But the main assault is on the ears. Our hostel (Laranjeiras) was conveniently located between two carnival drumming schools, one of which is the famous Olodum, who performed in a Michael Jackson video and at the World Cup opening ceremony. They know how to make some noise. Deciding that a peaceful evening in was out of the question we wandered around the cobbled streets then settled in for the first of just a few caipirinhas in our time in Brazil. Those drinks wallop you fairly quickly so I ordered some much-needed hearty dinner of moqueca de camarão (a stew made with prawns, coconut milk, dendê oil and spices, served with rice and black-eyed beans). Our Brazilian education continued that evening, lesson two being: two caipirinhas is enough. A third is a silly idea.

Wish bracelets tied to the outside of a church 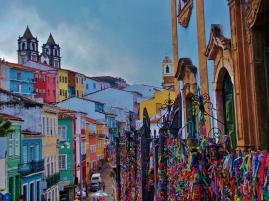 This cost 3 quid…so best put it in.

Square in the center of the Pelourinho 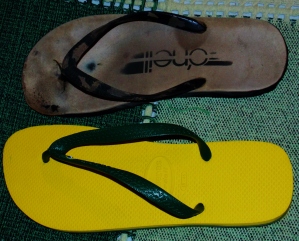 Rude not to upgrade! 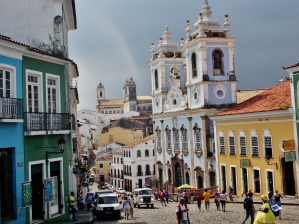 Before I talk about sightseeing, it’s worth mentioning what we’d heard about safety in Brazil before arriving there. When people say a place is ‘dangerous’ I always take this with a large pinch of salt, as it has a lot to do with how you behave (i.e. wearing/carrying things that draw attention to you) and dumb luck. We’ve been to many supposedly dangerous places without incident and lived in London which isn’t exactly a protected bubble. That said, we’d heard several first-hand reports of muggings in Brazil as we traveled and what made us somehow more nervous was Brazilians themselves telling us to be careful on the streets of their own city. Hostel owners, the tourist police and restaurant owners would tell us not to go out at night or use a camera. It made us feel a little uneasy as the atmosphere, especially at night, did feel sketchy at times. However, we had no problem while there at all so this feeling may not have been justified. It seems perhaps that locals are aware of the reputation but want things to improve to bring more tourists in so encourage visitors to ‘not get mugged’. I’m not sure it has the desired effect, as it puts people a little on edge, but the intention is good I think.

Views over the lower area of Salvador (Cidade Baixa)

Palacio Rio Branco at the top of the giant lift 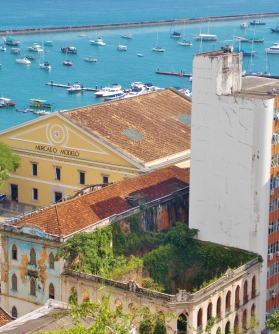 Cidade Baixa with ships on the horizon

So, back to sightseeing. The old city is split into two areas: the Cidade Alta and Cidade Baixa (‘Upper’ and ‘Lower’ cities). The two are connected by staircases and a bizarre-looking huge lift (Elevador Lacerda) that whizzes people from top to bottom for just a few cents. The Cidade Alta is probably the finest preserved collection of colonial buildings we’ve encountered and despite having seen a fair few colonial towns over the past months, I was still stunned by the hilly streets and plazas here. You get a fairly standard amount of tourist hassle here (such as paying for photos with the fabulously dressed Bahian ladies and Capoeiristas in the square) but it’s mostly pretty good natured. Still after a couple of nights in the centre we decided to migrate to the more peaceful beachside district of Barra to see a different side of the city. Unfortunately the hostel we had in mind was full so were left with little choice but the HI hostel Albergue do Porto (Don’t do it. FYI, Hostelling International, a decent breakfast doesn’t make up for paying through the nose for a room that smells of piss.) Keen to spend the evening out, we strolled along the seafront past the old lighthouse and feasted on a dinner of garlic and chilli prawns before a couple of sundowners watching the joggers, strollers and dog-walkers of Salvador. Barra is a much more relaxing spot than the centre (major construction work aside!) and it made a nice contrast to see these two sides of the city. 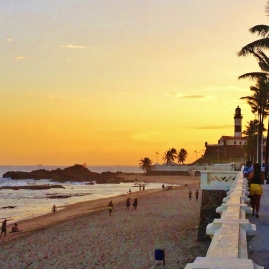 View along the Avenida Oceanica in Barra

But city life takes its toll, so the only thing to do next was head to the beach….

Canine Behavior & Training, Board and Train, Daycare, and Seminars