Semuc Champey from above

“We can’t go any further guys, the water is too strong and we may drown”.  This was a sentence I was not expecting to hear at any point in my future when we decided to go to Lanquin!

On a tight schedule now as we have a destination date for Christmas in Honduras, the next two stops in Guatemala are going to be rushed, however they are my most anticipated.  The first being the town of Lanquin, the gateway to Semuc Champey.  When researching our travels this is the attraction that excited me the most and I have been looking forward to it since we left the UK.  A cheeky 9.5 hour cramped mini bus ride (Q125 each, shop around in Antigua, some people paid Q180 on the same bus!) took us via Guatemala City and then through winding wet hills of The Verapaces; which consist of the Baja and Alta departments (lower and higher respectively).  The journey as usual is minging; packed in with 17 other souls including one infant child, it becomes tiresome quite quickly.  After a stop in Cobán the journey takes us to Lanquin through treacherous narrow passes in the pouring rain and we try to ignore the evidence of recent landslides on the roads. 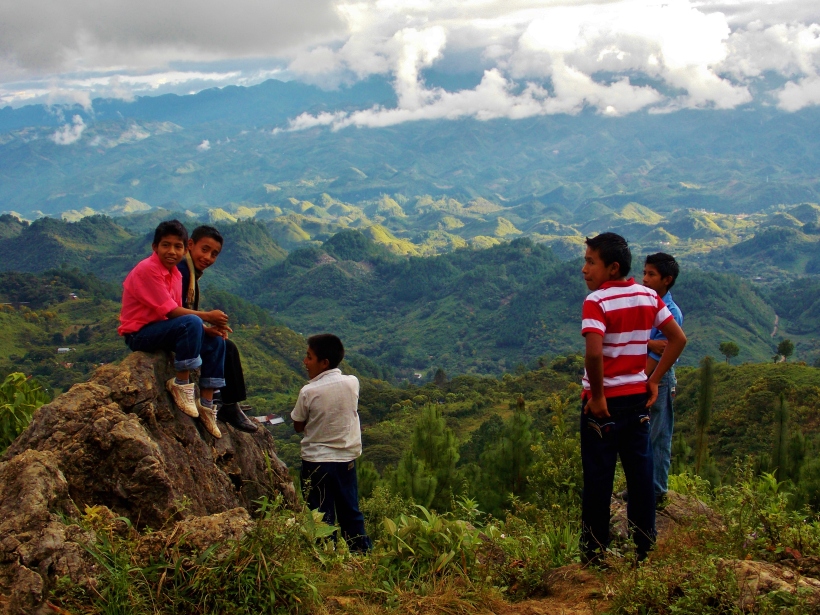 The Verapaces- How did these kids get here??

Semuc Champey, described locally by many Guatemalans as the ‘Eighth Natural Wonder of the World’ is a series of natural formed limestone pools that bridge the thundering Rio Cahabón in a smooth staircase-like fashion.

As always, for the snaps only and no waffle, click here!

We stayed at El Retiro Lodge (Q120 private room for two) which is set up for backpackers visiting Semuc, offering a tour to the site as well as a visit to the nearby Kan’ba Cave system (Tour cost Q180 per person).  On arrival we bumped into Jenna and James from our school in San Pedro so spent the first night drinking cubetazas (buckets of beer) in the pouring rain in the lodge next to the steadily rising river.

9 o’clock in the morning: the rain is pounding down and the river is getting increasingly more aggressive. We become anxious about the upcoming day trip of caving and tubing on the same river as we chow down some eggs and coffee.  However, we jump in a pick-up truck with approximately 20 others and take the 9km ride into Semuc.  This journey is not for the faint hearted.  Due to the heavy rain, it could be compared to one of those ‘Jungle Log Flume’ rides you take at a theme park…except there was a very high chance of certain death with one wrong turn from our trusty driver.  Standing the whole way it takes approximately 50 mins to reach the caves, via steep gravel roads through thick cloud forests.

The caves: not really sure what was going to happen, but the pathway to them was flooded as the river was steadily rising.  Only the middle of the path next to the heavy waterfall from the caves above was showing, but we waded through and before we knew it we were standing at the entrance in in our smalls with candles in our hands.  “Before we go in guys, can every one swim?  Does anyone have asthma?” A series of sensible questions were asked of  us in broken English as we stood outside, with one girl looking sheepish saying she could ‘sort of swim’.  The Brit in us couldn’t help thinking about how much health and safety legislation this would be breaching back home.  However in we went, in the freezing dark water, neck deep with bats flying around our heads.

Pathway to the caves is mostly flooded

Swimming through the dark caves with thick water currents and then scrambling over rock faces, at all times holding a candle above our heads with the guides screaming and howling like crazy bastards.  This is when the guides said we have to go back or we will drown.  Not very comforting when one in the pitch black murky waters with only a half burnt candle to protect you.  Back we went, the same way, including the added bonus of sliding off a rock face into the dark cave pools below.  Ollie being the first gringo to go, she let out a sound I have never heard her make before, followed by my own tirade of foul language and heavy splash.  Needless to say, watching the rest come down was hilarious.  Emerging from the caves our faces were painted black with soot and orange from some kind of flower by the guides. 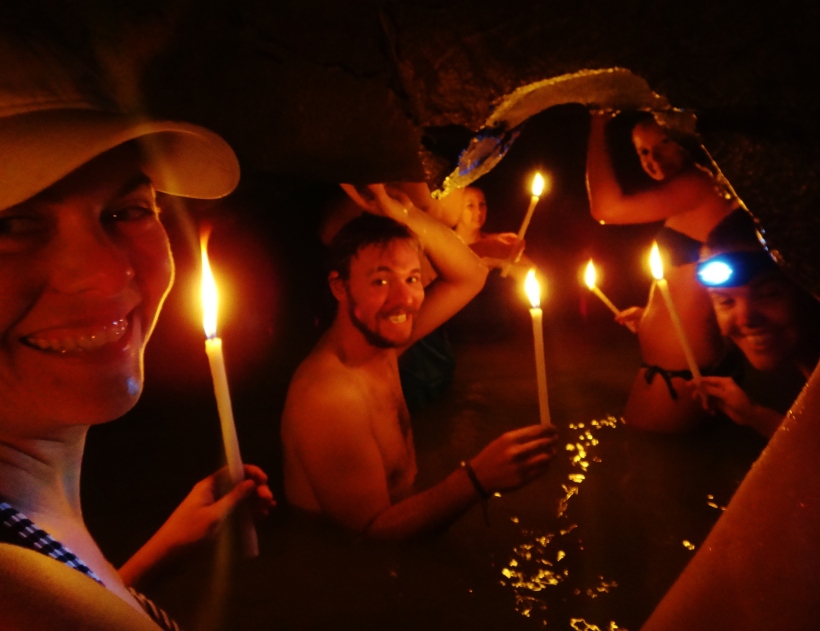 We’d like to thank Alexa and the girls for the cave shots!

It got a lot damn deeper!

No sooner were we out than we were walking with rubber rings towards the outrageously heavy rapids of the Rio Cahabón.  With the water still rising, the current gaining strength and the banks being flooded, getting in was one of the stupidest things we have ever done.  We set off in a line of five, all clinging to each-others feet, franticly trying to paddle away from the middle of the river, but forgetting the submerged shrubbery.  We quickly came apart, losing one girl straight off; she grabbed Ollie’s feet for dear life.  Then I went in after hitting a tree and had to wrestle the tube free from a branch under water.  We all made it out without drowning, but certainly a lot damper and colder than we went in. 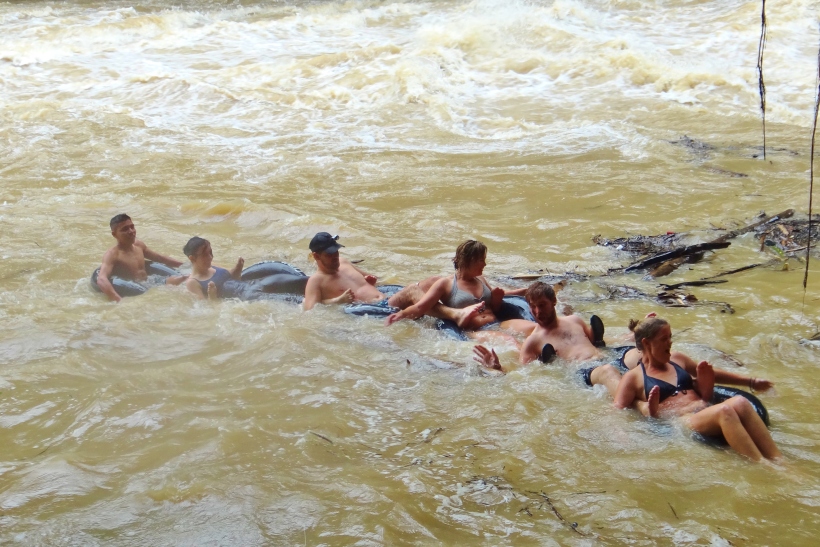 Making our way back to the entrance of the caves, the pathway was completely submerged now, and we all waded back in with two of the Canadian girls going completely over and one German girl managing to rip off her toenail and then fainting into the river.  My toe nail nearly suffered the same fate, but I managed to move my foot pretty quickly.  The only other casualties were some minor cuts and scrapes amongst the rest of the crew.

The guide leading the last few through the sunken path

So far this was a pretty incredible and high energy day and we hadn’t even made it to Semuc Champey yet.  Awesome stuff!

After a quick lunch of BBQ’d chicken and rice we walked into Semuc Champey national park and trekked the 1.2km up the slippery slopes into the cloud canopy to the Mirador lookout point.  Our first sight of Semuc was incredible.  The green lagoon seems to snake through a valley of thick green with clouds and mist floating past underneath and in front of us.

Descending to the pools was a slippery task, but soon we were at the first point where looking north you can see the Rio Cahabón smashing its way under the first pool and to the south from the same spot, a calm series of glimmering lagoon like pools gently flowing into each other.  As we get to the next pool I decide to jump in and wallow around a bit, soon followed by Ollie and then some others from our group.  Words can’t describe how beautiful this place is and trying just wouldn’t do it justice, so here’s some more pictures of it.

In I go…as you can see, I need to work on the tan still! 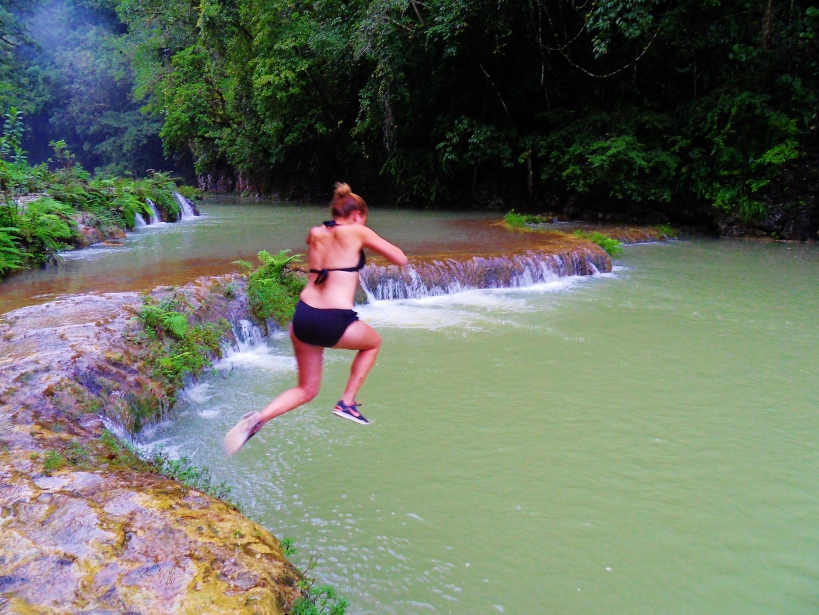 in she goes…Check out those tan lines! 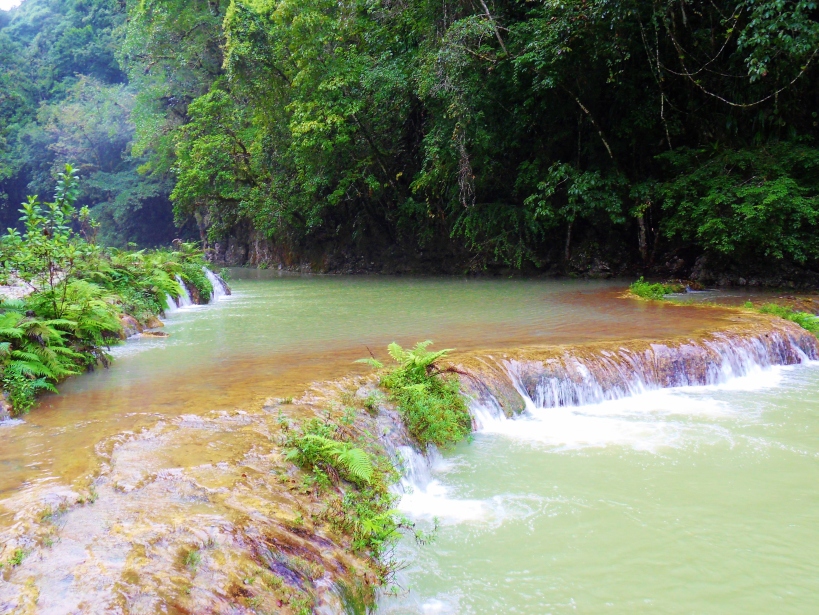 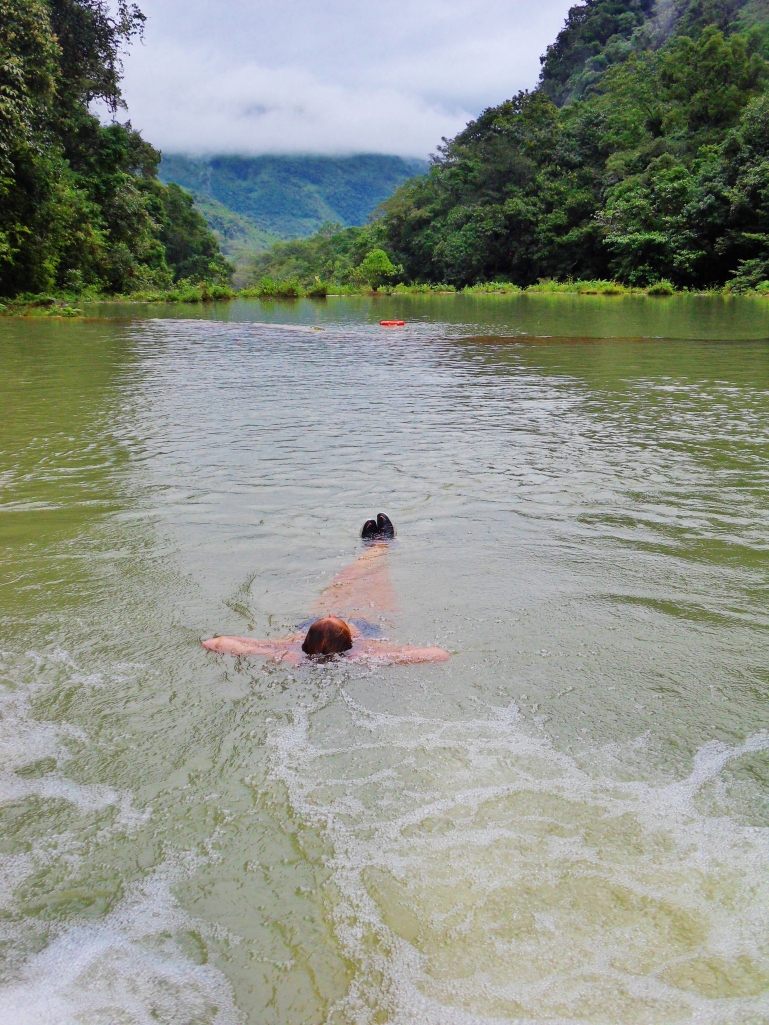 Kill nothing but time 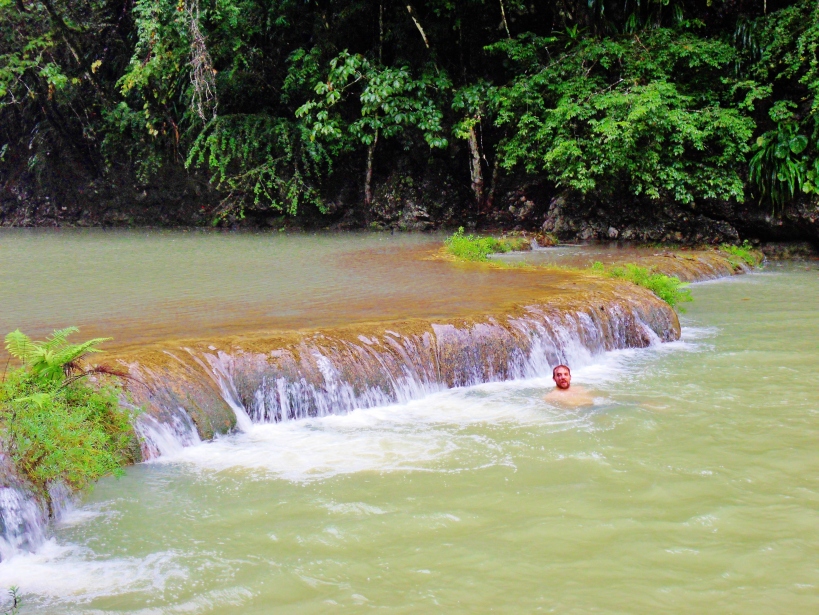 After heading back the same perilous way we came we hit the bar for some fine Italian buffet action and some beers, leading to a poor decision to join the Swiss, American and Canadians from the trip in a round of ring-of-fire, while we taught them the way to play Fuzzy Duck.  Apparently I am a Cardinal now? The rest is a bit hazy, but my god what an incredible day! 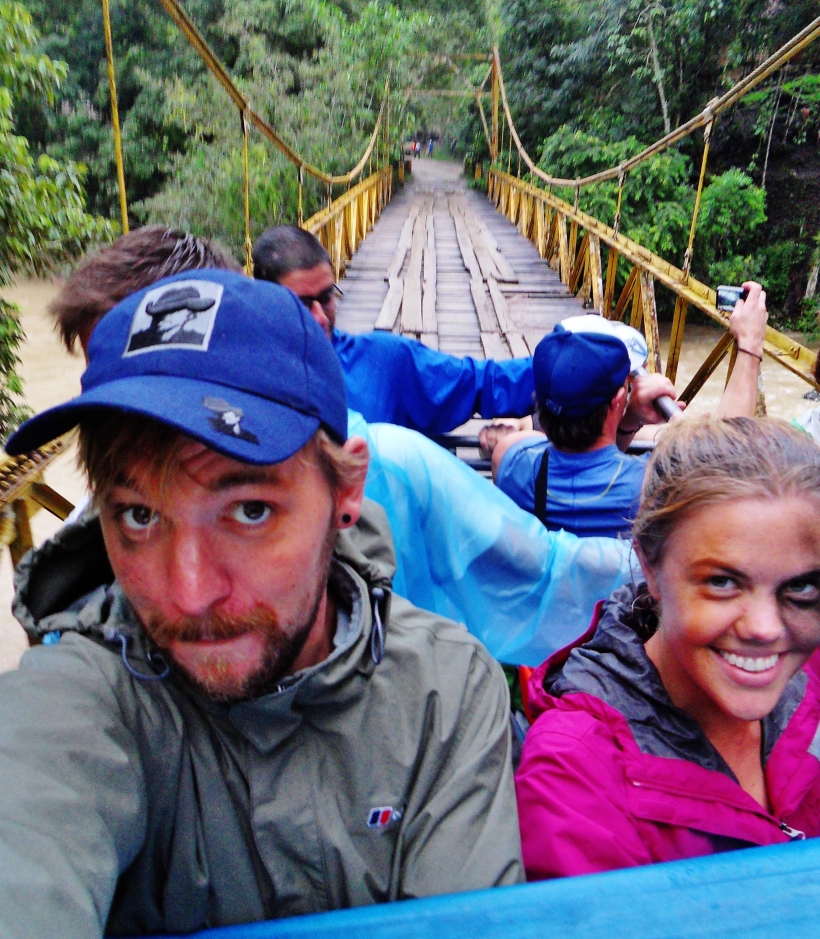 I feared this place, being well and truly established on the Gringo trail would be jam packed and full of touts and people at every turn.  It wasn’t.  The hostels all offer daily tours which keeps the bod’s flowing through, leaving the parks and caves to a couple of groups each day.  We saw one other group that day and it was very briefly as well.  The place still has a very much unspoiled and wild feel to it.  Probably one of the most exciting and memorable things we have ever done but…absolutely exhausting! 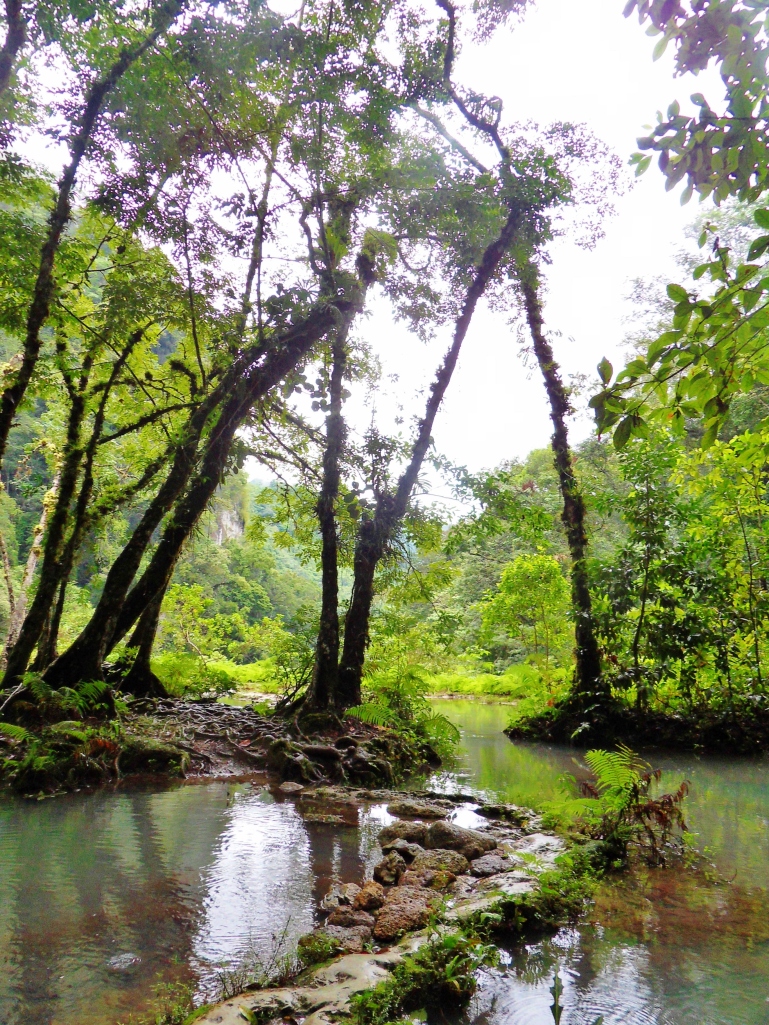