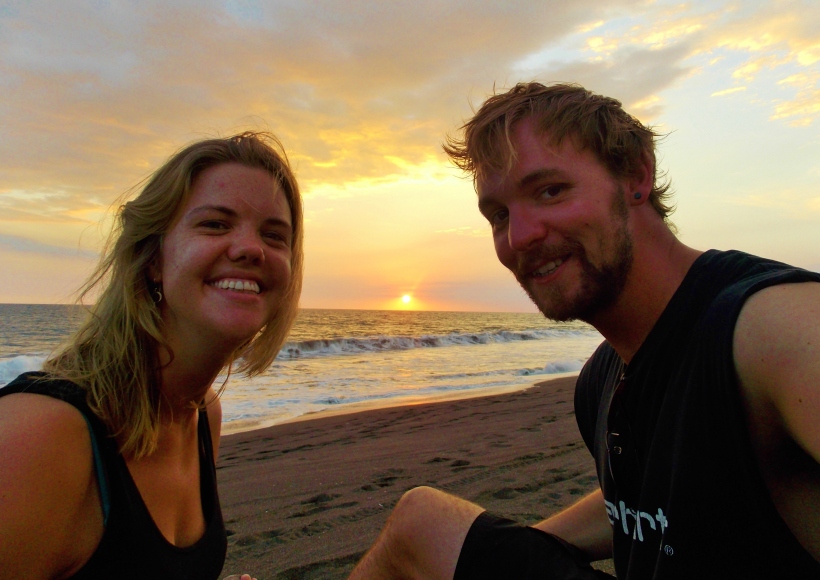 So you hear nothing for two weeks and then two posts come along at once.  Well, Guatemala has some-what slowed us down.   After our 10 days at Lake Atitlan we decided to head for some sunshine on the Pacific coast.  A 6 hour bus took us via the colonial city of Antigua and then on to the seemingly endless black sand beach of Monterrico.  It’s been a while since we had some beach action and also, some proper sunshine so we had high expectations.  We were not disappointed as the temperature rapidly increased as we neared the coastline.  Accompanied by an American ex-pat Hostel owner from Antigua we cracked a couple of beers in anticipation of days doing nothing ahead.

Skip to the snaps!

We stayed at the El Delfin, which is one of your two main options there (The other main one being Johnny’s Place).  It’s best described as a budget travelers resort, with reasonably priced rooms, cheap bar, good food and a swimming pool…plus plenty of hammocks.  The latter being something I am becoming quite accustomed to as Ollie has already mentioned.  Four nights for the price of three was a cheeky deal we took up, meaning a price of 150Q per night.

Leave nothing but footprints 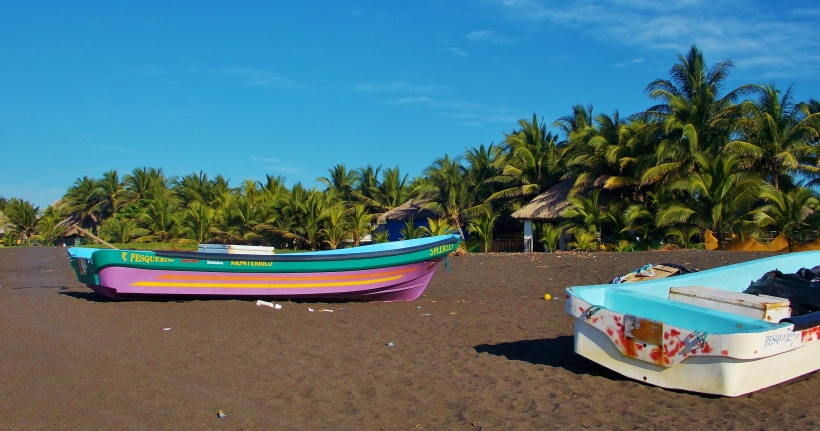 What did we do?  Nothing!  Sweet FA.  We sat in hammocks, drank some cold brews and read many books whilst listening to the ferocious Pacific pound at the boiling black sand with a soothing constancy.  What can you do there?  Well if you want to get up early (5am early), you can take a tour of the mangroves for some bird/animal spotting.  However if you want a later activity, you can go to the turtle refuge in the evening and see them being released…or something like that.  As you can imagine by my previous description of our activities, I was somewhat one track minded and took very little interest in the fella’s persistent sales pitch.  Plus it was in Spanish so Ollie was his main target.

Nothing much else to do here but switch off and enjoy some magnificent sunsets.

What it has given us time to do is think about where we’ve been so far and where we want to go next.  And we still don’t know.  The main quandary that seems to be plaguing us right now is where we are going to spend Christmas and NYE.  Does it really matter…probably not?  Let’s not worry about the destination and enjoy the journey.  Or something clichéd like that…

Either way, I can highly recommend Monterrico for a little R&R if you’re in Guatemala.  Only 2.5 hours from Antigua; it’s worth it.  I am told that the best weather is between November and February.  The town itself is one paved road with a selection of identically priced ‘Comedors’ offering Fried Fish, Fried Chicken or Ceviche.   We ate out a couple of times and it was all good, but the food at El Delfin is just as good (possibly better) for the same price.

Our only complaint is the mosquitos who managed to bite us in places we didn’t know we had.   So, if you do go, make sure you bathe heavily in deet every night.