It’s dark when we arrive in Antigua from Monterrico, and we emerge from the 3 hour bus ride scratching our selves like flea ridden dogs from the sheer volume of mosquito bites we were sporting (I reckon I had over 50!).  After sorting accommodation for a night we venture out to into the busy streets in search of supplies, food and a cold beer; all of which were readily available at each turn here. 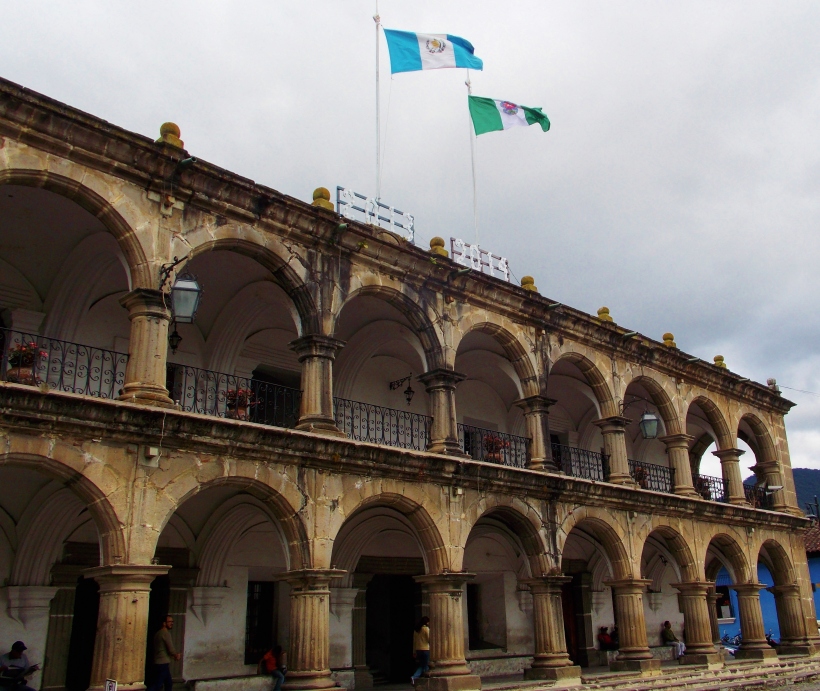 Antigua is a brightly-coloured colonial city complete with cobbled streets, which is nestled in a dark green valley.  Volcán Agua stands visible to you at most points in the town as it sits poking through the clouds to the southern point.  The city itself is a UNESCO world heritage site and strict building regulations mean it stays bloody delightful.  The lack of buildings over two stories high affords you a decent view from pretty much any second floor window or terrace.  1773 saw the city crumble to an earthquake and many of the colonial ruins still lie untouched alongside the rest of the surviving buildings.  The architecture and layout is extremely similar to San Cristobel de las Casas in Mexico, to the point where walking up 4 Ave Norte approaching the handsome Parque Central, I had a mild bout of confusion and thought I was back in the high altitude Chiapas town. 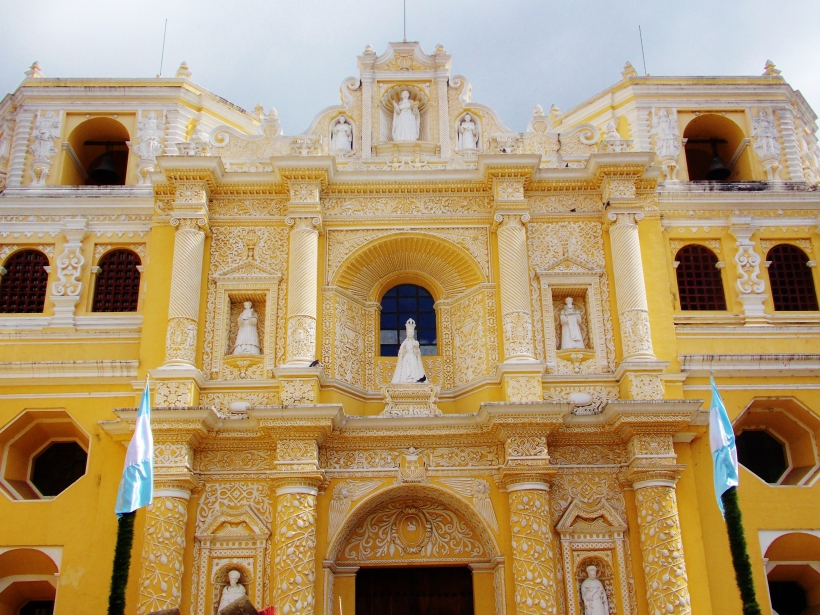 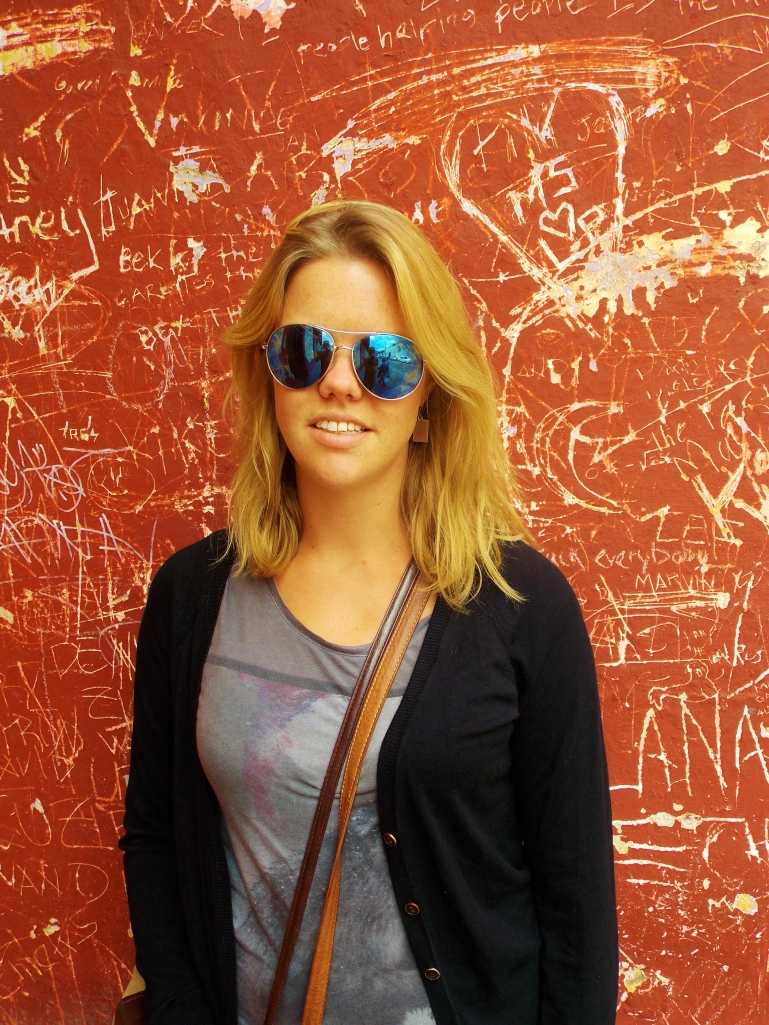 So on our first night here we found our way into the brightly lit-central square of Parque Central and admired the impressive architecture and started to soak up the general laid-back vibe the place has.  Seeking refreshment we headed to ‘The Ocelot Bar’ but when we entered we found that the building opened into a twee courtyard and we were surrounded by a few others establishments as well.  After meeting up with an American we had met in Lake Atitlán at the Spanish school we headed for ‘Café No Se’ with its promise of cold beer and mezcal.  The dark and purposely dingy bar has a smaller bar to the side which sells its own brand of mezcal which they have proudly smuggled out of Oaxaca for a few years and officially produce it now under the name ‘Ilegal Mezcal’.  The Brit behind the bar was happy to tell us the story and pointed out the one lonely bottle of tequila that sits on the back bar in case the cops come looking, having to claim that the mezcal is just decoration.  This was also the first place we came face-to-face with Maximón who is the ‘evil saint’ also known as San Simón as he has a shrine in the back where you give him booze and smokes.  Needless to say that we had a good night and the one thing I can remember clearly is speaking with a Dutch guy and learning about/discussing the finer points of Swaffleing’.

The shrine to Maximon the Evil Saint

We had two full days in the city and we moved to the much coveted (and deservedly so) Yellow House hostel.   One day was to be used to venture up Volcán Pacaya following my defeat by San Pedro and the other was to just for exploring.  The weather was not great so we decided to abandon the volcano trek for a lighter day of further sightseeing.  We spent the whole first day just walking through the cobbled streets, admiring the colourful buildings and complimentary weathered effect that they have succumbed to. 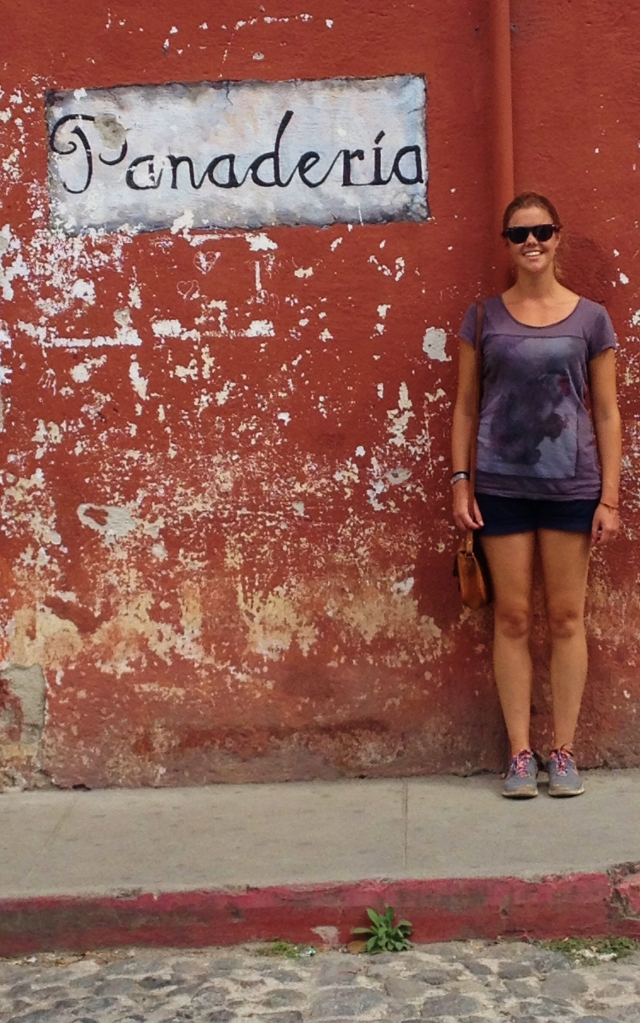 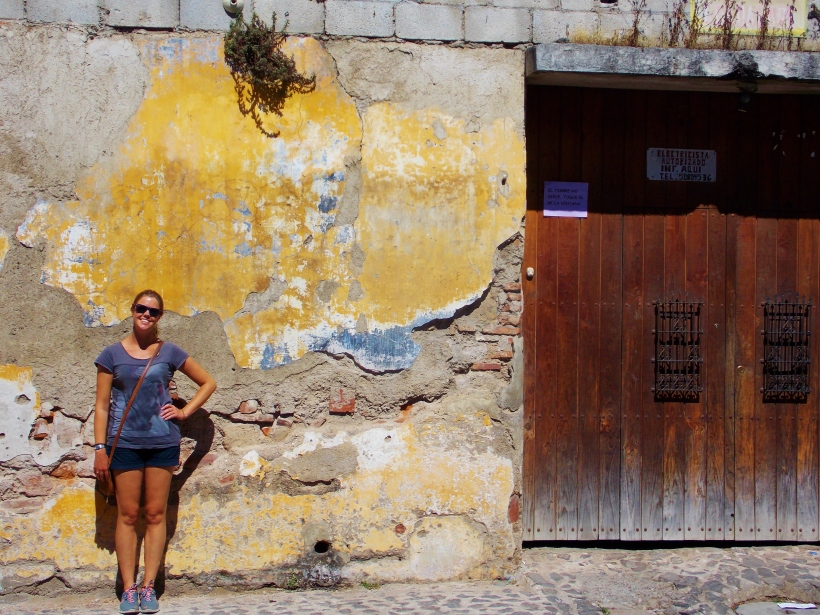 Colonial ruins and churches are everywhere and we decided to pay to visit the peaceful ‘San Jerónimo’ ruins which were once a church and school before the quake.  This was a top little spot and we had it almost to ourselves apart from some locals who get in for next to nothing and were taking advantage of the peace by having a picnic in the scenic gardens. 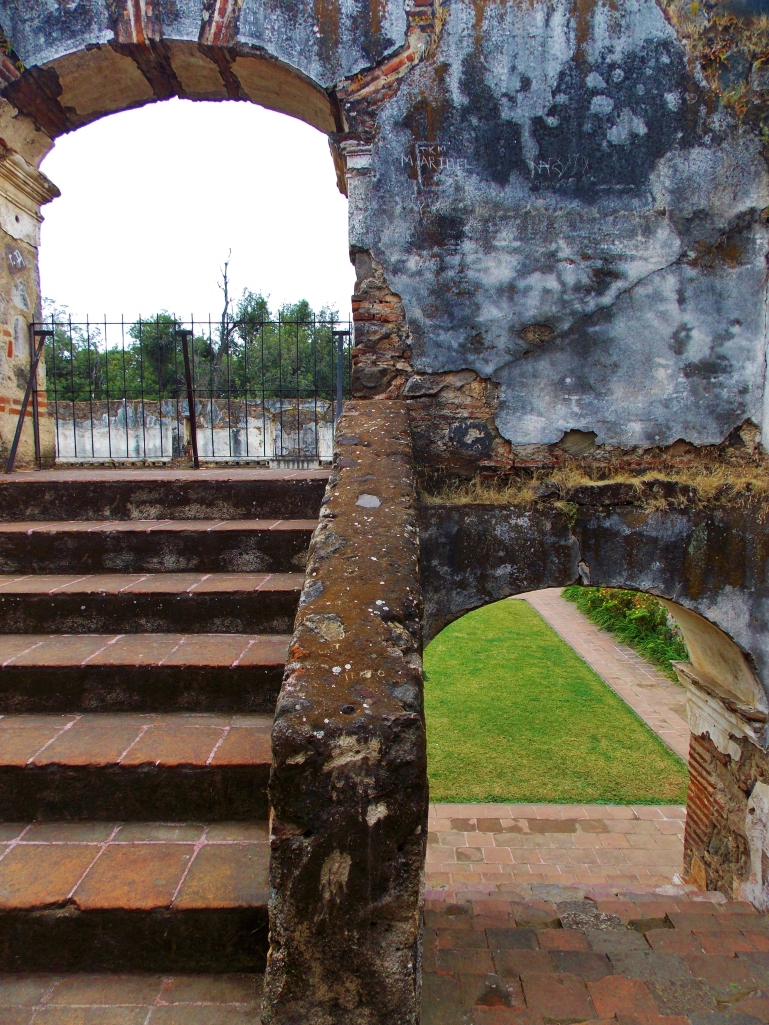 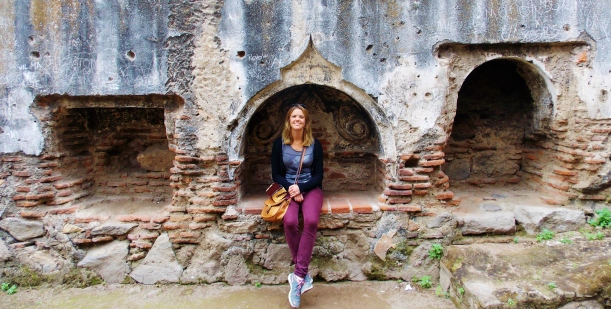 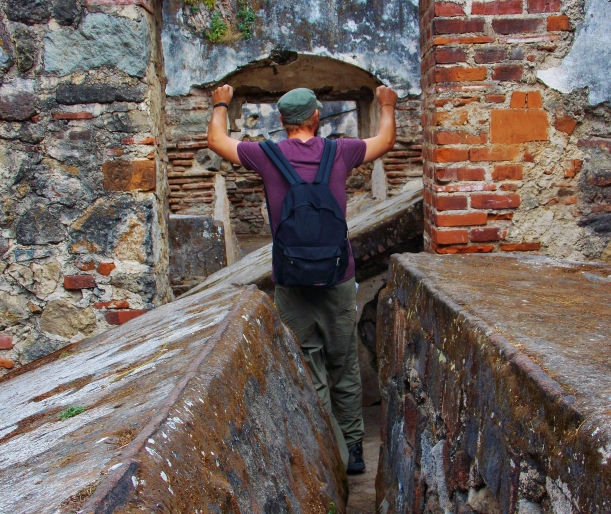 A visit to the local market was good fun with all kinds of weird and wonderful things on offer including the fruit called ‘Sapote’ that Ollie has been going on about since she left Cuba and she finally found it here.  One happy traveller!

The second day was a late starter and feeling refreshed we hiked up to Cerro de la Cruz, which is a lookout point over Antigua and Volcán Agua.  It was a stunning view. 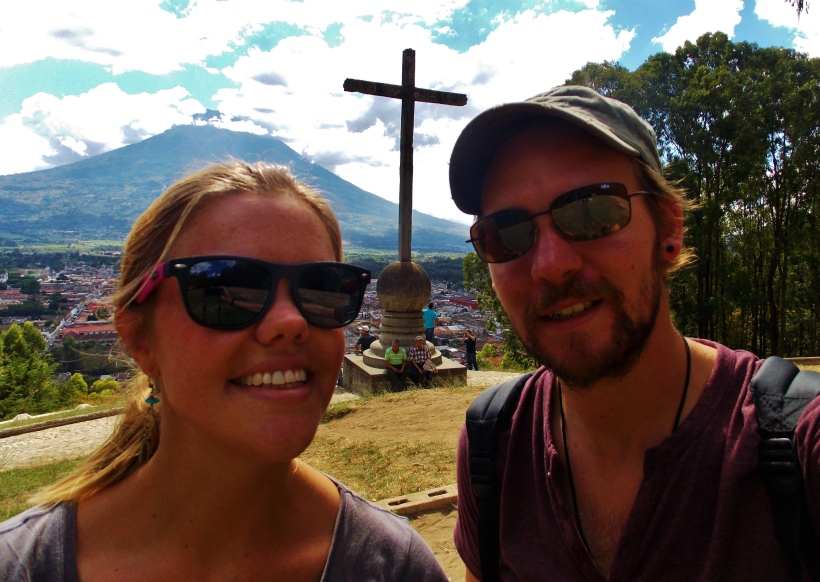 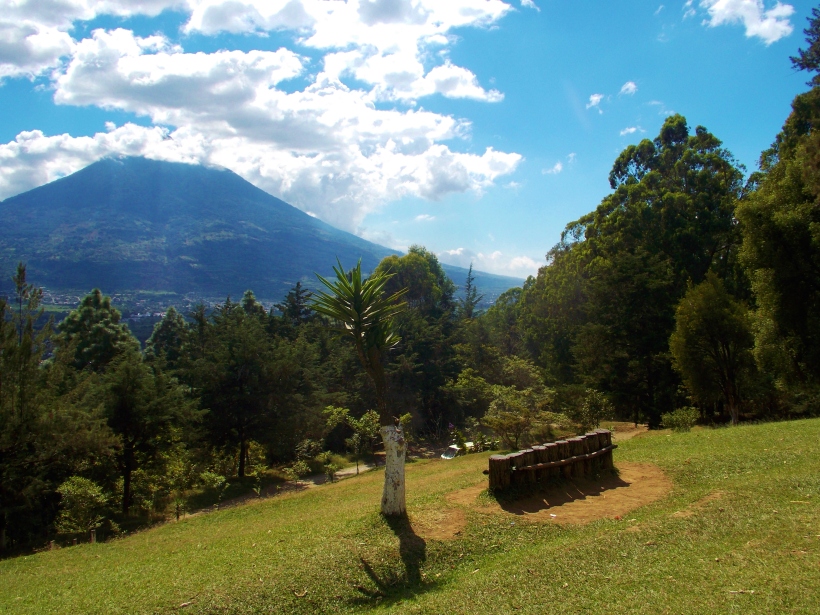 Antigua is a main tourist draw and many people come here and use it as a base to take trips to the rest of the Gringo trail in the country.  I was slightly apprehensive about this place as we had heard lots of reports of crime against tourists on the way down south, but we saw none of that.  The local life going on around the tourist army is a friendly one with the majority of locals giving the obligatory ‘Hola’ as you walk past them in the street.  We are on a short time frame in Guatemala and it was a shame to leave this spot so soon as I could have easily stayed for at least a week.   It is not kind to a backpacker’s wallet however.  But, if you’re ever in the area it would be foolish not to stop by. 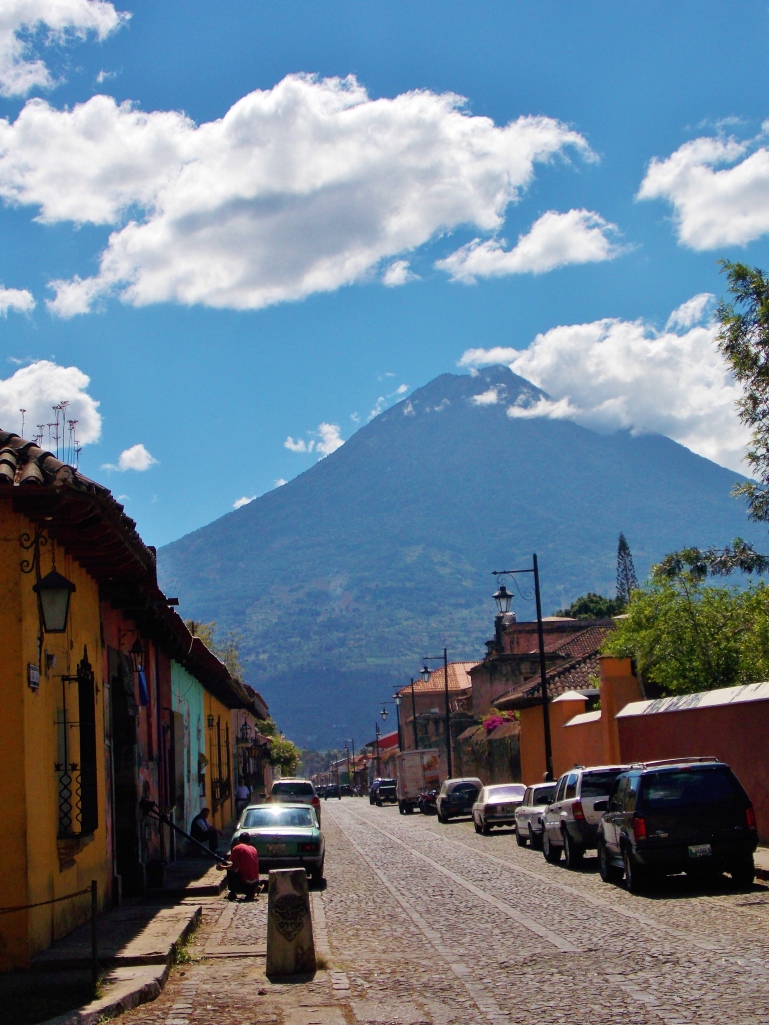