After our first night in Panajachel and our first taste of Guatemalan beers (Brahva and Gallo) we awoke early and padded down towards the lake for our first glimpse in daylight. It did not disappoint. The clear morning light that high altitude brings (around 1500m here) shone over the lake and the volcanoes in the distance, one of the most fantastic sights we’ve probably ever seen. The lake itself is 19km long and 10km wide, and over 320m deep. The surrounding volcanoes, many still active, give a clue as to how it was formed – as a result of a huge volcanic explosion some 85,000 years ago.

We packed our bags and headed down to the dock to catch a boat (known as a lancha) over to San Pedro la Laguna, one of the many towns that surround the lake. San Pedro has something of a reputation as a ‘party town’, so we weren’t too sure what to expect. We thought we’d maybe stay a day or two then head further round. As it was we ended staying for 10 days… 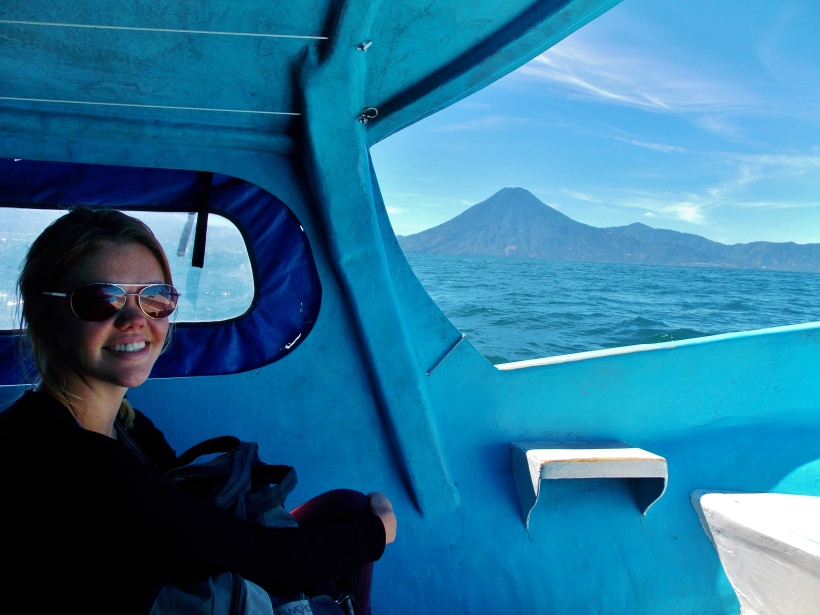 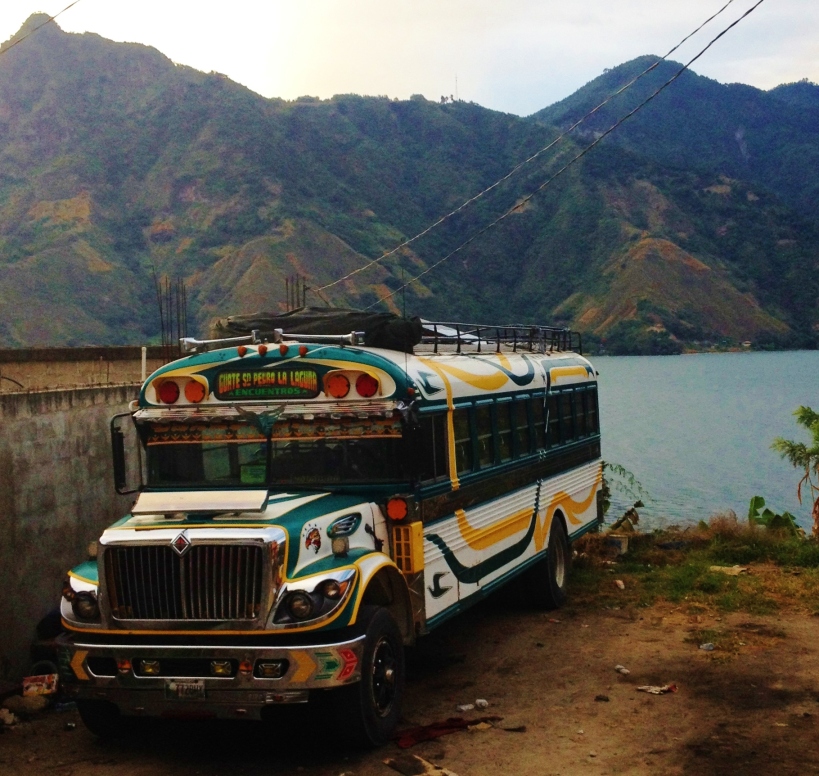 After wandering through the winding alleys of San Pedro we found a hostel called Zoola with a very relaxed air about it, including a bar and pool right down by the lake. And a hammock. This was the beginning of Rich’s love affair with hammocks that shows no sign of abating… Agreeing that this really wasn’t a bad spot we decided to stick around in the town and spend a week doing Spanish classes. For me some serious revision was in order after barely speaking a word since leaving university in 2007, and Rich was keen to understand more of what was going on around us and ask for what he wants. Which is usually a beer. So we signed up with one of the many local schools (Orbita) at the bargain rate of US$89 for a week’s one-on-one tuition, for 4 hours per day. This left us with Saturday and Sunday to enjoy before school started on Monday. In a fit of energetic resolve we also signed up to be woken up at 5.30am the following morning to climb up the nearest volcano, Volcán San Pedro. Our final decision of the day was less wise – rather than going to bed after dinner we spent the rest of the night at the bar chatting to a cast of interesting folk and taking advantage of the free shots with each drink. This was a poor choice. The next morning, before the sun was up we were driving up out of the town in a tuk-tuk to the national park, where we met Pedro, our guide for the day. We then began to walk uphill. Uphill is an understatement; this was essentially like climbing the stairs for not-far-off 3 hours. Just over halfway Rich’s digestive system gave up the ghost and he retreated to the woods to do some terrible things while I carried on up to the top with Pedro. Rich is not normally negligent enough to send me off into the woods alone with a man carrying a machete, but Pedro seemed like a good guy… An hour later we were at the top, over 3000m up, and despite the pain it was worth it. The views stretched out forever, into Mexico I’m told, and it really did feel like standing on top of the world. After descending, retrieving Rich on the way, we were back in the town for lunchtime and a big sit down. Being a Saturday, and our final night off before school we were once again drawn back to the Zoola bar after some dinner where we whiled away a few more hours chatting to some new found friends and some boys from Ireland singing all the old songs, eventually following some fire spinners to an ‘after-party’ some walk away through some corn fields. I forget the rest. One thing we have taken from this however, is that Mirinda is not an acceptable mixer for Captain Morgan.

Ollie and the mighty Pedro! 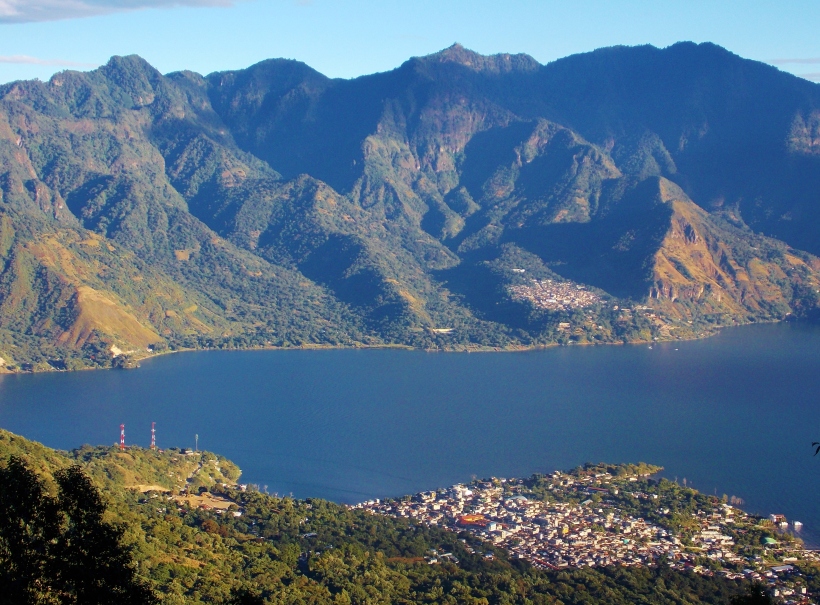 6am view of the lake

It was time to check out of the Zoola if we were to achieve anything that week, so we negotiated a very good weekly rate (US$10 a night) at a hotel called Pinocchio with a hammock on the terrace that looked out over the lake and a very friendly tabby cat with a penchant for Doritos, who we named Oscar.

The next week was a shock to the system in terms of setting the alarm for 7.30am each day but with a little coaxing and some excellent local coffee from Café Atitlán on the way to school each morning we were on time every day. The school gave classes on two open-air terraces, with each student sat at a table with their teacher with views over the lake. It was a stunning spot but sometimes a little hard to concentrate with views like that! My teacher José was a lovely softly-spoken chap who spoke two Mayan languages, Tz’utujil and Quiché, as well and Spanish and some English. He quickly established that while I could more or less speak Spanish, the effort of finding the vocab in the recesses of my brain meant that I was often filling in the gaps with the wrong pronouns, verbs and tenses. The whole week was a great opportunity for me to chat with him while he gently corrected my errors. We chatted for hours about the history of Lake Atitlan and the local people, politics. I even learnt a few words of Tz’utujil, a fascinating-sounding languages full of letters including a Welsh-style ‘ll’, an Arabic-style ‘q’ and clicking glottal stops. Rich also had a great teacher, another trilingual guy although only 20 years old who introduced him to the joys of conjugating verbs. He learnt a huge amount for just a week though and can go off and order and buy things without my assistance, which may or may not be a good thing… 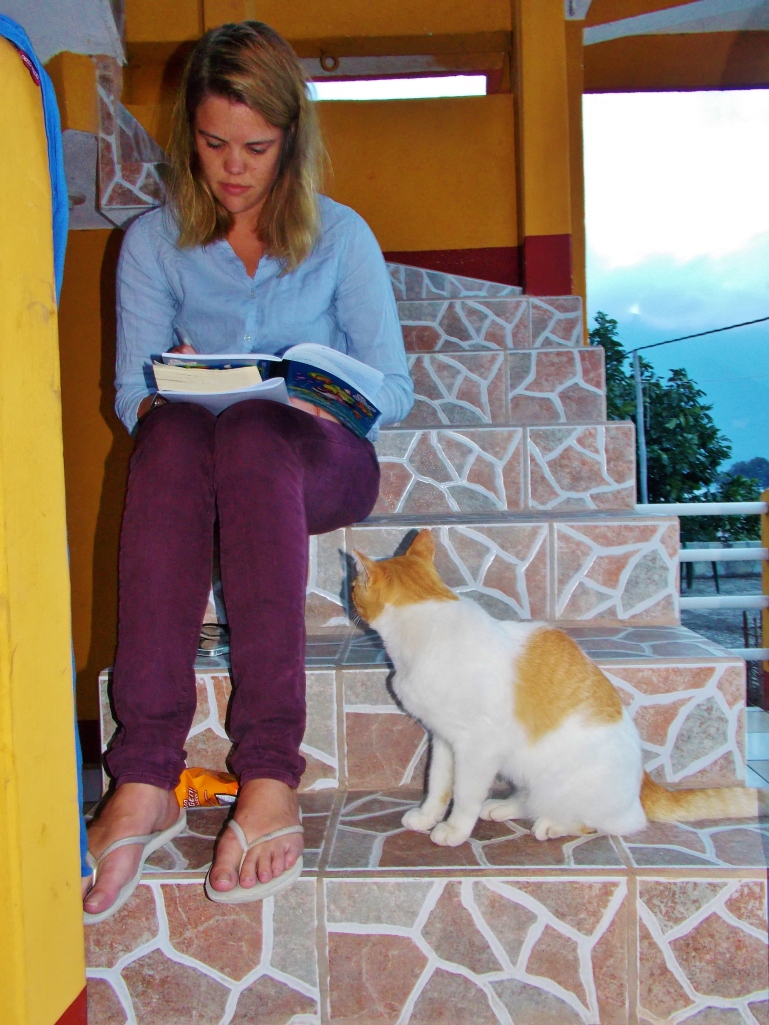 Oscar helping Ollie with her homework

The rest of that week was fairly low-key, our afternoons spent doing homework and our evenings cooking dinner, chatting to our Dutch neighbours, or eating out at one of the fantastic local gringo places. San Pedro has a big Israeli presence which meant excellent falafel and hummus (especially at  Hummus Ya)! We rewarded ourselves for a week of hard studying with some incredible homemade curries at the ‘Irish’ pub ‘The Clover’ – home-made naans, samosas; the lot. All in including beers for under a tenner. Our final night out there was at the opening of a fantastic lake-side bar called Sublime, listening to live music and watching the fire-spinners again. It would have been VERY easy to stay in San Pedro for some time; it was a beautiful spot to hang our hats for a while and a welcome break from being on the road, but as always with travelling the lure of what the next place might have in store means that you move on.

2 thoughts on “San Pedro La Laguna – Days by the lake”