It could have been the fried chicken dinner from Pollo Campero.  It could have been the over-consumption of Pilsner.  It may even have been the $1.30 pupusa breakfast on that street corner.  Whatever it was, I was suffering horrendously in the gastric region.  I will leave it at that.  However, we hopped on a bus #210 from Santa Ana bound for Ahuachapán with the intention of changing to bus #264 to take us to Tacuba, where we could explore the El Bosque Imposible national park.  As we left Santa Ana we slowly crawled out of the market, while through the aisle came an endless stream of vendors for 10 minutes straight, selling everything you could ever need from parasite medication, avocadoes, rat poison, gaffa tape, ice cream, socks and not surprisingly, pupusas.  You wouldn’t need to get off the bus to do your weekly shop here!

We got to Tacuba, a tiny town cobbled street town, sitting 1300m above sea level and found our way to Hostal Mama y Papa, where that have a great mirador looking over the town and the national park, relatively cheap rooms and some aggressive attack ducks.  Unfortunately, I was unwell for two more days, so we decided to move on without doing a hike, but it was a nice place to recuperate in peace.  There really is nothing to do in Tacuba, unless you want to go to the Bosque.

Reflection of the view from the mirador at Mumas and Papas 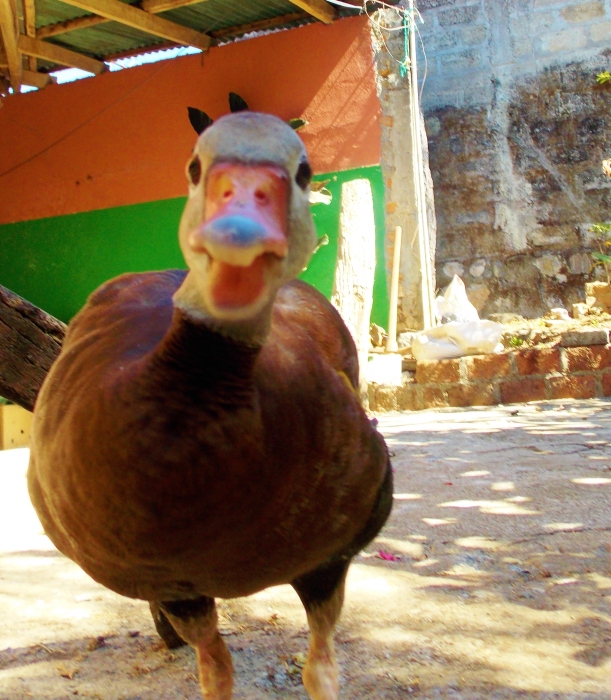 Packed into a mini chicken bus made for 35 people with approximately 80 other souls we were back to Ahuachapán, where we were soon an a #249 headed down the Ruta de las Flores, which is another of the areas that the country is marketing to tourists.  It’s about a 30km stretch of road lined by wild flowers and framed by some 16 long since extinct volcanoes that now serve as coffee plantations.  The driver ‘tazzed’ past the towns of Ataco and Apaneca bound for our next destination Juayúa, at such a speed I couldn’t tell you if there actually were any wildflowers.  Some locals took pleasure in laughing at Ollie’s facial expressions during the ride, as did I.

One of the extinct volcanoes along the Ruta de las Flores

Juayúa is yet another attractive cobbled street town with a handsome white-washed church, peaceful centre square and colourfully painted buildings.  What sets it apart from the rest is the weekly food festival held on Saturdays and Sundays 11am-5pm.  We wandered around until we came to the little haven of Hotel Anahuac where we checked in for 3 nights and booked a waterfall hike for the next day.

The busy streets of Juayua around the white washed church

Up at 8am, we follow our local guide called Douglas into the hills with a Canadian couple, and a pack of dogs headed by the guide’s own pooch.  We signed up to hike through the fields and see seven waterfalls along the way.  It was so much more than that.  We approached the edge of what we soon discovered to be a dried up waterfall we could see the first cascade of the day which was streaming out of the rock face in front of us halfway down from underground rivers.  We then walked to another waterfall popular with local tourists where the Canadians took a dip.  I could go on and describe each waterfall in detail.  Let’s just say they were all beautiful and different from each other in remarkable ways.  Douglas disappeared for some time, when he returned we discovered he had tied some ropes so we could rappel down the face of a waterfall into the valley below.  This was unexpected and very challenging in flip-flops, but we all made it down without falling to a watery death.  Here are some pretty pictures of waterfalls now…. 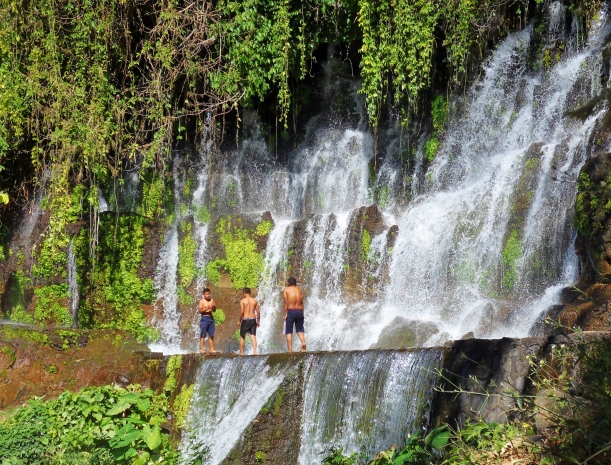 Local lads have a dip in one of the waterfalls 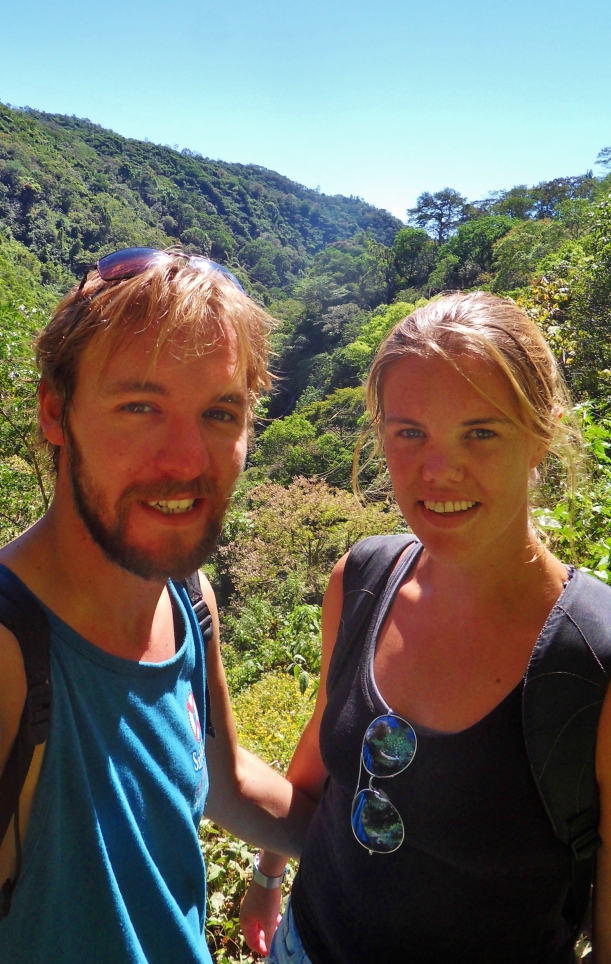 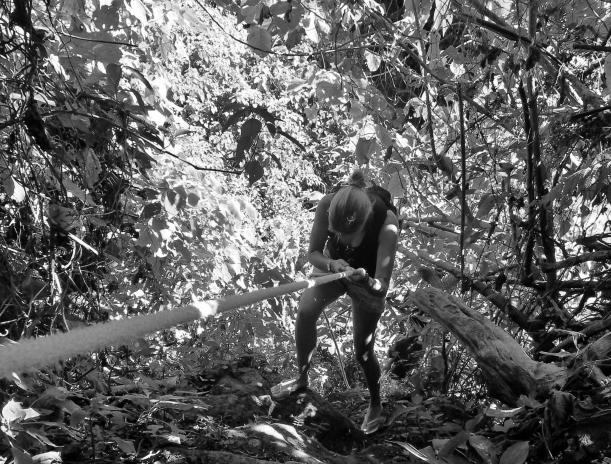 As I have said, the area is a huge producer of coffee.  The conditions of high altitude and volcanic soil are perfect for the industry.  The area is green with coffee trees and an unusual line formation is seen in the lush hills, which are trees planted by the coffee farmers to serve as wind breakers to protect the precious crop.  Hiking through these plantations gave some incredible views of the surrounding country, which seemed to be endlessly green and unspoiled as far as the eye can see.  It was a remarkable hike. 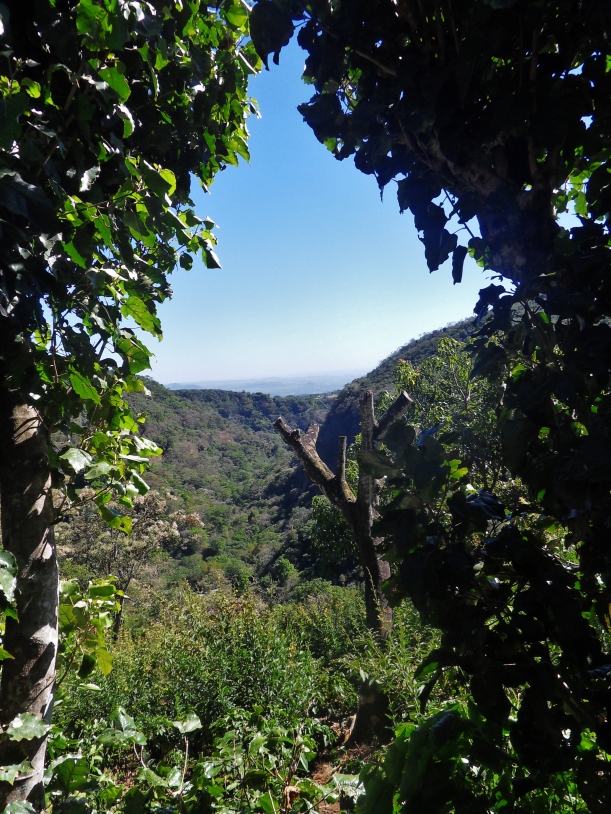 The food festival.  Wow.  We got to the centre square for some serious lunch at 2pm on a Sunday and the place was packed.  Locals and tourists (mainly El Salvadoran) shuffle excitedly past the two streets of food vendors that set up side by side, sniffing the meaty air, tasting tit-bits from touts and looking at what everyone else is eating around them.  Rabbit, Iguana, Frog and even snake are all on offer, but for us hungry traditionalist backpackers we settled on a plate of ribs and a huge chorizo, served with heaps of sides and  a couple of beers for the attractive price of $10 all in.  We then treated ourselves to a couple of crispy fried prawns for dessert.  It was a fine festival, and it happens every week.  Amazing stuff.

We decided we liked Juayúa so spent another day, where the owner of Hotel Anahuac, Cesar, took us and another guy on a tour of the local coffee factory where he seemed to have free rein of the place, showing us each stage of the production of my favourite drink and explained the processes in detail. The coffee industry here is huge, as the conditions are perfect for growth.  The higher the better for coffee growth.  The flavour improves the higher you go, and it is grown up to 1800m here.  The highest in the world is in Africa at around some 2300m I am told.  It is not a native crop and was introduced many years ago with the foresight of demand from the US.  It is now shipped worldwide as the photo below will show you. 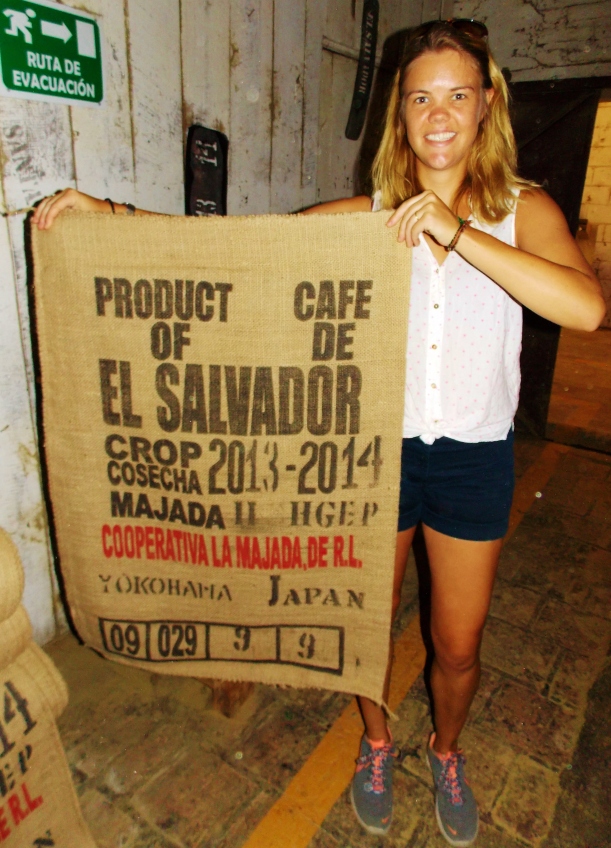 This ones going to Japan

Truck load of coffee ready for the roast

I’m gonna talk about coffee for a while now so skip ahead a couple of paragraphs if it doesn’t interest you.  Cesar then took us to his own ‘coffee compound’ in town where he hand-dries his beans in the Juayúan sun, then roasts on a small scale for local sale whilst preparing some of his most prized breeds of  coffee plants before they are ready go on the hills.  Cesar roasted some beans in front of us, while explaining the process for the 17 minute duration using a graph to help.  He instructed us on the importance of the timing, as seconds longer could change the acidity, sweetness or the body of the drink that the beans will produce.  There is basically a hell of a lot that can go wrong before the beans of your morning cup of Joe are even ground.  There is also a lot that can go wrong at the next stage…

The roast is a delicate process

I’m a coffee fiend.  Addict is probably more accurate.  I gave up grinding my own beans long ago for lack of success in my technique.  Cesar gave us some excellent tips on how to grind the perfect consistency for the style of coffee you are making.  Of course, he is an excellent Barista as well, and after introducing us to a re-emerging brewing method from 1940’s America called Chemex, he set to work on the machine.  The difference between good espresso and bad espresso is unreal.  I believe I have only been drinking the ‘bad espresso’ by my own untrained hand.  Ollie was treated to the best cappuccino of her life and instructed on how one should sip it in order to get the most out it.  After too many cups of coffee Cesar gave us a pound of coffee, that had been ground to the perfect consistency for use with our trusty coffee sock whilst on the road.  What a dude he is.

We also visited the towns of Ataco and Apaneca that we had passed on the way to Juayúa.  They were pleasant enough in a similar way, both following the trend of cobbled streets, pretty painted houses, white-washed churches near a central square and surrounded by stunning scenery.  Both very pretty, but very quiet towns. 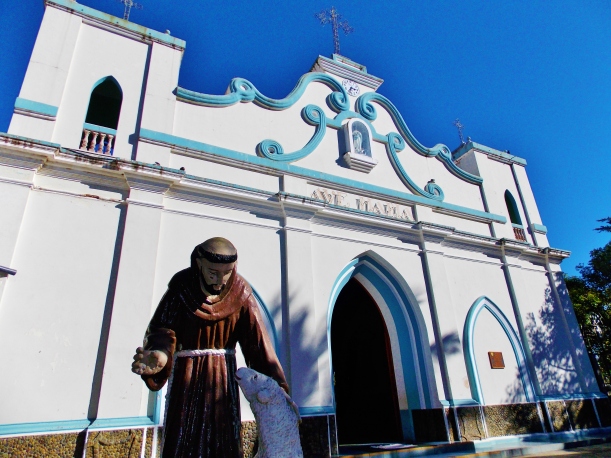 Inside the Ataco church

The distinctive wind breakers and crosses of Apaneca

El Salvador…wow.  That should be the advertising poster for this country.  What have you got in store for us next?