“Where are you traveling to sir’? asked the unusually friendly security man as he took out my toiletries bag for scanning at Gatwick. ‘Toulouse’ I replied, ‘ah, no time to lose’ he responded, smiling and nodding at me. I smiled. ‘Not many people get that’ he said. ‘I bet’ I replied.

‘No Time To Lose’ had immediately popped into my head once arrangements had been made with Richard and Ollie and I had watched the clip of that Monty Python sketch (linked to the Kamikaze Highlander Regiment sketch) and realised it was a lot funnier to the 1973 version of me. Nostalgia eh?

Toulouse is the capital city of the department of Haute-Garonne, in southwestern France. It lies on the banks of the River Garonne, 150 kilometres from the Mediterranean Sea, 230 km from the Atlantic Ocean, and 580 km from Paris. More facts at Wikipedia and elsewhere on t’interweb.

Why Toulouse? Why not is the short answer. The long is that our intrepid travellers were originally going to be off to New Zealand after stopping off in France for a family wedding in Montpellier. They would stop off in Barcelona and catch up with some friends there and I wanted to see them before they went down under. Originally Perpignan was considered for me but flights and airport arrangements for them made that difficult so Toulouse was decided upon.  The NZ plans changed but Toulouse remained on the schedule. 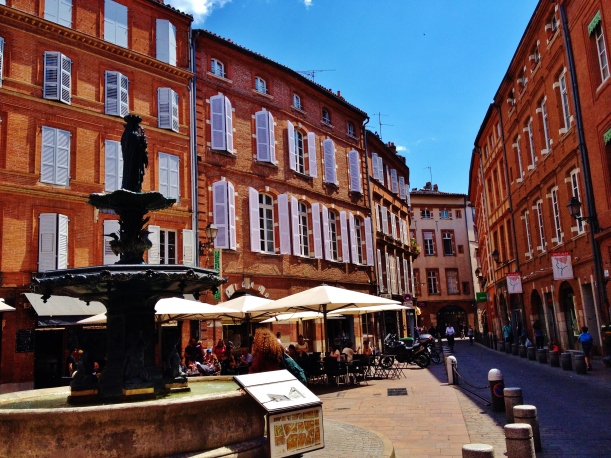 The streets of Toulouse – or the ‘Ville Rose’ as it it is known.

Thankfully, they met me at Toulouse – Blagnac airport and it was lovely to see them both again after nearly 8 months. Their blog, instagram and Skype have been fantastic; reassuring as well as really interesting but I had missed them both and my regular lunches, drinks and chats with my boy.  Seeing them in person again was wonderful.  Also this old chap would have been forlornly wandering around gazing at bus timetables for hours and eventually getting lost without the two chicken bus timetable experts who, it seemed, had worked out the city transport links within minutes of their arrival the day previously. 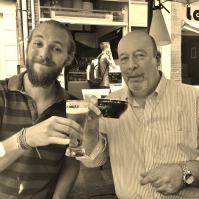 Reunited – With a fancy little cup of cider and a crêpe. 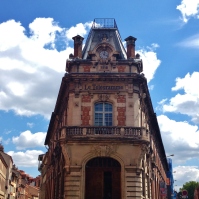 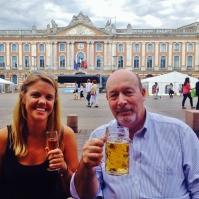 A ‘distingué’ sized beer in front of the Capitole

I was there for 5 days, 4 nights and we stayed in a very VERY bijou 2 bed apartment on the Rue Gambetta, behind Bar L’Impro with the now famous greyhound cross ‘Eddington’ and around the corner from the impressive Place du Capitole, a huge pedestrianised square where the impressive Capitole can be found. A fantastic public place in a city where, around every corner it seems, is a public square, large and small.

During the fantastic, very warm weather, the citizens of Toulouse could be found enjoying their 2 hour lunch breaks and excellent French working hours in the full bars and restaurants. 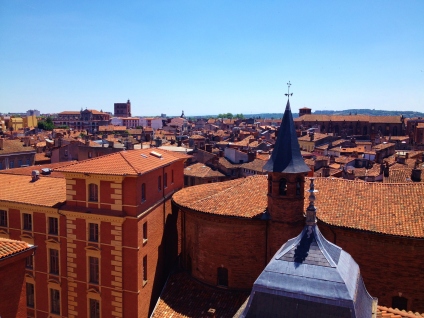 Inside the Old Cathedral 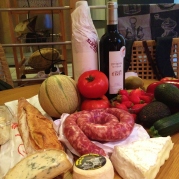 A tempting selection of local fayre – Purchased from the local market 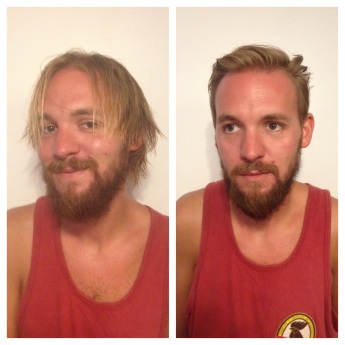 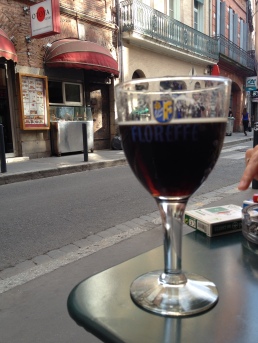 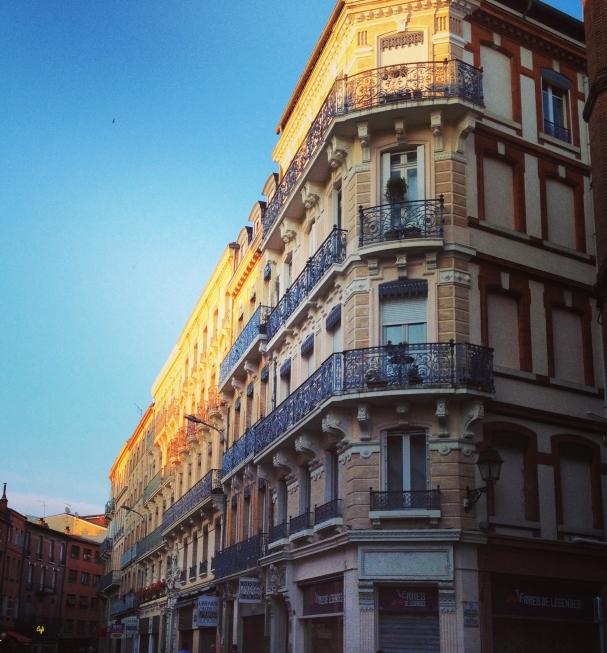 From what I saw, Toulouse is a very busy, vibrant and interesting city and well worth a visit. We mooched around the centre mostly and found it to be a safe place with a pleasant atmosphere late into the night. 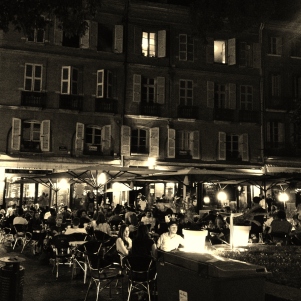 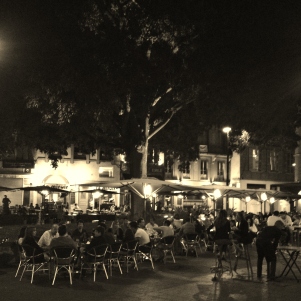 One day saw a drive west of Toulouse to the middle of nowhere near a small hamlet called Belmont in the Gers department in the midst of the Côtes de Gascogne wine region near the sleepy town of Vic Fezensac (worth a Google). I drove, the other two lunched well…. very well. Richard kept me in the right lane throughout. Fantastic countryside and great roads. 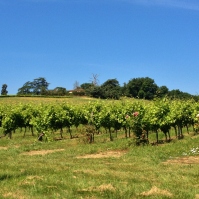 The vinyards through Gers – The area is famous for Floc 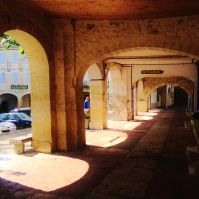 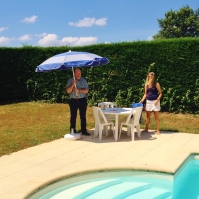 Anything to hide from the sun

Another day saw a trip by train, despite the best efforts of the unions, to Carcassone (again worth a Google) a fantastically restored medieval fortress, now a tourist trap but some great views to be had but I enjoyed the view of the castle from the ‘new’ city, chatting and people watching during a couple of beer stops in warm, busy squares. 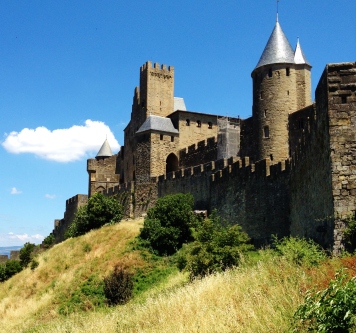 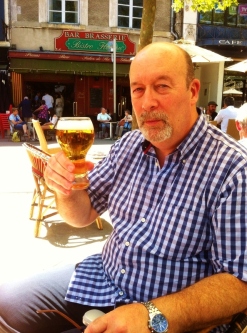 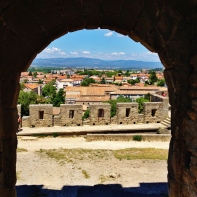 Looking down on the town below 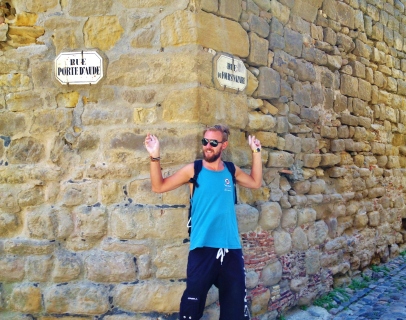 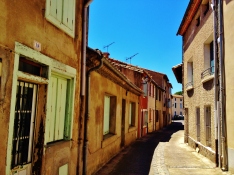 The back streets oof the old town – Carcassonne

The old bridge in Carcassone

We ate out in some really nice places, one the ‘Au Bon Graillou’ one of the fantastic restaurants that run the length of the first floor at the impressive Marché Victor Hugo (the largest covered market in the city – and what a fantastic market it is) a superb lunch ‘formule’, great atmosphere and nice friendly staff.

Another great meal, dinner this time was at the Le May restaurant on Rue Du May. Great steaks, nice atmosphere and again really friendly staff.

The indulgence at Le May

The Bar L’impro was the venue for an evening of cards and beer and on one occasion, after our visit to Le May, a father/son chat accompanied by a glass or two of Jameson. 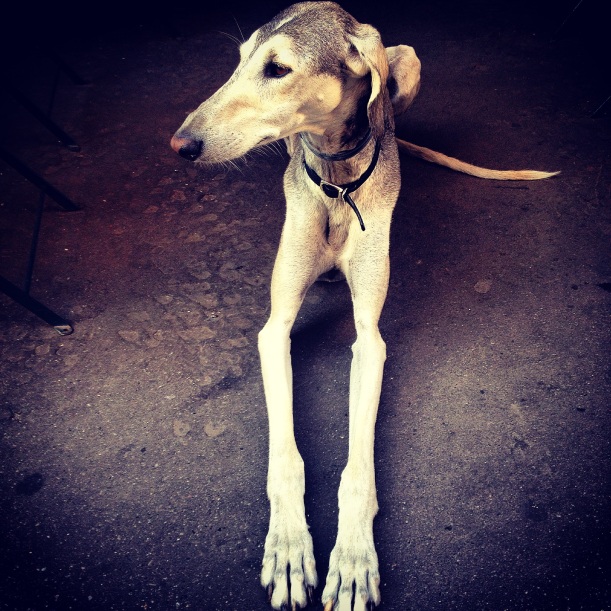 Day 5 arrived and after another nice lunch in Place St George, it was time for me to depart back home. Richard and Ollie took me to the bus stop for the airport, put a sign around my neck giving my flight number in case I got lost and damn if I didn’t get something in my eye again!

During my time with them, Richard and Ollie were planning ahead and I’m sure we’ll be reading all about it on this fantastic blog! 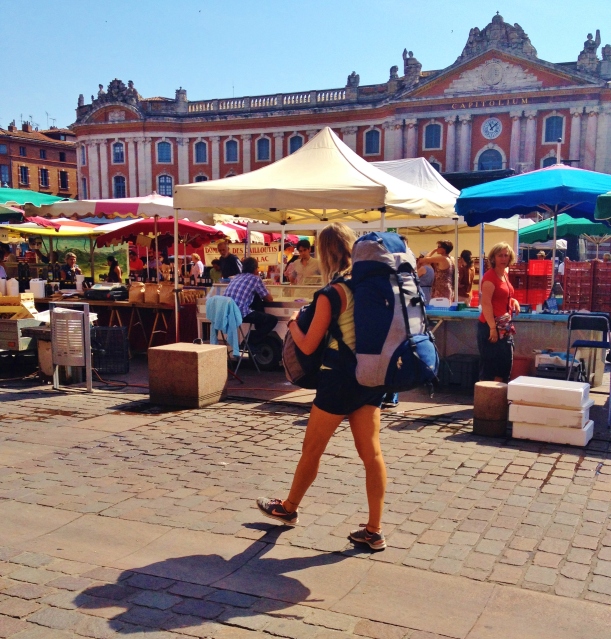