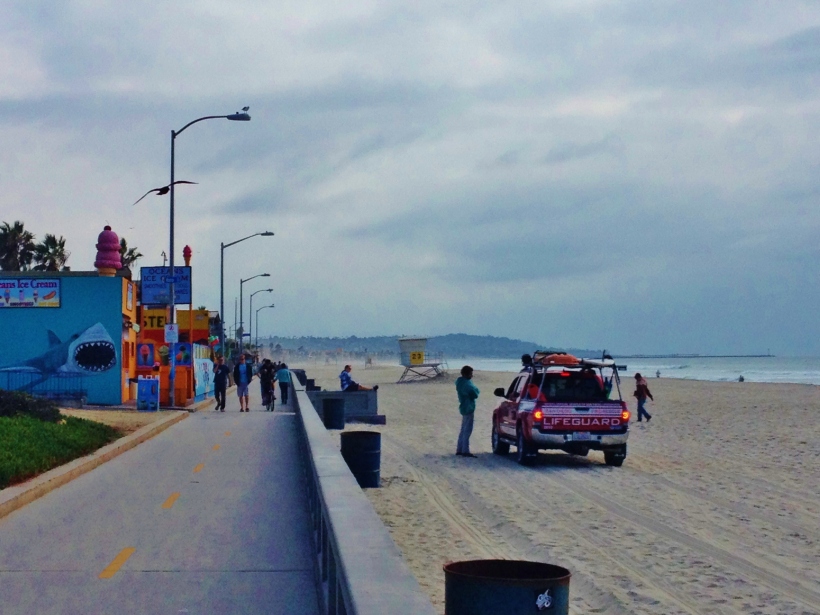 After spending two days in Downtown San Diego at the Hi Hostel in the Gaslamp Quarter we reached our first stop in Mexico.  Ensenada, Baja.  San Diego was nice enough but the weather was crappy.  The first day we grabbed our first view of the Pacific by walking down Pacific Beach to Mission Beach, before heading for some tacos at Sandbar and then managing to get on an MTV candid camera show along the front.  The second day was uneventful but drink was taken at the Barley Mash bar where they had 34 TV’s in the bar showing baseball and football.  I may have got my ear pierced by an extremely nice man with tattooed eyeballs and holes in his nose where there are not meant to be. 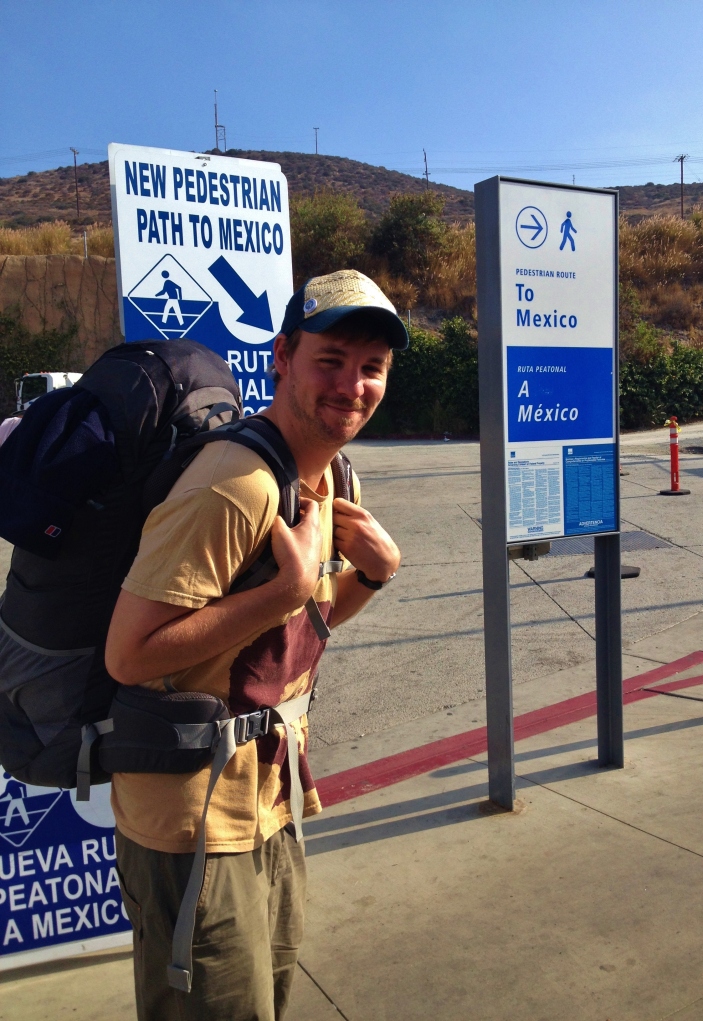 We took the Blue line tram down to San Ysidro and soon found ourselves walking straight into Tijuana without anyone giving us a second look.  It took us roughly an hour to get from our hostel to Tijuana.  We realised we would have to actually enter the country legally so we went back to a nice man in full camouflage and an assault rifle to ask him for passport stamps.  After Ollie’s Spanish degree started to pay off we were out into the melee and landed on a bus bound for Ensenada, 1.5 hours south of the infamous TJ.  Ron Burgundy sayings were soon replaced with Manu Chao’s ‘Bienvenida A Tijuana‘ but we were soon out of the bus and into the middle of this ‘Low Key version of TJ’ in Baja California Norte.

After getting lost straight off the bus, as no Mexico streets seem to have signs, we found ourselves in ‘El Corralito’ where a Mariachi band were playing in the back. Tasting our first Tequila and Indio beer at 2pm was justified by toasting a new country with the five o’clock rule dismissed for yet another day.   We spent one more day there.  A Saturday.  A cruise ship came in at 11am.  By 12pm the street was full of excitable American and Chinese tourists.  By 12:30pm everyone (The Americans mainly) were smashed and whistle-obsessed.  By 5pm, the town was dead again.  Back on the boat, bound for north of the border.  “Hey guys, haven’t you missed the boat?” The street vendor shouted at us.  We seemed to be the only gringos left in town.  We went to see the ‘Festival De Catrinas’.

Catrinas are the ‘painted skull faced ladies’ you associate with Dia De Los Muertos.  Usually looking pretty scary, most of these girls were just not that into it.  One just rocking a pair of jeans… Personally I liked the fancy dress dog competition that preceded this main event, but each to their own I suppose!

If you do find yourself in Ensenada (or TJ for that matter) you can take a tour of the wine region.  Slightly out of our budget and time frame we passed and just drank a very nice bottle instead on our balcony from Ensenada Wines, where we managed to swap a tenner for a really nice bottle.  The nice dude was collecting sterling for his dream trip to London, and didn’t have an orange one so was happy to oblige, as were we.

Making plans for moving on.  Baja is roughly 1500km in length and has ‘Highway 1’ which connects Tijuana in the north with Cabo San Lucas at the south.  Trying to plan a journey to a small place 8 hours south was tough as the bus schedule didn’t seem to stop there, so we booked a nice 13 hour bus to a place called San Ignacio, leaving Baja Norte and entering into Baja Sur.  (We later discovered the bus stops pretty much everywhere)  The landscape we passed was unreal.  It’s practically all desert with scrub bush, cactus and rock formations dotted around. 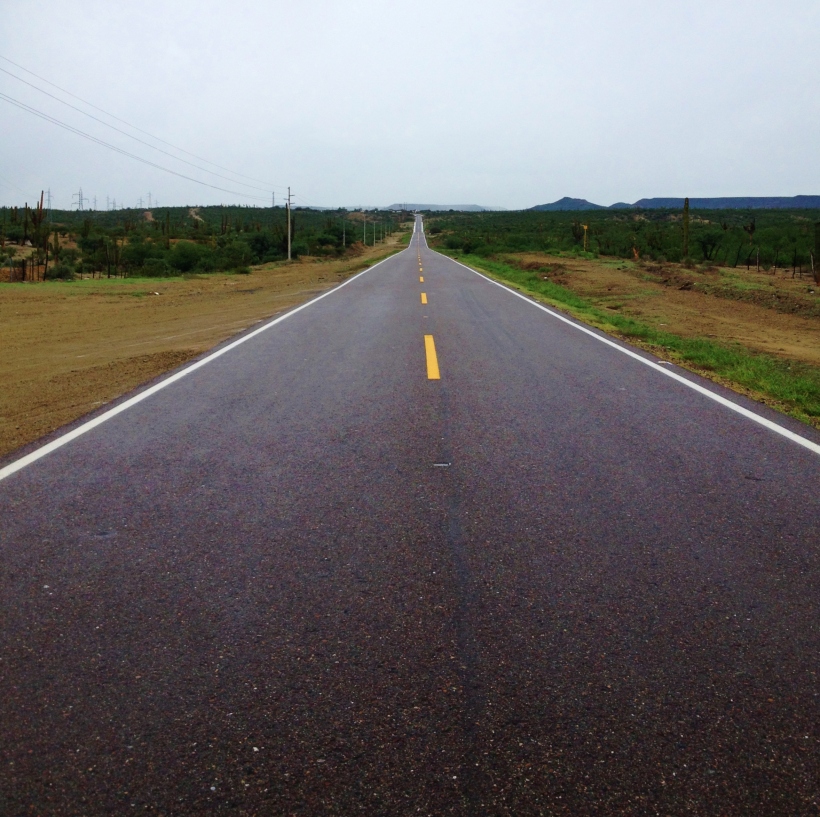 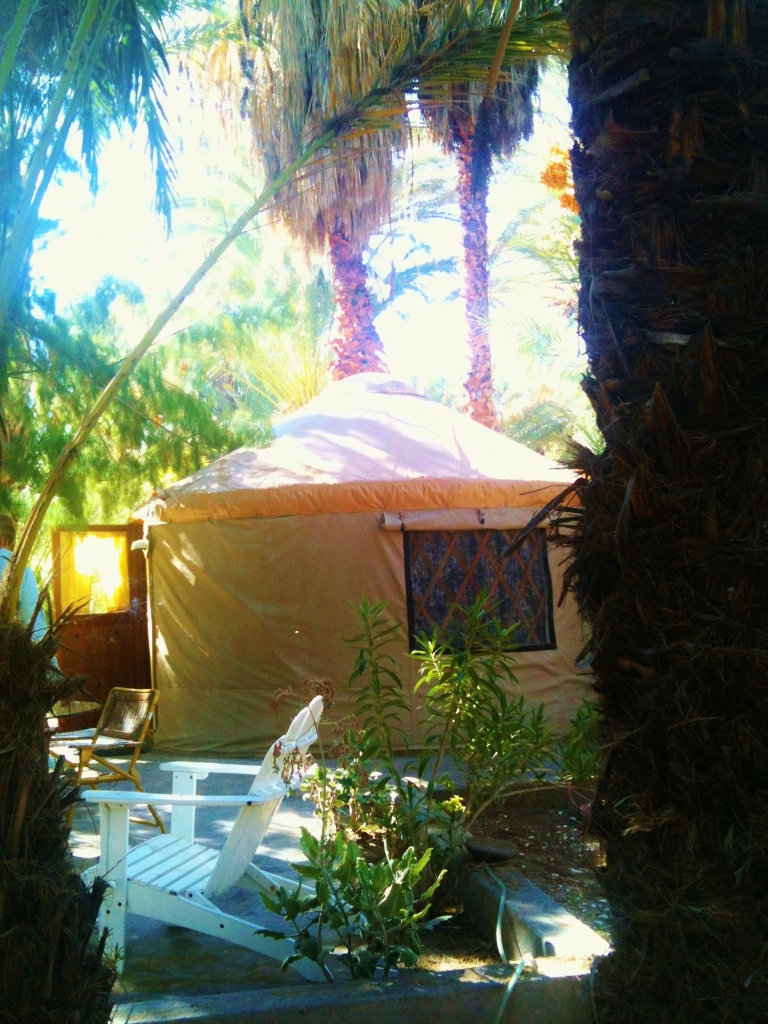 Arriving at San Ignacio at 11:30pm, and after 7 poor quality Spanish dubbed movies we arrived at the Oasis town that is San Ignacio.  A real life oasis like you see in the films… We splashed on the room.  Well, a yurt.  It was a great place and I can’t recommend it enough. San Ignacio Springs.  If not for the home cooked breakfast, then their access point to the oasis lake/lagoon with use of kayaks and paddle board.  Two nights spent here mooching around, checking out the small town and living it up in a yurt was followed by a 6 hour bus ride to Loreto further south. 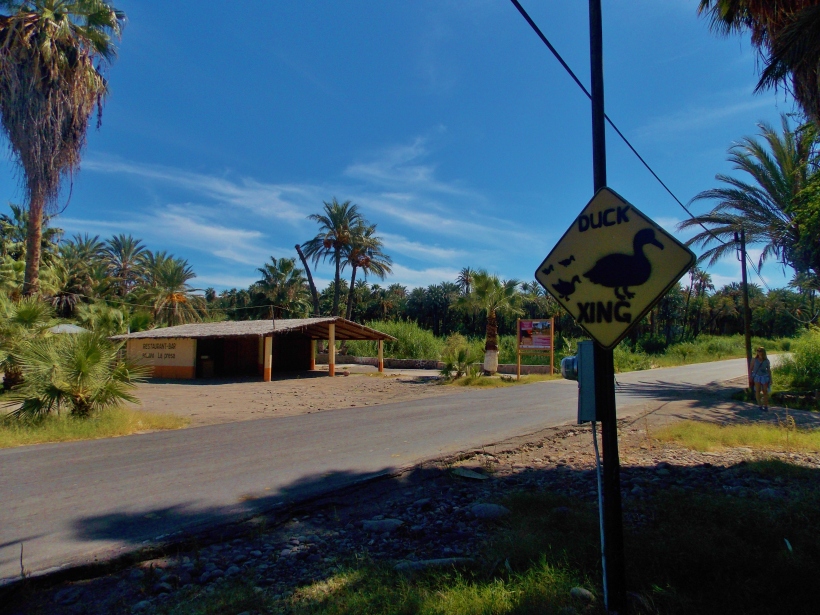 Loreto, we had been told by some snowbirds we met, was a beautiful place where they all seemed to have

holiday homes.  After enjoying some extremely pleasant weather we arrived to rain and dark skies.  Loreto had suffered in the past from hurricanes and a recent one had caused flooding in some parts of the town. One hotel we looked at tried to do us a room even though the rest of the place was flooded…

We decided to stay one night (not the flooded place of course), enjoying some fine margaritas and tacos on the square being overlooked by the oldest mission in Baja from the first settlement in 1679.  Not much going on we headed south after one night. 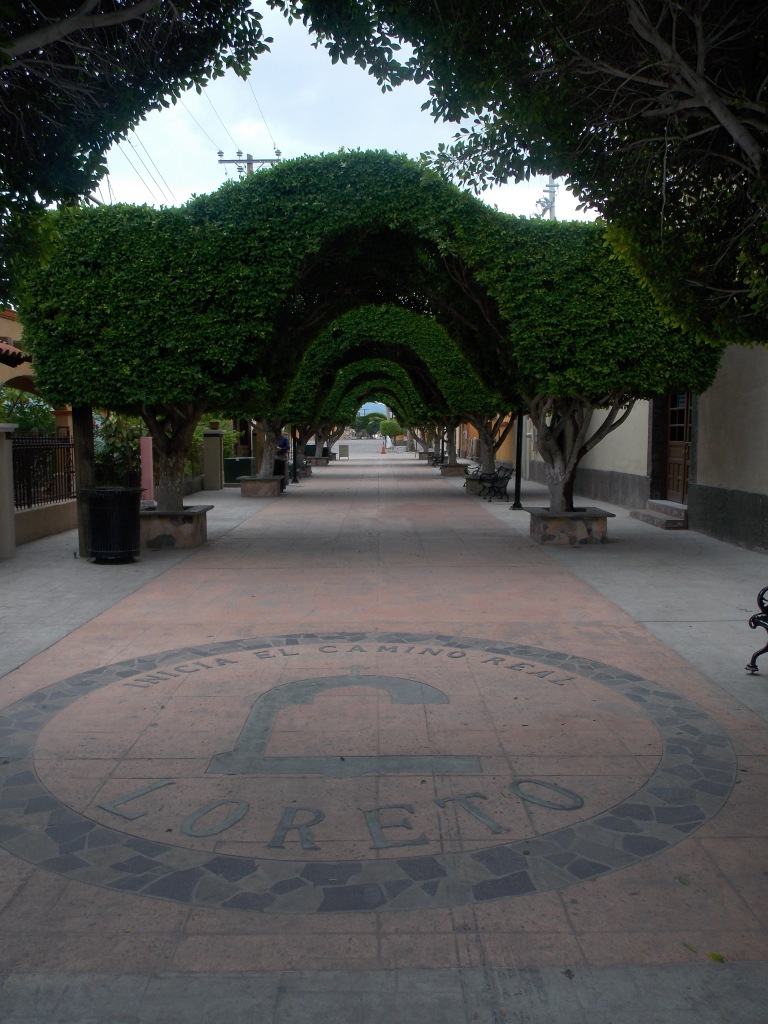 Five hours later on the bus we hit La Paz.  We arranged a cheap hostel for one night.  It was awful.  Worse than the night I spent in the cells in SE London.  And there were many many mozzies.  Finding the concrete beds and lack of running water uncomfortable we headed out into a massive rain storm.  When it rains in Mexico it doesn’t mess around.  The next day we found a nicer hostel, Baja Backpackers, where we happily checked in for three nights.  The weather changed and the rain had gone, as had the evidence of the previous night’s storm.  The Bajans were out early and efficiently dealing with the consequences of having no drainage system. 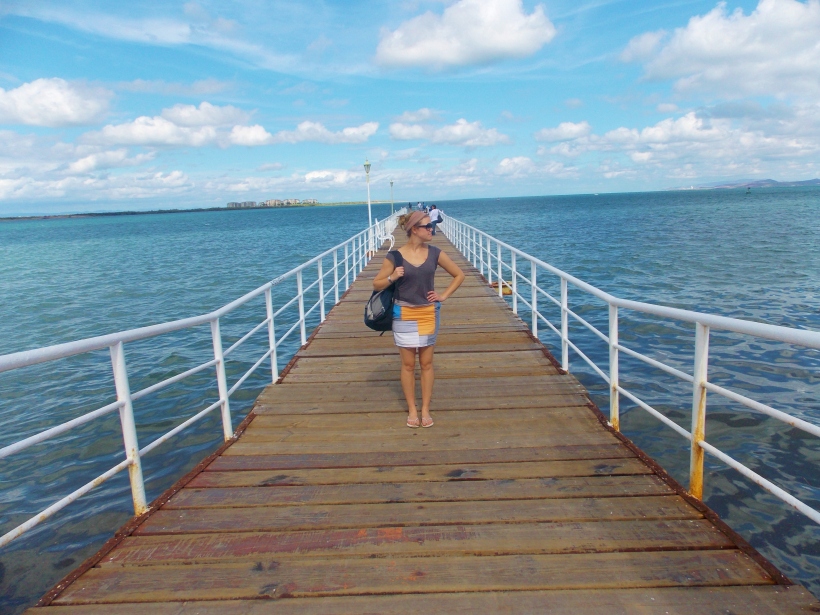 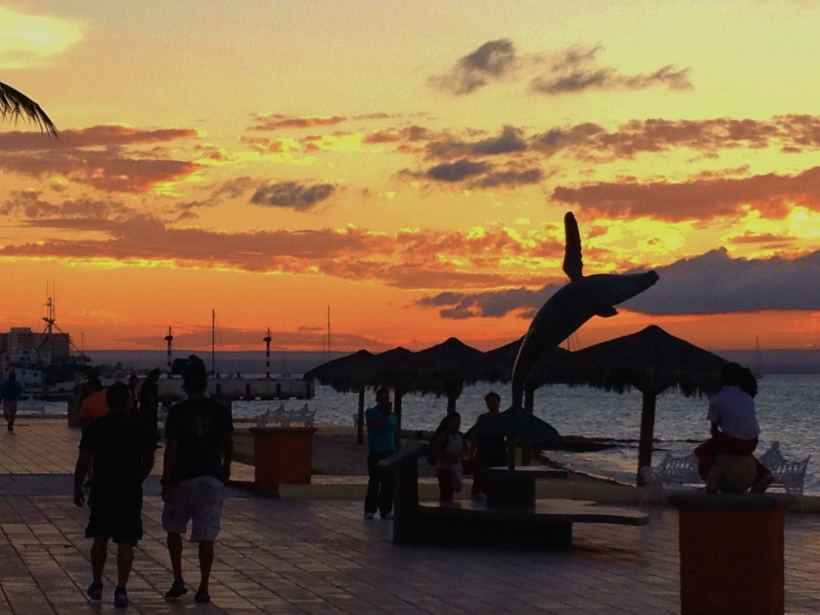 La Paz is a great place.  Strolling along the Malecon at night, each time we were offered a different beautiful sunset.  (I had to be careful not to turn this into a gallery of sunset photos).  Isla Espiritu Santo  is near and offers diving and the chance to swim with sea lions.  The sea was too rough so we couldn’t make it out there to hug a sea mammal.  We went out of town to Tecalote beach, which stares straight at Espiritu Santo  We hiked through the desert terrain and up some hills for a couple of hours before heading to a calmer beach called Balandra where the crystal clear shallows were 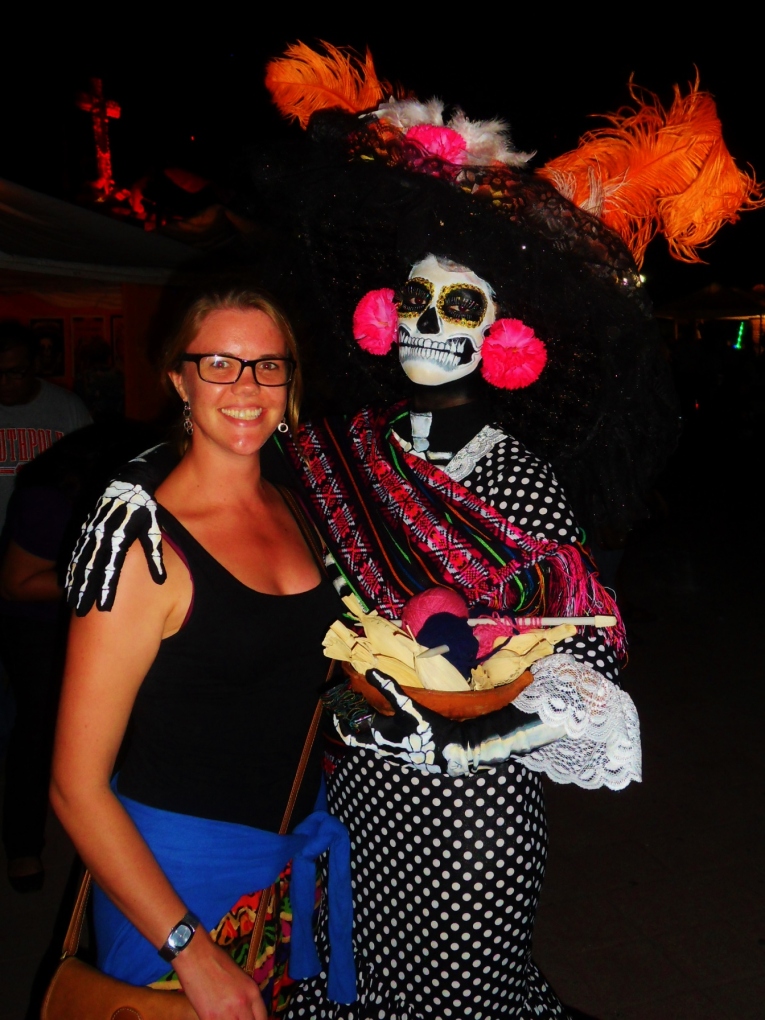 as warm as bath water.  ‘Dia De Los Muertos’ brought another ‘Festival De Catrinas’ (a better one then Ensenada’s offering) with music, dancing and a selection of shrines in the local town. Fish tacos running you the equivalent of roughly $1US each at Super Baja Tacos, where you can cover them in as much slaw and salsa that you want was a top eat, and attended for nearly every meal.  It was a difficult place to leave but the ferry ride to the ‘mainland’ was booked and were already thinking of the next stop on the ‘mainland’.

Baja was beautiful.  My advice would be if you are planning on going would be to get a car/van so you can see the rest of it.  Stop off in the desert overnight to gaze at the stars or drive out to those beaches unreachable to backpackers (unless you hitch of course).  Or just go and chill at the springs for a few days…

If you’ve made it this far, gallery link here!  Thanks for reading.