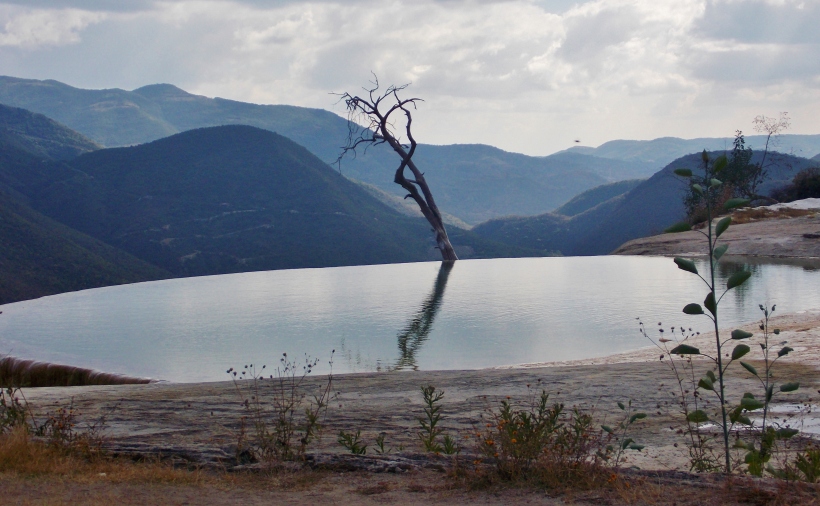 We tackled the DF subway system one last time, this time with our packs, after visiting the tasty bakery Ols had previously championed for some Mexican cheese, ham and jalapeño pasties for the journey.  We were moving on to Oaxaca City, and it is something we had both been looking forward to.  It is in Oaxaca State, which in itself is the same size as Portugal.  As always, we were not sure how long we were going to stay in the city, and also, if we would adventure further into the state and visit the much talked-up coast of Puerto Escondido and surrounding beaches.   A 7 hour bus ride later took us through some excellent scenery, this time the seemingly endless hills were dotted with various cacti as we snaked round the passes.  The driver warned us of delays of the ‘environmental kind’.  We thought it was just a mis-translation, but when the storms came and parts of the surrounding hills were falling into the road, I was confident Ollie’s Spanish was still up to scratch.

Had enough of this waffle? Click here for the pictures.

The colonial center of the city promised us beautiful tree-shaded plazas, colorful scenery and a bustling artisan crafts scene where Ols could dispatch some pesos.  On arriving at the bus terminal we joined up with a Canadian called Lee and he came with us to Hostel Pochón.   Soon we were out of the door and eating tortas the size of our heads on the recommendation of the French contingent at the hostel.  We all settled in for the night at Pochón, and exchanged stories round the table with the many other residents.  Really nice place…

The first day and we were out of the door, walking round admiring just how pretty the town is.  But my god…it’s a tourist trap.   Being sort of prepared for that, it didn’t bother me as much so we just joined in the natural flow, past the churches, boldly coloured buildings and into the Zócalo (main square).  Being in Mexico over a month now has given us only a tiny insight into the local way of life for many people.  What I have been impressed with is the quality and use of communal spaces.  The local squares or plazas are places where people come to sit and just be.  With their family or friends.  They may have an ice-cream, play the trumpet, practice a dance routine or have their shoes shined.  Unlike the UK, there are no urine soaked Tennants drinkers growling at passersby with tobacco stained whiskers.   We found ourselves just sitting enjoying a fizzy pop, watching the world go by. 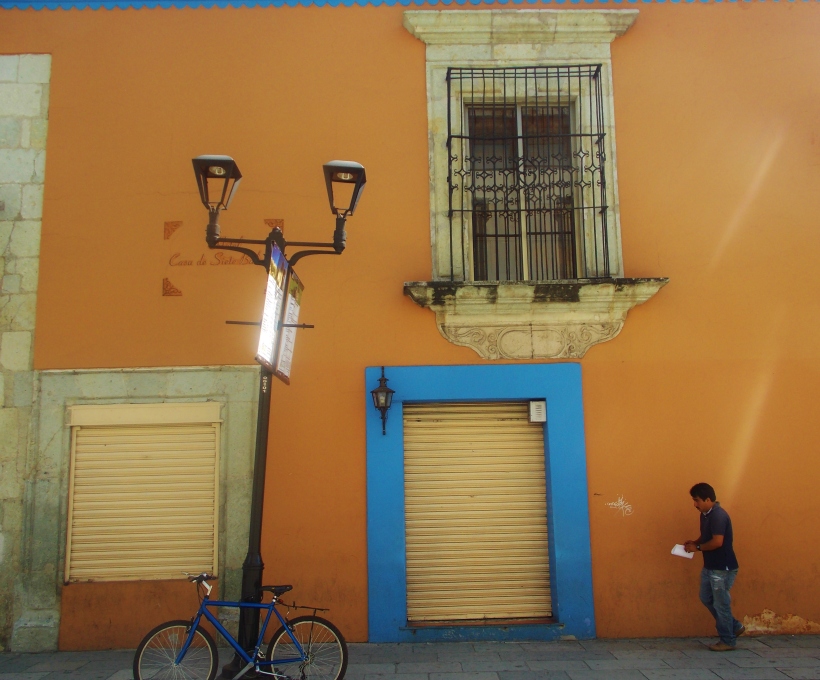 Onto the local food market, we walked around admiring the selections of chillies, Oaxaca-style cheese, meat and mole Sauces.  Mole described very simply is like Mexican curry sauce, and Oaxaca is known as the land of the seven moles, with the main one, mole negro, including locally grown chocolate.  After doing some grocery shopping and picking up some chapulines (grasshoppers) we headed back for a chilled day and a rest.  Even though Lee was a vegetarian, he still enjoyed the tasty little garlic and chili roasted insects. 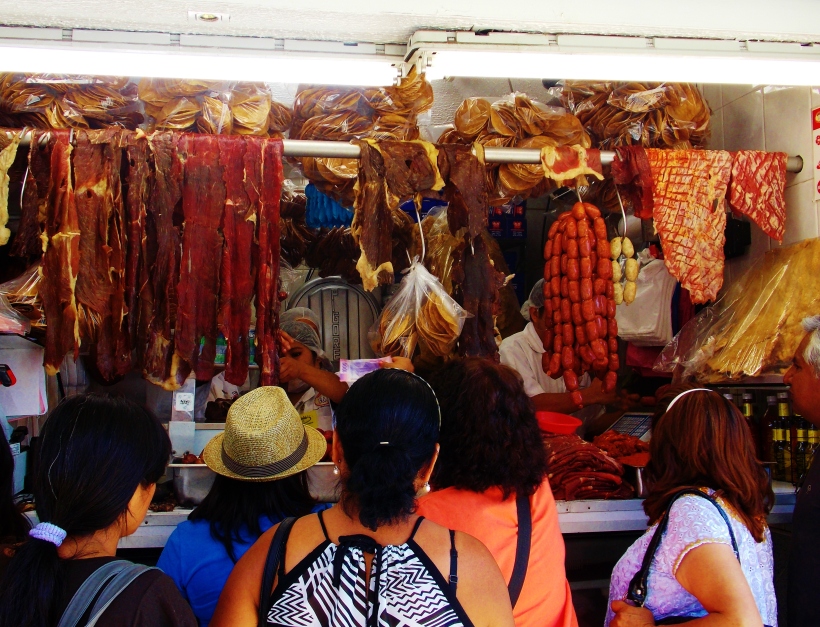 The next day, we took a tour of the local area and found ourselves with two older Colombian couples.  The first stop was a tree.  Not just any tree, but the 1500-2000 year old tree of Tule.  It’s huge and dwarfs the surrounding buildings.  The second stop took us to the village of Teotitlán del Valle, where they are famous for weaving, using natural dye made from a base of Cochineal bugs that live in cacti.  The bug is squashed, then mixed with things like chalk, lemon or leaves to achieve different colours.  After, we headed for the Don Agave Mezcal distillery, where after a short tour, the Colombians helped us along, trying various tipples and eating more chapulines which cleanse your pallet after a harsh sip of mezcal, like a sorbet might during a meal.  Now the worm: most people have heard of the worm in tequila.  The worm is never in tequila, only mezcal and is just a marketing gimmick.  I downed the worm from the bottle and can confirm, with some disappointment, that it does not get you impressively drunk/high.  It’s just a worm… 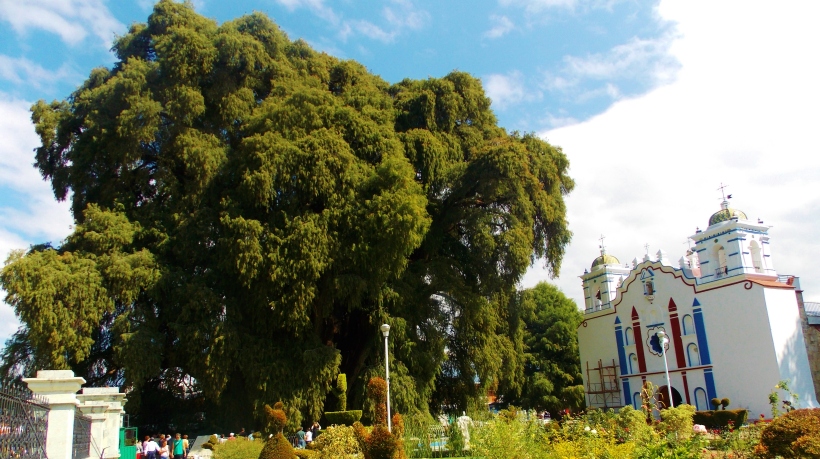 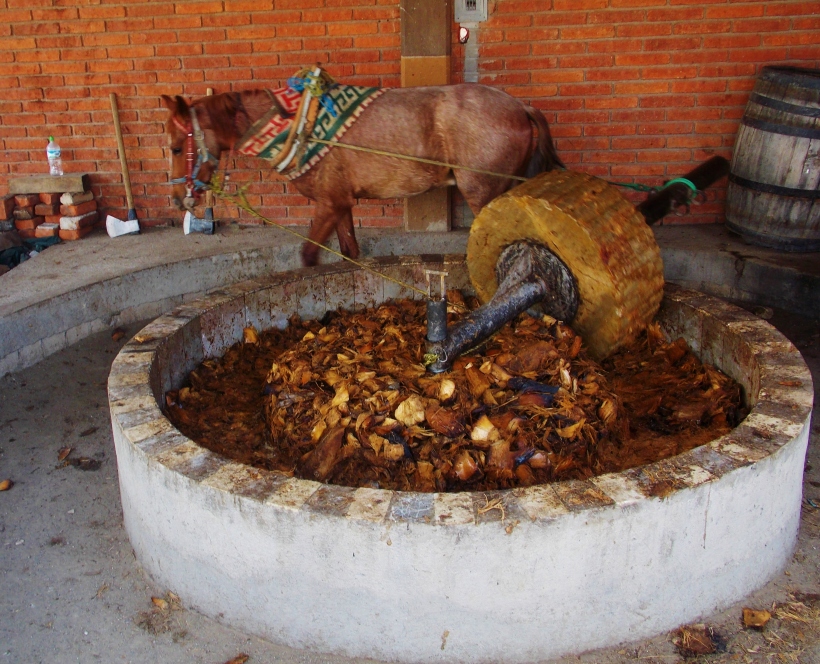 After Ols was told some dirty jokes in Spanish by an increasingly intoxicated Colombian lady, we jumped in the van and headed to Hierve El Agua; two large white rock formations similar to stalactites look like waterfalls cascading down the cliffs.    Hierve El Agua, meaning “the water boils” in Spanish, has naturally bubbling (but cold) mineral pools, that appear to disappear over the cliff.  A beautiful spot, where we sat to soak it all up until a chap called Manuel (or Manny Pacquiao as he styled himself) arrived and spoke at us in a friendly, yet aggressive manner.  After some nonsensical conversation with our new-found fried we headed back to Mitla, a town with Zapotec  ruins.  These were pretty impressive structures, with a chance to go into some burial chambers.  The whole day was a great little tour, and for a value of M$150 per person it was incredible value for money. 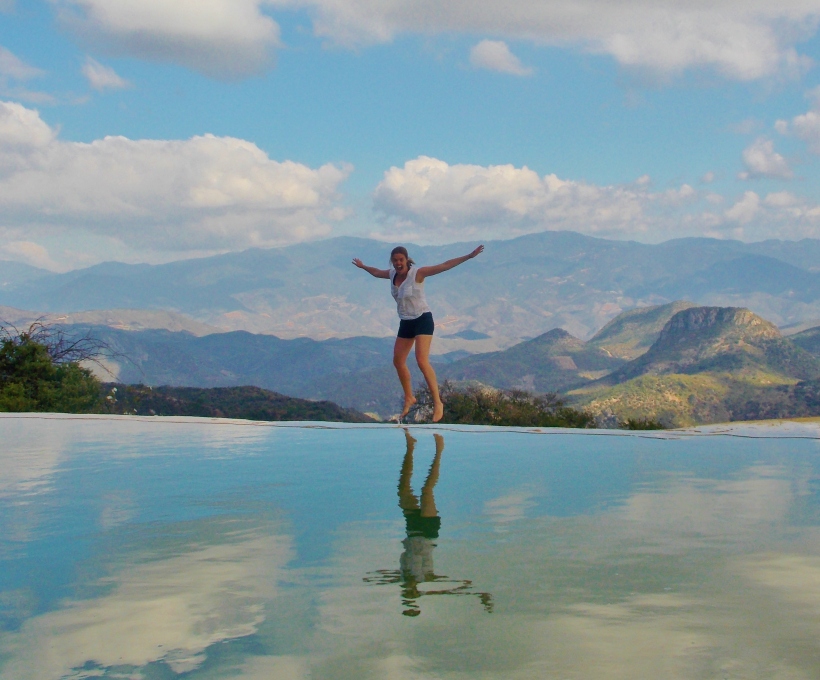 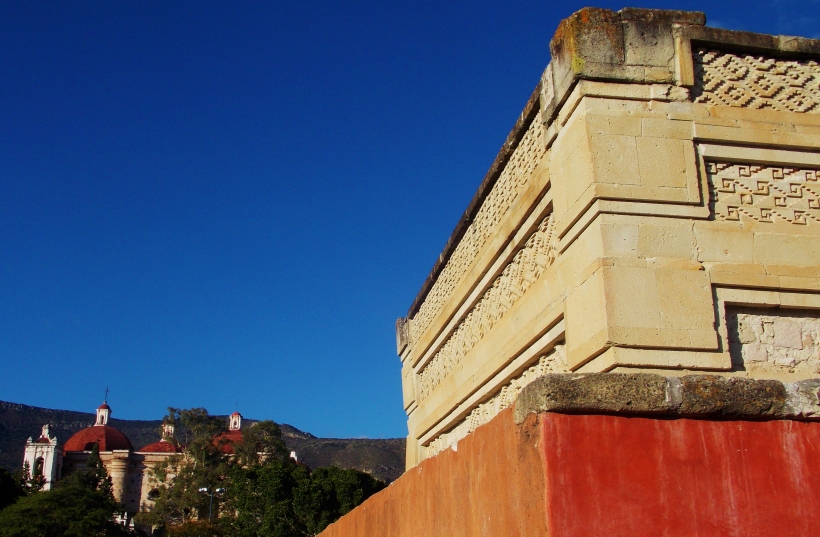 Our last day was similar to the first, idling around the markets and admiring the town and square.  Oaxaca city centre is an extremely beautiful place, which it would be easy for some to spend lots of time in.  For me it was far too touristy, being a well-established must see place in Mexico.  Ols was also disappointed by the lack of ‘local crafts’ promised, as the markets we visited yielded only clothes mainly.  There may have been another market somewhere, but we didn’t find it.  We decided not to go to the coast, but everyone else we met was heading there.  We decided to start our descent into Guatemala instead, by travelling to San Cristóbal de las Casas via night bus.