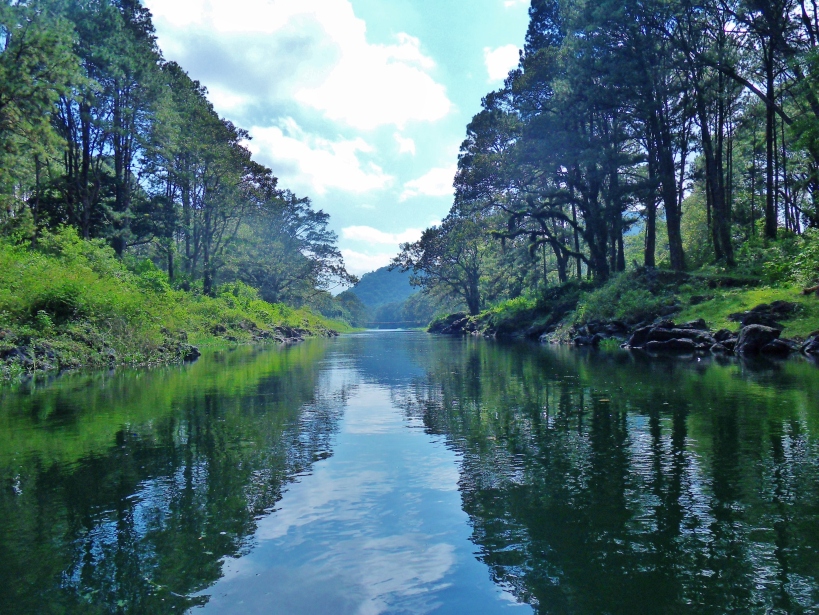 An early morning ferry ride took us away from Roatán and back to La Ceiba, where we stayed no longer than required and headed for a local bus to a town called La Guama.  We then changed onto a chicken bus bound for Peña Blanca.  It’s a small market town near Lago de Yojoa, our third stop in Honduras.  It was about a 9 hour journey and certainly not the worst so far.

The bus wasn’t this bad…

To skip straight to the full photo gallery, click here

The journey through the country has given us some incredible views of the unspoilt green vistas that Honduras has to offer.  The bus bounced into this bustling market town along to a reggaeton soundtrack and before we knew it we were at the gates of our humble lodgings for three nights, D&D Brewery. It’s going be tough to talk about the views and not the beer on offer here, but I’ll try.

Lago de Yojoa is the largest in Honduras with a surface area of 110 miles and an average depth of 50ft.  It is surrounded by steep green mountains and two National Parks. It is also believed to have around 400 species of bird.

Let me talk about D&D first of all.  The brewery has been there since 2003 (I think?) and has a selection of accommodation from dorm to cabin on offer at pretty good prices.  The food is real tasty and the beer is, well, delightful.  No sooner had we checked in, I found myself with a chilled glass of porter sitting round a fire pit amongst the forest the brewery sits in, with various types of hummingbirds fluttering round my head.  It is certainly a nice spot and a great relief from piss-poor lager since setting foot in Tijuana.

You try and take a photo of a humming bird then! 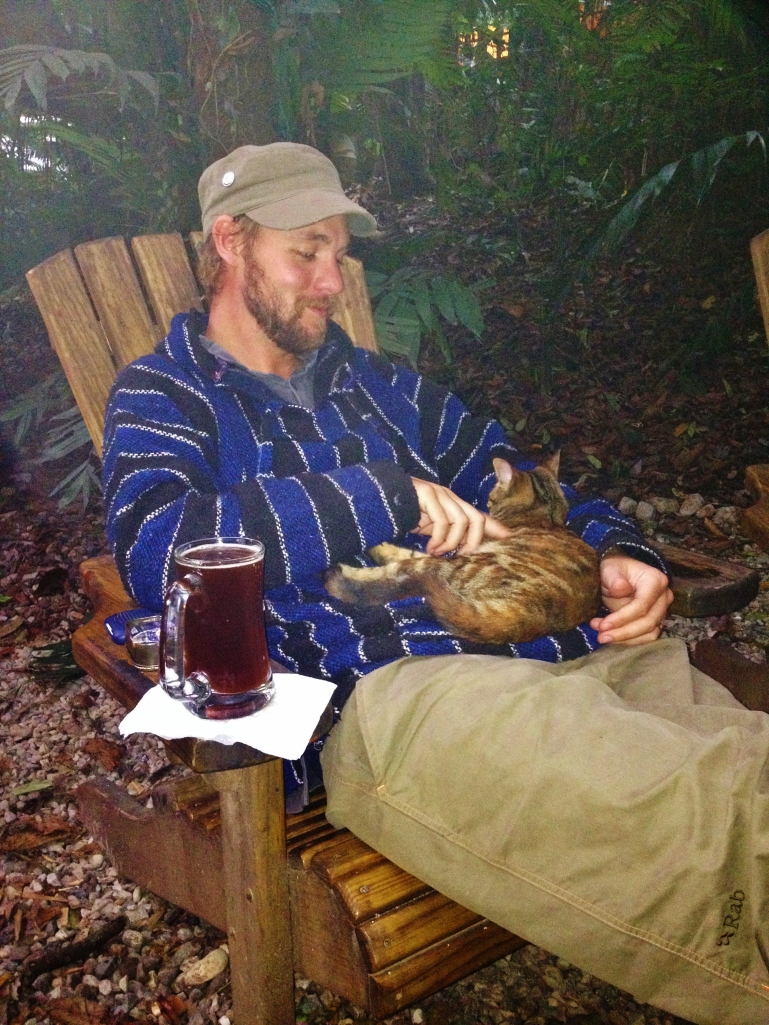 There is plenty to do in the area and the brewery is set up to help with guides for both trails and nature.  We didn’t use either and made our own way round the area.  The first day took us to the 43m high Pulhapanzak waterfall where we marveled at the sheer size of it and got pretty wet just looking at it.  The park it sits in is evidently popular with Hondurans, with many swimming in the river above the falls (not too close obviously) and picnics taking place in the green areas surrounding it.  Having a walk around the area and the surrounding hills we are impressed at just how picturesque it all is.  The green hills (that seem to surround everything you look at in the country) at times can seem like a view from the Peak District back in the UK. 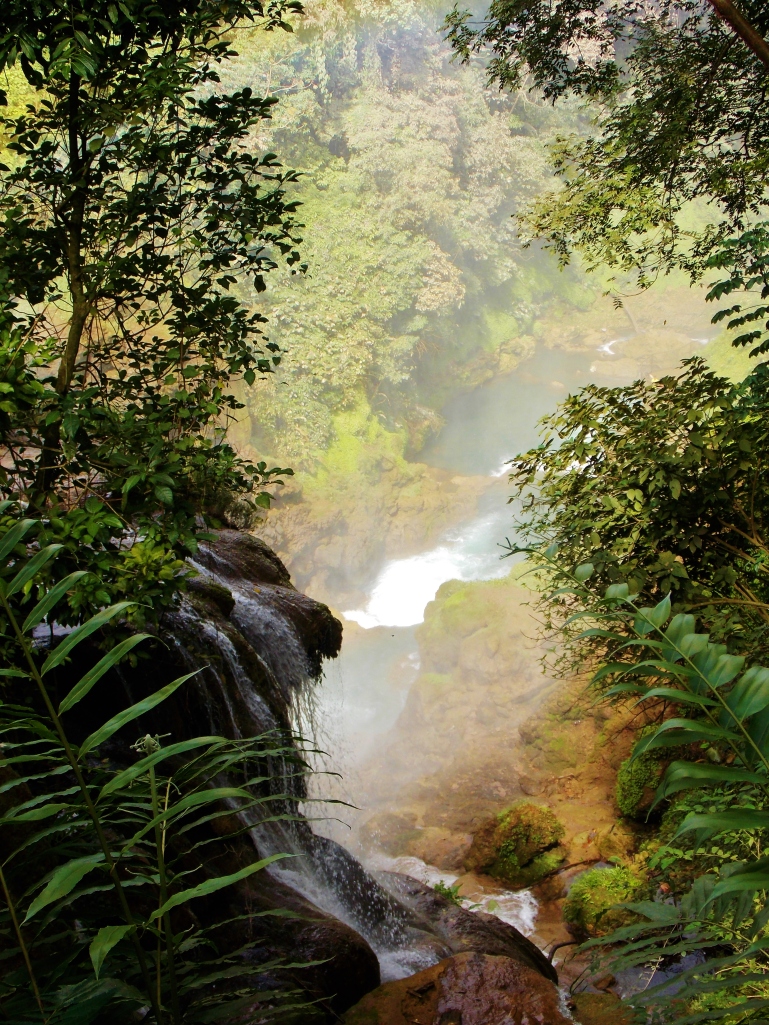 Looking over the top of Pulhapanzak waterfall

Further up stream from Pulhapanzak

The second day, we felt we should try and work off some of that beer we indulged in the night before and rented a kayak from the brewery and went out onto the lake.  After spending the first half an hour trying to go a direction other than left, we were out of the canal and onto the lake.  As I have said, the lake is surrounded by a mountainous area, mostly extinct volcanos which, given the size of the lake, can seem to go on endlessly into the distance.  The lake is a great spot for bird watching; of the possibly 400 on offer we saw a big black one, a grey/blue one with big legs, one that looked like a heron and quite a few ducks.  As you can see, we would have benefitted from the bird-watching tour.  There was just no one there apart from a bog snorkeler and a couple of row boat taxis.  It is a great place to spend some time with your thoughts and soak up the scenery. 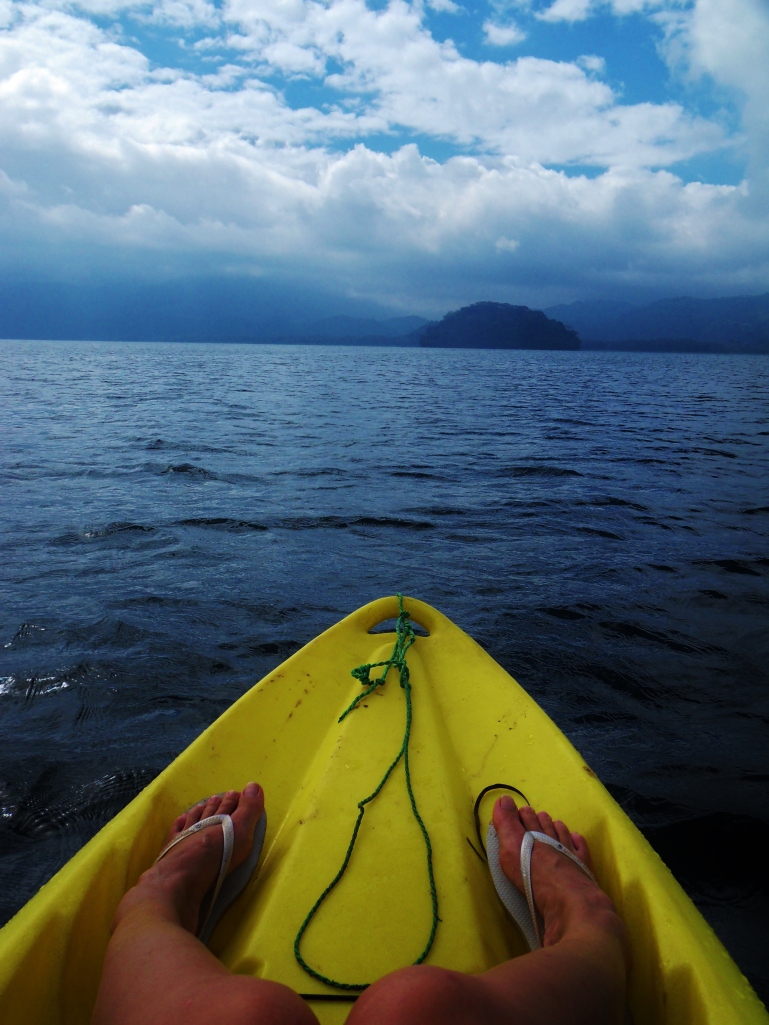 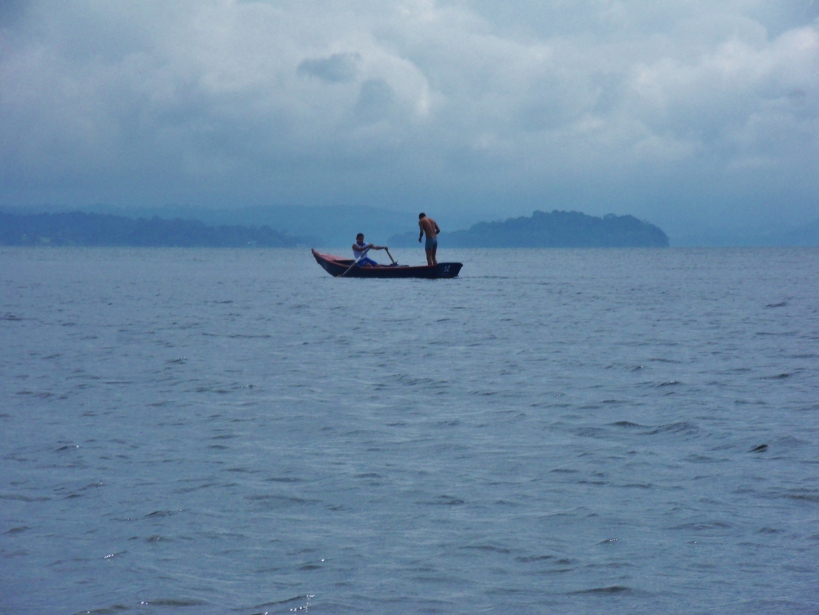 After perfecting the art of going forward

Stunning views on the lake 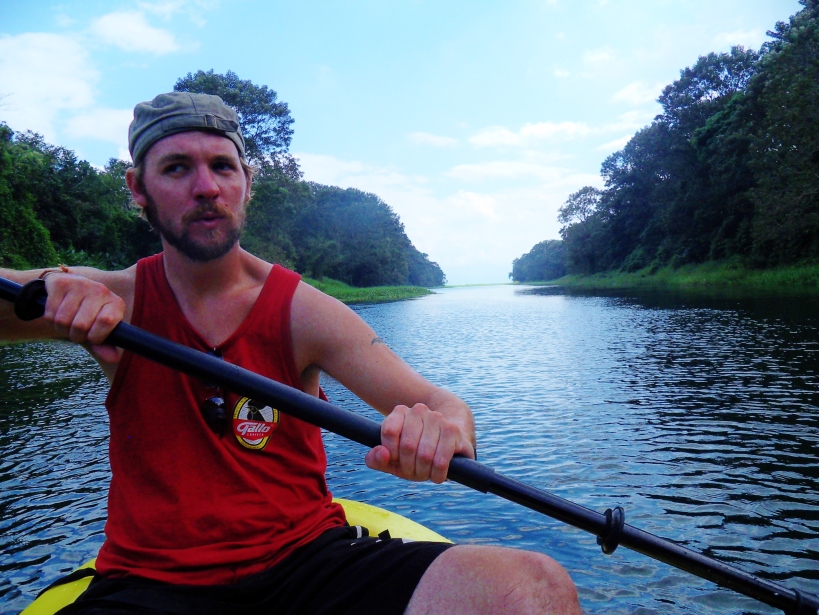 A pretty amazing three hours spent out on the lake was only beaten when our ride back to the brewery turned up and it was a normal sized mini cab, who proceeded to drive us back with the lion’s share of the  kayak precariously balanced out of the boot.  That night we took full advantage of the beers on offer (well, mainly the porter if I’m honest, the super attentive Walter knew what my usual was and kept ‘em coming) and sat round the fire pit educating a Welsh couple we met on the variety of birds that can be seen on the lake.

It was a hard place to leave.

Our next stop, Copán Ruinas, was 78 miles as the crow flies, but due to our pledge to travel by public bus only from now on (mainly because it’s really cheap) and the lack of connecting roads, this journey took 10 hours, two of which were spent eating poor-quality fried chicken in the delightfully strange place that it San Pedro Sula bus station.  However, the journey cost a total of $18 for the both of us and the dancehall soundtrack on the first chicken bus was certainly entertaining, and offset the worry about the hole in the floor of the aisle.  The weather was poor all the way, as Honduras is having a cold and rainy snap at present.  However, we got to see more impressive scenery, from mountain ranges, lush verdant hills, foggy moor-like areas, and generally more shades of green than I knew existed.  At the same time we rolled through some pretty poor areas.  Attached to every post and board you pass is a flyer for the recent presidential election.  All the candidates offer enormous grins and a generic slogan for some kind of change, but how much change will they bring for the people of these areas?  However, everyone we encountered was friendly enough and we only attracted the occasional stares of curious locals, well Ollie did more than me!

Copán Ruinas, is a small cobbled street town with a hint of colonial charm, and is pleasant place to spend a day or two.  The reason for stopping by is to visit the Mayan ruins of Copán, whose construction dates back to around 100AD.  It was the southernmost part of the Maya world, one we have dipped in an out of since southern Mexico.

After a delicious baleada (Honduras’ version of tortilla and beans with other stuff, kind of like a kebab burrito I suppose) we walked the 1km out of the town to the archeological site.  The visitor centre is not even a month old after a renovation project with the Spanish, and as such seems completely alien to the rest of the country.  A short walk into the park and we come across the first collection of ruins.  Some people have said that this site doesn’t compare with other such as Palenque or Tikal, but I disagree.  Although Tikal is impressive in its sheer size, Copán has its well preserved hieroglyphs and various intricate rock carvings that have stood the test of time against the elements.  It’s set in a forested area, framed by the impressive hills I have previously spoken of that quite literally cover the west of Honduras. 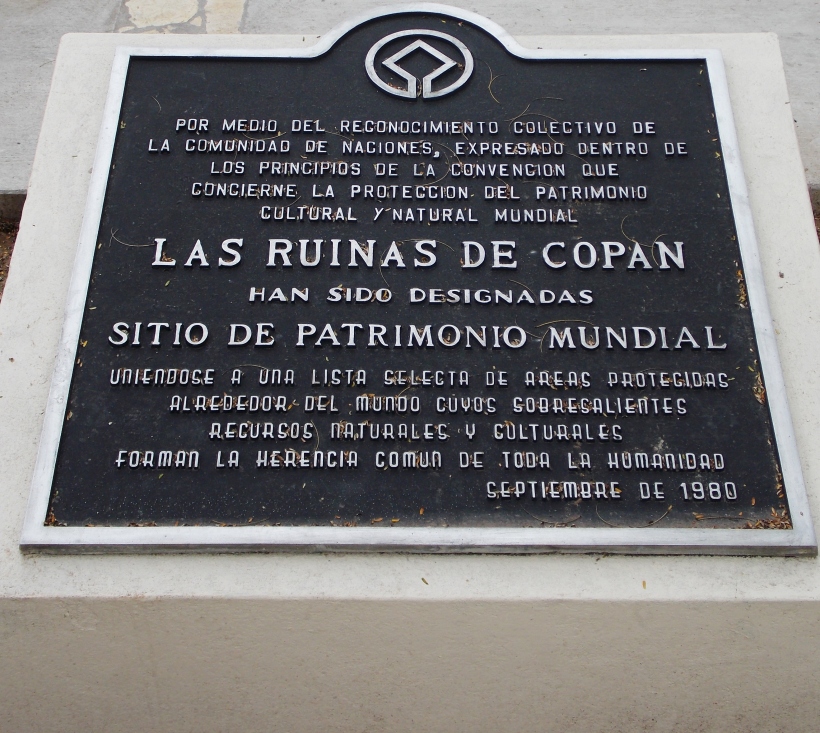 The macaws that welcomes you to Copan 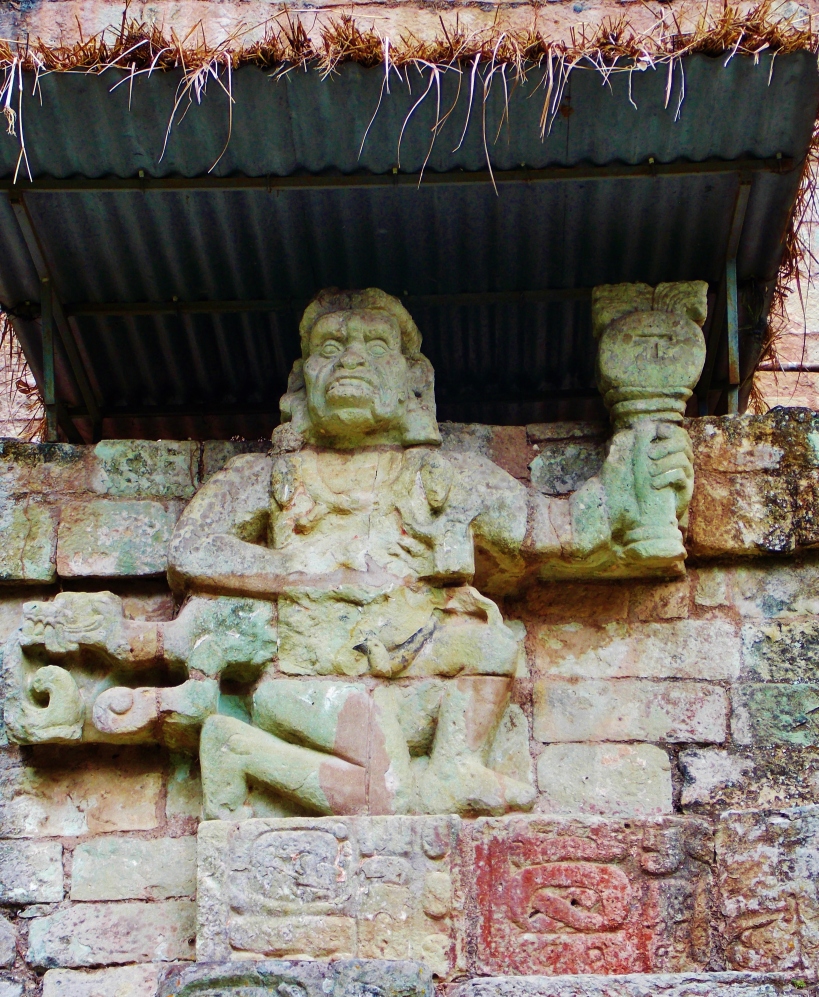 We spent three hours hopping around the site, scaling the large steps and admiring the pre-classic Mayan carvings and stele (carved blocks). There is a particularly handsome hieroglyphic stairway of 72 stone step levels made up of 2200 glyph blocks forming the longest known Mayan hieroglyphic text. We pretty much had the site to ourselves which was surprising seeing as it is the real main draw to the Honduran mainland for tourists.  The second most visited site in the country after the Bay Islands!

Pretty impressive scenery all around

Close up of carvings on the stairway

A great treat were the red macaws that inhabit the site, some of whom are exhibitionists happy to pose for pics, and others positioning themselves above you in the trees for reasons I’m sure you can guess.

After the a day at the sight we headed back to Copán town for some refreshment at Twisted Tanya’s in the form of 2-4-1 margaritas followed by a return visit to the Balaeada Inn (one block SW of Parque Central, next to ViaVia) for some more amazing cheap eats, and an early night.

Next stop El Salvador. Honduras seems to have flown by.  I will not miss the random men holding shotguns (“oh, he has some kind of logo on his hat, that’s fine then”). Even the bacon delivery van in this country is accompanied by a chap with a pump-action shotgun in his hand. Apparently it’s because they only do transactions in cash so by the end of his round the delivery man has a few thousand dollars on him and would be too much of a target. Hondurans seem to have little faith in law enforcement so take their own precautions. I also won’t miss the wet and sometimes gloomy weather we have had and the need to continuously back track on ourselves to travel through.  Still, a pretty handsome place!

3 thoughts on “Lake Yojoa and Copán Ruins – A handsome lake with some top beer, the last of the Mayan ruins and some pretty hard travelling.”